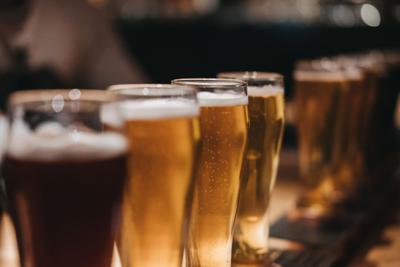 With beer-to-go from the place where it is brewed replacing gathering around the bar, a back-to-the-basics paradigm has taken hold in 2020.

Throughout this pandemic year, Indiana craft beer has added new brewpubs and down-sized some already established. Why we savor a well-made ancient product hasn’t changed because of  COVID-19. A good beer is meant to be enjoyed under any circumstance.

Beer writers have been remarking on lower alcohol content brews as a valid consideration. Some have noted patrons are more often returning to a satisfying beer than are chasing after the forever new. Perhaps most telling is the growing awareness of craft spirits as a beverage preference over craft beer for a new generation in their early twenties. What's on the menu at brewpubs is changing.

From the outset, bread and beer were home-made. It still is in many parts of the world, including the 200-year-old city of Indianapolis and in Indiana even before statehood. Four basic ingredients — water, malt, yeast and a preservative — have been reconfigured to astound the imagination and to bring a healthful beverage to wider and broader experiences of taste.

Innovation alongside tradition is the exciting impetus of the brewing process. Art meets craft meets ingredients meets packaging, meets marketing — it’s an industry of layers within a community. We saw what happened in 1920 with the U.S. Prohibition. Layers of jobs were lost, not just in brewing, but extending to agriculture, manufacturing, transportation, marketing, hospitality, entertainment … and onward. True, innovation overcomes repression — reportedly, the first speakeasy opened in New York City on January 18, 1920, the day after Prohibition took effect.

In the same vein, breweries in 2020 responded with nimbleness to shutdowns for the sake of safety. Small brewpubs, serving neighborhoods as a gathering place switched to curbside carry out and then to safe on-site seating, and back to carry out with winter again upon us.

Broad Ripple Brewpub, Indiana’s craft beer leader that opened in November 1990, retains its calm stance and continues to serve its patrons and the industry as a whole with a sense of doing what’s possible. BRBP now rounds out its 30th anniversary year with its Thunderforge 3000 Porter.

“It lends itself to the holiday flavors of bitter chocolate, roasted coffee and cherry, that enhance themselves as the beer warms up,” reads its description.

While Indiana’s premier craft beer competition opted to skip 2020, as did many other competitions nationwide, some forged ahead. Founded in 2019, the World Lupulin Challenge, smaller in scope with an emphasis to recognize the world’s best IPAs and pale ales being commercially brewed in the U.S. and abroad, found a way to judge and award during Fall of 2020. Metazoa Brewing Company was awarded two silver medals for their signature Wicked Pawesome and Puma Thurman.

“Wicked Pawesome, which won a silver medal in the Juicy or Hazy IPA category, leans on additions of Loral and El Dorado hops to give a tropical fruit and slightly floral flavor to this medium, full-bodied IPA,” reads the report from Metazoa.

“Puma Thurman, which won a silver medal in the American Double IPA category, uses a blend of six different hops including Amarillo, Citra, Mosaic, Simcoe, Idaho 7 and Loral hops, to create a hop bitterness that does not hold back — just like the actress that inspired its name.”

“Based on dozens of conversations I’ve had with brewery owners over the past nine months, drinkers’ choices have shifted significantly — mine included,” he wrote. “Brewers have scaled back on experimentation while refocusing production efforts on flagship and core brands, satisfying the comfort many of us get from drinking beers we know and love.

“One upside of the pandemic is that many cult breweries, whose beers were once hard to come by, have now expanded distribution, seeking out new markets as the bars and restaurants of their hometowns have dialed back business,” observes Kennedy. “Take 3 Floyds, for years the holy grail for beer geeks outside the greater Chicagoland area. As of August, many of its sought-after brews are available in my local bodega, at the Target down the street, and at grocery stores all over New York. Permanent Funeral,  an apocalyptic pale ale  that was once traded for and shipped by collectors around the country, is an over-the-top, aggressive IPA that I found myself returning to when I needed relief from the stresses of the year.”

Ryan Brower posted on Gear Patrol,  “The best beers of 2020 [including Three Floyds] were not consumed amongst friends, shoulder-to-shoulder inside packed bars and breweries, as they should've been. Instead, they were consumed at home, presumably during Zoom happy hours and, probably, at a higher rate in early November. 2020 has changed where we drink and buy beer…”

"The alcohol beverage market has been about innovation and evolution of American consumers looking for different drinks in different places. COVID has just sped that up," Jones said.

Jones pointed to the current economic recession as a hospitality-driven recession, hurt badly by pandemic-related restrictions. Looking ahead, governments seeking a source of revenue, likely will want to increase taxes on alcoholic beverages.

Indiana brewers are putting a positive spin on what’s ahead for them and the communities they serve. They are serving craft spirits and cocktails along with wine and ciders.

Safety on-site is a prime consideration. Daredevil especially notes, “Daredevil Hall and the Speedway Brewery are both newer buildings that meet all current code standards for air filtration including having HEPA filtration and frequent air turnover.”

Every week new postings arrive from statewide noting new batches of favorite seasonal and regular lineups, and equally safe ways to gather to keep a sense of community intact. Everyone is reaching out to help each other.

Sun King is featured at Wendy’s — not as a beer on tap, but as a food ingredient.    A tweet from Cory Still Sun King’s community development manager, informs, “Sun King has partnered with Wendy’s for their Pretzel Bacon Pub Cheeseburger … drizzled with a warm beer cheese sauce that is made with Sun King’s GABF Medal Winner Sunlight Cream Ale & Amber Has Two Moms.”

Four Day Ray is offering cocktail kits along with their established menu of beers for easy carryout.

Upland’s five locations are celebrating the holiday season with a burst of newly-brewed Petal to the Kettle Tart Series and vintage Sour Packs. They have a photo of bags of carryout dinners pre-ordered for curbside pickup. Whatever it takes to be relevant in the time of COVID.

In its newly built CityWay location, Taxman features live music with seasonal farm-to-table food, craft cocktails, wine and live music alongside their iconic beers to remind us to start the paperwork for IRS filings.

Mad Anthony is offering a selection of vintage ales from their personal cellar. “Like fine wines, these ales improve with age,” they emailed. It’s a drive to northeast Indiana if you’re game for an adventure.

Wedgewood Brewing in Middlebury is building out a new brewpub to open early 2021; curbside pick-up is at their brewing facility off of US 20 while .

Kokomo-based Half Moon restaurant & brewery has never wavered from its focus on food and beer pairings, now in a safely reconfigured dine-in format.

Check out what’s happening in your neighborhood.