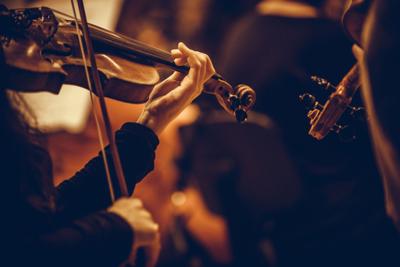 "History just was made," pronounced a fellow patron at the Jan. 18 Indianapolis Symphony Orchestra concert. The audience was on its feet, applauding, shouting bravo, calling back Maestro Urbanski multiple times, applauding even louder when he urged the entire orchestra to rise yet again, to be recognized.

The audience's usual stampede to get to the parking garage did not universally happen. Many of us remained standing at our seats, or in the aisles, exchanging superlatives.

"Krzysztof came as a promising young conductor; he's now on his way to becoming a great conductor," concluded my fellow patron. "He's not there yet; on the way." I agreed, as did others within earshot. And the other point we agreed upon was how splendidly the ISO players have come along with him, with this program being a pinnacle. Reflecting on what we saw, we also noted it's a tip to youthfulness working alongside experienced professionals in all the sections. The excitement continued into the lobby, where a Beethoven image as a cut-out swayed above us. Even at home, for a late supper, the toasts were birthday-centric.

So what did happen on Jan. 18 to bring us to our feet, and to send me to my bookshelf and the well-worn copy of "Milton Cross' Encyclopedia of the Great Composers and their Music." I once again thrilled to Milton Cross' imagery: "Compare the slight formalized, music of the Second with the towering majesty of the Third; a basilica stands side by side with a cathedral.

"[Beethoven] was giving his musical concept of a hero, not a military hero by any means," continues Cross in his text, "but a hero of the spirit who carried to ultimate victory the banner of some high mission."

Yet it was more than the 'Eroica' in and of itself amazing no matter how it is played. It was the wholeness of the ISO program, a coming together of separate parts as a majestic wholeness, ultimately carrying "the banner of some high mission."

A bit of the backstory: As part of their year-long BTHVN 250 tribute, under the leadership of Music Director Krzysztof Urbanski, and through underwriting by ISO patrons, the ISO commissioned new works by young composers from worldwide to be played on the same program with each of Beethoven's nine symphonies.

"The invitation is to write a short 5-to10-minute piece that has been influenced by that symphony," informs the printed program. Beethoven was 25 when he wrote his first and second symphonies, 32 when he began composing what now is considered the benchmark Symphony No. 3 in E-flat Major, Op. 55 ("Eroica").

When it premiered in Vienna in 1805 it was not a rousing success. Beethoven had moved beyond the expected pleasant-to-listen-to model to challenge his audience intellectually and emotionally. They were not ready to be challenged; to be in a new age of music and go with Beethoven "to take a new road."

Now, we think that first audience was a bit dull in their muttering. And I had to remind myself of this when my immediate reaction to Dejan Lazic's 'joke' was, 'what?!' My first impression of the premier of S.C.H.E.rzo, Op.25, felt like Mardi Gras gone wrong, with individual instruments lost in the throng calling out to each other, 'hey, I'm here,' to try to get in sync. The next day, I reflected on what I heard, and Lazic's daring presentation of "the uniqueness and power of cognition of each instrument's specific and distinctive sound and color," was not unlike what Beethoven was doing 200 years ago, per the commentary by Marianne Williams Tobias,: "Opus 55 was revolutionary, deliberately shocking, enormous and effective. It marked a new era for the composer and for the future of music….music was more than entertainment and could speak, reflect, and demonstrate moral, social, and political values as well," adds Williams Tobias in her notes.

Beethoven took us musically into the Romantic era along with the writers and the visual artists, and for a brief moment with Napoleon as a believer of equality until he dismayed Beethoven by appointing himself 'Emperor'.

So, is Lazic asking me to go beyond the discomfort of 'sound' and feel the call for individual voices to be heard at this very time of social/cultural chaos, and to hear our desire for unity to bind us and rise us up as a peoplehood in pursuit of carrying the banner for the best parts of our humanity?

Indeed he is. Music has this kind of power, to discomfit and urge solutions.

This thought followed me into the presentation of Beethoven's Concerto in C Major for Violin, Piano, and Orchestra, Op.56 ("Triple Concerto"). Begun in 1803, along with Opus 55, once again Beethoven was taking himself, and us, up a new path. "Beethoven's Triple Concerto was unique for its time," reminds Williams Tobias in her program notes. "Audiences were used to single soloists, not multiple, and the composer had to focus on spotlighting individual players as well as using the trio as a unified group."

Paying attention to how Beethoven worked around these challenges is every bit of a wonderment as is thinking about how mechanical inventions come about—lay out the problems, tinker until you find the solutions, present the product, and hope for the best.

The "Triple Concerto" on Jan. 18 took me into that kind of sphere of wonderment. I wasn't alone. I could feel the audience around leaning in with a silent 'wow'. I don't know what everyone else was thinking, but I'm saying to myself, 'man, these three guys upfront are struttin' alongside a big band, groovin' with their licks, unifying in their coolness. Oh yeah, uh-huh, right on…' Indeed Beethoven was spinning out the DNA of jazz in the opening years of the 19th century, some eight decades before the Jazz form as we know it "originated" in New Orleans from the roots of blues and ragtime, and gained homage as "America's classic music."

Check Beethoven's movements comprising Op. 56 and tell me if I'm beyond the rainbow.

Amazingly in sync is not hyperbole in commending the soloists: Benjamin Schmid, violin; Austin Huntington, cello; Dejan Lazic. piano; and the ISO with Krzysztof Urbanski the epitome of a bandleader, handing off parts and herding everyone into the geniality of Beethoven's intent.

What possibly could top that? "The Eroica" as Urbanski envisions it and the ISO players deliver it. Most of us have heard "The Eroica" many times, and we fall easily into its dramatic impact. What was different on Jan. 18? In part, it was the brass section playing 'natural instruments' instead of the now expected valve horns and valve trumpets. Until the development of the modern horn in the early to mid-19th century, Western music employed the natural horn and its natural brass brethren. It was because the players were willing to make the effort to retrain themselves that this was possible. It's a whole new course of study, and it takes dedicated commitment.

I spoke about the use of natural instruments with my son, [ trumpet/flugelhorn player, teacher and composer] and he agreed that to hear the music in its original state of composition is to understand the passion within Beethoven with the call and response of the horns. The instruments with valves have a different timbre--the natural instruments touch our guts differently. The notes are played, but the resonance inside the body is different; even after three days, I feel the effect. It's what I still remember about not only hearing but feeling, the Alpenhorns in Switzerland; once experienced, those echoes stay with you.

Beethoven's Third was meant to touch us viscerally, not just as entertainment, but to make us feel passion and stir our intellect. 'Eroica' - heroic. Nothing was the same after this work premiered. I'm predicting, so it will be with the ISO, after the weekend of Jan. 17-18.

Newly named ISO Concert Master Kevin Lin, was Guest Concertmaster. He assumes his permanent post in the Fall of 2020.

Up next for the ISO at Hilbert Circle Theatre

and the premiere of two new works:Dawning, composed by Huw Watkins, and impromptu composed by Katherine Balch.