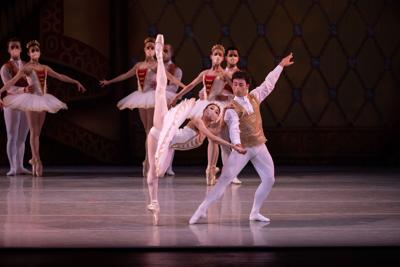 Floating onto the Toby stage within the melodic swoon of Mikhail Glinka’s opening bars of Valse-Fantaisie, the corps of four dancers emulate a garden of rustling pinks. In the blink of an eye, they’re taking flight, then bending into deep sways. Whipped into high speed they’re the harbingers of playfulness conjured by George Balanchine, wearing his heart on his sleeve, so to speak, intent on conveying his idea of his ideal woman. At breakneck speed, the lead couple enters, and despite the male’s not-so-discreet flirtation, Balanchine’s dimensional mind-into-motion sculpting is upended by the mind-of-her-own lady he is pursuing. All this sleight-of-hand, and foot, drama is expertly conveyed despite the masks.

With his wind-swept Valse-Fantasie, Balanchine reigned his broad ballet vocabulary into repeated leaps and leg beats, punctuated with rising on pointe and coming down, and with a smile-inducing diamond-shaped pas de chat step — leaping from one foot to the other and drawing up the feet so the knees are bent, causing the legs to form a diamond.

As quickly as they all appeared, the corps, breaking out with solo fleetness, disappears, followed by the lead couple, leaping off into different directions. Will they one day come full circle and meet up after all? It’s the gifting of a bit of wondering that makes this visualized waltz fantasy delightful.

Alexandra Hughes and Lucas Labrador were the personifications of brio alongside the vigor, vivacity, and verve delivered by Anna Davis, Jacqueline Hodek, Mackenzie Kirk, and Sierra Levin, at the April 17 evening performance.

Victoria Lyras, former Balanchine dancer and IB’s founding artistic director, serves as the Repetiteur on behalf of The George Balanchine Trust. This iteration of Valse-Fantaisie premiered in 1967.

With the premiere of Scherzo Passionato, Kristin Young Toner brings a duality of sensibility from the past year, marked not only by COVID-19 but equally by her transition from dancing as a founding member of Indianapolis Ballet to her new position as ballet master.

Balancing playfulness against a passionate strain, and framed within a pastoral style embodying the concept of peaceful simplicity, the bottom half of the rainbow gains precedence as a way into processing challenge, perhaps awakening to new experiences? Constantly shifting groupings are set within a section of Sergei Rachmaninoff’s Sonata for Cello and Piano, in G Minor, op. 19. Toner’s choreography shows the equality between cello and piano and deep, rich melodies to reveal both classic and contemporary elements.

Clad in body-fitting hues of green, blue, indigo always gaining depths of variance via James Leitner’s lighting palette, the six dancers explore their places within this space. Tentative and daring, weaving in and out, are they representations of a lake transitioning into a new season, exploring rising and falling into a warming sunscape?

Agrippina Vaganova’s Diana and Acteon pas de deux,  set to music by Cesar Pugni, is very loosely based on the much-retold myth. It was first staged in 1935 for the Kirov Ballet in Leningrad. The weak-hearted need not apply to dance this highly athletic/acrobatic work that has the male dancer flinging himself into airborne leaps circling around the stage and landing with delicacy on his knee, arms flung out. As for the female dancer,  dizzying turns and solo balancing on pointe along with flying across the stage with the surety that her partner is there to catch and lift is the ultimate envisioning of daring and virtuosity.

At the April 17, 2021 program at The Toby, Yoshiko Kamikusa and Chris Lingner reprised their roles as Diana and Actaeon, presented at IB’s New Works 2018 program at The District Theatre.

But it’s not just for her fearless choreography that we need to pay attention to Vaganova, who spoke openly of her personal early struggle with deciphering a mash-up of ballet technique. She developed a way of teaching that helped integrate the disparate schools. The Vaganova Academy continues in St. Petersburg, Russia, nearly seven decades after her death in 1957, at age 72.

A sumptuous wedding that showcases why Vaganova devoted her life to preserving Petipa’s choreography. The final act of Raymonda, Marius Petipa’s iconic ballet to the score by Alexander Glazunov,  “is all grace and grandeur as audiences are transported to Raymonda’s lavish wedding to the crusader Jean de Brienne,” enthused Kriscunas in the IB news release. At the live evening  performance on April 17, Jessica Miller and Shea Johnson danced the lead roles of Raymonda and Jean de Brienne.

Usually left out in descriptions of Raymonda is the story of the librettist, 19th-century Russian author and newspaper columnist, Countess Lydia Pashkov. Born in 1845[?], in Russia but writing mostly in French, her published works include novels, plays, and travelogues. Raymonda premiered on Jan. 1898, in St. Petersburg and was also performed in IB's 2018 debut program at The Toby.

The folk-inspired costumes by Loukia Finale and Victoria Lyras match the opulence and splendor of the setting and the music, full of spirited rhythms and lilting waltzes that George Balanchine called ‘some of the finest ballet music we have.

“While Raymonda is set in medieval France, the themes are very familiar,” said Kriscunas. “As the [IB] cast gathers to celebrate together after a period of hardship. The jubilant nature of Raymonda teaches us to embrace good fortune and celebrate life, while always reflecting on that which we’ve lost.”