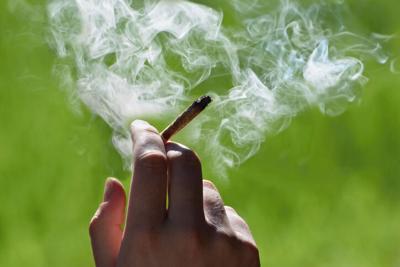 President Barack Obama brewed his own beer in the White House. Franklin Roosevelt stayed up late with Churchill, slugging brandy and smoking cigars. A monkey poured bootleg booze all over Warren Harding’s white suit at a party in the midst of Prohibition. American political history is truly loaded to the gills with stories like these.

Choosing a candidate based on whether or not you’d like to have a beer with him or her is an evergreen populist test for electability. Thus Hammond Mayor and Democratic Senate candidate Tom McDermott’s decision to show himself sharing a joint with supporters in a campaign ad can be understood as just the latest incarnation of a long-standing political tradition in which those who seek our favor do so through their willingness to get high in public.

What makes McDermott’s ad different, even, if harmlessly, transgressive, is that smoking a joint is still illegal in Indiana. This is one case where a “making of” video would be worth watching. The ad was shot in Illinois (where pot, as every Hoosier knows, is legal), “one mile from the Indiana state line.” McDermott, who after four terms as Hammond’s mayor, is making his second try for national office after having lost in his effort to take longtime congressman Pete Visclosky’s seat, is shown lighting a spliff among friends in a backyard setting. All-too-serious conversation ensues about the benefits (manifest now in Illinois and Michigan) legalization will bring to Indiana and the nation.

Since he is a Hoosier — and Hoosiers never go first — it figures McDermott is not the first candidate to light up in a campaign spot. That distinction goes to fellow Democrat Gary Chambers, who is running for a U.S. Senate seat in Louisiana. But Chambers fired up in New Orleans, where pot has been decriminalized and the maximum fine for possession is $100. By going to Illinois, McDermott’s ad underscores the geographical absurdity that our country’s unwillingness to reconcile state and federal standards has foisted on citizens, whose rights across a range of issues are increasingly circumscribed by where they happen to live. Being from Hammond, McDermott knows something about this. He can visit cannabis dispensaries in either Michigan or Illinois in the morning and be home in time for lunch.

Some are bound to call McDermott’s ad a stunt, but that’s not to say that what he’s done is without purpose. Americans have been growing, selling, consuming, and making competing claims about marijuana for generations. Many have had their lives derailed due to an ill-conceived and socially corrupt drug war. If we’re to believe the polling, most of us believe pot should be legal, available, regulated, and taxed. Few of us, though, are willing to stand up publicly and say so. This has meant, among a host of things, a lack of funding for the kind of basic research that could help us better understand what pot does and does not do for us.

It may be a stunt, but Tom McDermott is finally owning an issue that’s been stuck in a cultural twilight zone for far too long. Given the chance, I’d gladly share a joint with him. Even in Indiana.