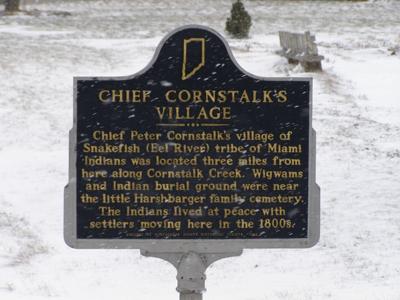 George Ironstrack, assistant director of the Myaamia Center at Miami University of Ohio, will trace the ongoing journey to reclaim the Miami language during the Indiana History Center’s 7 p.m. virtual program on Sept. 1. “Picking Up the Threads of Our Knowledge” is a national initiative by the Miami Tribe of Oklahoma to revitalize Myaamiaataweenki, in concert with Miami University’s Myaamia Center.

A citizen of the Miami Tribe of Oklahoma, Ironstrack centered his degree in Origins and History of the United States from the Department of History at Miami University on the Miami Indian village of Pickawillany, originally located in western Ohio near the city of Piqua, at what now is the convergence of I-75 and US 36, within the Miami River basin. The story surrounding this 18th Century site is intimately entwined with French, British and ultimately with Colonial America and the expansion beyond the original 13 states of the emergent U.S.A.

“Myaamiaataweenki” the Miami language, was once spoken throughout Myaamionki Miami homelands, inclusive of the present states of Ohio, Indiana and Illinois. The language became dormant after a century of the dispersal of the tribe’s population through forced removal and subjugation of children to boarding schools.

In these schools, students were punished for speaking their native language.

Indiana resident and Miami descendant Daryl Baldwin, named a MacArthur Genius Fellow, has spent 25 years trying to reclaim and share the vibrancy of the Miami language.

Attempts to reinvigorate the language have a long history.

Within the pages of “Always A People: Oral Histories of Contemporary Woodland Indians,” is this recollection by Lora Marks Siders, a Miami of Indiana Elder: “We’ve been having classes. Language is where we’re working with others to write it down. J. B. Dunn had written it down on three-by-five cards [starting in 1888]. Now a young man [Don Costa] from Berkley, California, is working on the language. Chief Floyd Leonard of the Miami of Oklahoma and I were at a symposium in Huntington, Indiana, probably back in 1983, and I heard him speak. They say the same words we do, but it’s like the North and the South. You have a different way of saying it…We still use the same words, but it’s a little different accent to it.”

“Dunn fell in love with the speech patterns of Native Americans,” writes Boomhower, “and hit on a point he would make again and again: namely, the language’s intrinsic value as a language [and by extension to its culture].”

Boomhower points to Dunn’s pleas to preserve Native languages. “Dunn believed it would be a disgrace to the entire nation to “let the languages of Pontiac, Tecumseh, Little Turtle, and the rest, perish from the face of the earth; but that is what is rapidly approaching.”

A century later, the deaths of the last of the fluent Miami speakers, and the 1990 passage of the long overdue Native American Languages Act, pushed Daryl Baldwin (Kinwalaniihsia), to undertake learning his ancestral Miami language, as best as he could from what was left of it. With his wife, Karen, and young children, Baldwin began to develop outreach programs with other Miami descendants.

When Don Costa sent a copy of his doctoral dissertation to Baldwin, in 1994, an abiding partnership began and continues.

Through the Tribe's Eewansaapita Summer Educational Experience,  and as the founding director of the Ohio University-based Myaamia Project and Center, Baldwin has been showing how “Language is inextricably linked to cultural identity, and [how] language reclamation is a critical tool in … larger efforts to empower a healthy, sustainable Myaamia community.”

Lauren K. Peightel, Manager of genealogy and cultural programs at the Indiana History Center describes what prompted this particular program, at this time.

“The Sept. 1 program is about how the Miami Tribe is bringing the language back to Miami citizens to learn their own language and identity, and about the rest of us becoming aware of the culture and the work, and supporting it,” she said

She describes attending a November 2016, workshop at Prophetstown State Park “with citizens of the Pokagon Band of Potawatomi and Miami Tribe of Oklahoma. Myself and state park employees were there to learn about better approaches to teach regional and local Native American history to our audiences that more closely aligned with the educational goals of the individual tribes.”

During this multi-day workshop, Peightel and her colleagues heard from Daryl Baldwin and George Ironstrack, along with Diane Hunter (Tribal Historic Preservation Officer of the Miami Tribe of Oklahoma) on the work at the Myaamia Center at Miami University to teach Miami culture and language to their own citizens.

“They’re creating fabulous material, including workbooks that help bring the language into everyday life,” she added. “At one point the group left the lecture room and went into the fields at the park. As a massive thunderstorm rolled into the grassland, George and Daryl walked us through the lunar calendar they produced. While these massive thunder claps loomed and the rain caused a steady rhythm over the park’s longhouse, we learned the Myaamia words for sun and moon, and the days of the week.”

For Peightel and her colleagues the past is not past.

“Some of their hardest work is to get others to understand they are still living, and still here, so we always bring it to the present,” she said. “I was really inspired by the work they are doing with the Myaamia Center and the Tribe as a whole, and left knowing that one day I wanted to bring this story to the Indiana Historical Society,” concluded Peightel, pointing to the underlying thrust: “Neepwaantiinki," the Myaamia word meaning “learning from each other.”