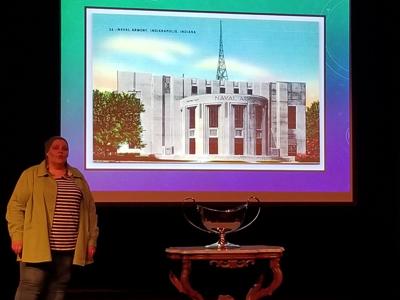 Kim McCann, attired in seafaring garb of an earlier era, speaking with the cadence of a ship’s roll, took us into the intricacies of how and why landlocked Indianapolis came to house the Naval Reserve Armory 85 years ago. She spoke of its continuing legacy as a part of Indianapolis Classical Schools, a free charter school, which was honored with the Cook Cup for innovative renovation.

Marking the tenth anniversary of a unique partnership between Storytelling Arts and Indiana Landmarks, McCann stepped onto the Cook Theatre stage at the Indiana Landmarks Indianapolis headquarters and, via Zoom on Feb. 28, transported us across time and spaces from this former home of the Central Avenue United Methodist Church in the Old Northside Neighborhood to the near downtown site of the recently established Riverside High School.

McCann is the Full-Time Historical Interpreter and Program Developer with Conner Prairie Living History Museum. So it’s no stretch for her to situate us, in our present time, within a journey of a century and a half of events. And it’s equally no stretch, within McCann’s lively sense of humor, to see the connection between tying knots. That is, Landmarks Center is a popular venue for weddings, or tying knots. Nautically, tying knots is everyday work, intimately connected with vessels on water.

Right from the top, McCann’s “A Knot-ical Tale” looped us into historical consequence. We had to stick with her to plumb into the mystery.

“What’s strange about the Naval Armory, is its location,” she said, connecting what we’ve been thinking since any of us first laid eyes on this sleek Art Moderne/Art Deco building rising up on the East Bank of the White River at the cusp of the 30th Street Bridge, with not a lick of water lapping against its shimmering whiteness.

“Works Progress Administration workers built the Indianapolis Naval Armory in 1937-38,” she said. “Indianapolis architects Ben H. Bacon and John P. Parrish designed the Art Moderne-style structure for use as a reserve base for the U.S. Navy, later joined by the Marine Corps.”

You can see nautical features throughout the building, and the names of naval heroes John Paul Jones and David Farragut are carved into the façade. But the Navy decommissioned the building in 2015 and transferred it to the City of Indianapolis.

Currently, it’s the journey of students, not Navy sailors, that the building is enabling. The new Riverside High School, situated within its walls, will eventually hold up to 600 enrollees. This includes students from at-risk and middle-income backgrounds.

Officially renamed Heslar Naval Armory on Dec. 12, 1964, to honor its first, and longest-serving commanding officer, according to the Encyclopedia of Indianapolis citation, what seemed at the time of its ribbon-cutting in 1938 an oxymoron, within three years proved its essentiality in the face of WWII.  Inland, it was the perfect spot for military leaders to gather to plan their Atlantic and Pacific campaigns following the Dec. 7, 1941 U.S. entry into World War II.

McCann’s tale leading up to the building of the Armory as a Works Project Administration program to bring meaningful enterprise to Indianapolis, in the midst of the Great Depression, demonstrates how Hoosiers always have tied themselves to assisting each other in episodes of dire need. McCann was showing us that our current COVID-19 situation resonates with past epidemics that were overcome because “everyone worked together.”

“Moving water collects memory with the memory of those before us,” she said. “Energy draws energy.”

The plan for this piece of land in 1936 — in a time of economic duress — arose from a natural flow of events that, like water, equally has its ebb-tide. It’s of consequence, underscored McCann, that in 1902 Riverside Park was open free of cost to all when it launched in 1902. The major attraction, at that time, was a “Double 8 toboggan.”

McCann sees an analogy in the Double 8.

Double 8 knots are easy to tie, impossible to sever once affixed. And that’s how it is with Hoosiers, said McCann. When we as citizens loop ourselves towards the greater good, it’s a tight hold. When the knotting is not for the greater good, well, there’s some serious re-working to be done.

McCann started us on the Riverside neighborhood story within the flow of the city of Indianapolis forward from the turn of the 20th century. It’s full of twists, and some of its knots are not so durably desirable for the greater good. There’s more to tie into and more to unravel. Respectfully refurbished and repurposed, the original Naval Armory building has much more to reveal.