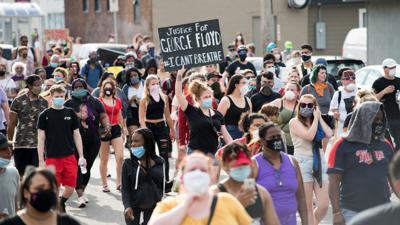 In addition to working as managing editor for NUVO, I'm a research assistant for the IUPUI Arts & Humanities Institute (IAHI). During a recent weekly IAHI Zoom meeting, the research assistants and scholars were talking about the wealth of titles of books and movies on the subject of systemic racism, but aren’t widely known. Then we started brainstorming. We know that many are learning about concepts like white privilege in the wake of George Floyd's death at the hands of Minneapolis police, and want to know more. In the past, IAHI staff have drawn up different types of lists of reading suggestions, or listicles, and published them on the IAHI blog. IAHI director Jason Kelly suggested something similar for publication in NUVO. We decided to send out an invite to IUPUI scholars from a broad range of disciplines to draw up reading lists for the public at large.

Lasana Kazembe, who teaches in the School of Education and in the Africana Studies Program at IUPUI, is the first to offer his book selections on this important topic.

When it was first released in 1977, Wellman’s book broke new ground in its attempt to explain the framework of racism. The author challenges the widely-accepted notion that racism equates to mere prejudice in the minds of individuals. Instead, Wellman’s analysis situates racism as a strategy (fueled by culturally acceptable beliefs and culturally sanctioned practices) used by whites to secure and defend societal advantages. By this regard, Wellman describes racism (white supremacy) as the central organizing principle of U.S. society. I have used this book in my classes and in my Racial Blowback workshops. The second edition was updated and released in 1993. It is a great foundational text.

2. The Fire Next Time - James Baldwin

Late poet, author, playwright, activist Amiri Baraka once remarked that “Jimmy [James Baldwin] practically invented American speech.” I have interpreted this comment as referring to Baldwin’s signature style of direct, bold, and razor-like truth telling. The Fire Next Time contains two essays that the author frames as a letter to his nephew, and a letter from a region in his mind. Both essays offer a searing, unapologetic analysis of the toxic lineage of race/ism in the U.S. Baldwin offers a brilliant and compelling critique of a country that has yet to understand and to reconcile its past. The Fire Next Time was written in 1963 and for this very moment.

3. Medical Apartheid: The Dark History of Medical Experimentation on Black Americans from Colonial Times to the Present - Harriet Washington

Far too few people know about medical history’s racist roots. Washington’s analysis commences in the colonial era, where she documents the exploits of early physicians such as Samuel A. Cartwright and  J. Marion Sims (so-called ‘father of modern gynecology). This is the first comprehensive history of Black Americans as “unwilling and unwitting experimental subjects” at the hands of the White medical establishment. Washington’s book offers a horrifying and true account of the mistreatment that Blacks experienced from the enslavement period to the present. The book is a critical meditation on racism, medical ethics, errant science, and health inequality.

4. The Broken Heart of America: St. Louis and the Violent History of the United States - Walter Johnson

Harvard history professor Walter Johnson’s new (2020) book examines the racial dynamics, politics, and criminality that helped to shape the city of St. Louis. The book is set alongside the contemporary racial protest uprisings that occurred following the 2014 police murder of Michael Brown (Ferguson, MO). Johnson traces the city’s racial lineage to the early 19th century St. Louis and to what the author describes as “serial dispossession and imperial violence.” Johnson suggests that by better understanding the history of St. Louis, we may also better understand the last two centuries of White supremacy, antiBlack racism, and exploitation in the United States.

5.  Slavery by Another Name: The Re-Enslavement of Black Americans from the Civil War to World War II - Douglas A. Blackmon

This book upsets one of Americans’ most durable myths: the belief that U.S. slavery ended with the signing of the Emancipation Proclamation. Blackmon uncovers the grim history of the leasing (i.e., the selling) of African American men to commercial interests between the end of the 19th century and well into the 20th. During this long period, thousands of Black men, often guilty of no crime at all, were arrested, forced to labor without pay, and bought and sold repeatedly at will. As Blackmon documents, the shocking events of that era laid the foundation for the modern prison industrial system which currently incarcerates over 2.2 million African Americans.

Lasana D. Kazembe is an Assistant Professor at Indiana University-Indianapolis (IUPUI) where he teaches in the School of Education (Department of Teacher Education, Curriculum, and Foundations) and in the Africana Studies Program. For the past twenty-two years, Dr. Kazembe has worked as an educational consultant and teaching artist in schools, communities, juvenile detention centers, and prisons. Dr. Kazembe is a published poet, spoken word artist, and scholar of Urban Education, Global Black Arts Movements, and the Black Intellectual Tradition.

The following readings are offered as curricular resources for those who desire to know more about racism and white supremacy.