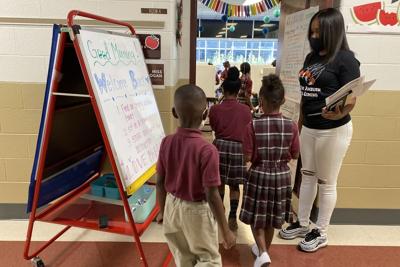 All four of the new and reseated board members have the backing of pro-school choice political action committees.

The addition of Kenneth Allen and Will Pritchard, the return of Diane Arnold and Venita Moore, and the loss of longtime district critic Elizabeth Gore strengthen the pro-charter forces on the board.

The board chose Evan Hawkins, a Marian University administrator and an IPS parent, as its president. Hawkins has been endorsed by Stand for Children, a charter school advocate organization. Moore will serve as the board vice president and Susan Collins will continue as secretary.

In the board campaign, charter advocates far out-raised opponents of charters and of innovation schools, which are operated by charter or non-profit groups. After seven years of policies that favor charter schools, nearly 40% of IPS students attend innovation schools.

Still, the community has debated how much to grow non-district-run schools and how much power to relinquish to outside entities.

Besides looming decisions on innovation school contracts, the new board faces critical issues: keeping students and staff safe during the COVID pandemic, remedying inequity amplified by remote learning, and managing a shrinking budget and declining enrollment in traditional neighborhood schools.

While Indiana’s revenue could remain relatively stable, and budget cuts may not be as bad as once projected, Indianapolis Public Schools will lose $15 million because of a 4% drop in enrollment this year.

The district also must decide when to reopen schools if the coronavirus wanes. Superintendent Aleesia Johnson has said that the decision would depend on data and circumstances.

Allen, the program director at the Indiana Trafficking Victims Assistance Program, raised more than $174,000 in the board race, the most in recent IPS board history. He substantially outspent his opponent, incumbent Gore, who was backed by teacher unions.

The other newcomer, Pritchard, an IPS parent who works for CREA, a company that backs low-income housing, also drew support from charter-friendly political action committees.

Re-elected incumbents Arnold, a retired Hawthorne Community Center executive director, and Moore, a principal at a business consulting firm, have supported innovation schools. They outspent candidates backed by critics of the administration.

More than 70% of the district’s students are Black or Latino and 65% are from low-income families. Unlike most of the districts in Indiana, IPS has educated students virtually this school year except for one month in the fall.

Pritchard, who represents 12 east side schools, raised questions during a Chalkbeat interview about debates over innovation schools and other non-traditional schools. “I’m curious whether those discussions divert attention from important discussions around racial equity and financial decisions, and reducing the achievement gap between white and black kids,” he said.

Last summer, after nationwide protests against ongoing police and other violence against Black people, the board approved a racial equity policy and Black Lives Matter resolution. The new board will be responsible for ensuring the district puts those promises into practice, by increasing the diversity of job candidates, adopting culturally relevant curriculums, and reducing racial disparities in suspensions and expulsions.