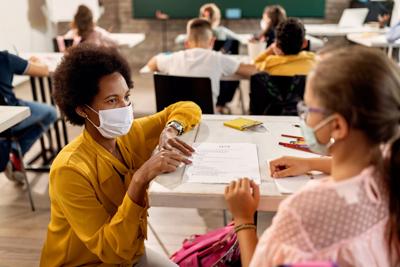 Indianapolis Public Schools will raise its starting teacher pay to about $50,000 next school year, a move its superintendent touts will keep the district in “the top tier” locally for new teachers’ salaries.

First-year teachers will start at $50,400 in 2022-23. The hike is part of a two-year union contract approved Thursday that will give an average 3% raise for teachers this school year and another 3% next year.

The new contract also increases the district’s match for teachers’ 403(b) retirement accounts to 50% of employees’ contributions, up to 6% of their annual salary. For a first-year teacher, that could potentially amount to about $1,500 — far more than the previous $125 annual match.

IPS will have increased its starting salary by 25%, or about $10,000, over five years, fulfilling a promise to boost stagnant teacher wages through a $220 million referendum that voters passed in 2018. The district has also dramatically raised pay for its most experienced teachers by more than 50%, or $30,000, over the same time frame, to $92,600.

IPS is footing the bill for this contract’s raises through increases in state funding: “One way you could think about this is we are passing that increase directly into the hands of our teachers,” said Superintendent Aleesia Johnson.

The pay raises also come on the heels of statewide conversations on teacher pay. As lawmakers search for ways to help increase salaries, they set a bar for starting teacher salaries at $40,000 — a threshold that rural districts in particular are struggling to meet.

Increasing teacher pay is “absolutely the right thing to do,” Johnson said. “We also know that this work continues to be in line with what we’ve heard from our legislators and our state leaders in terms of investments in our teachers.”

But the referendum boon has stirred controversy. Families and other advocates want the district to share those funds with charter schools under IPS’ umbrella, known as innovation schools. More than 10,000 students — 1 out of every 3 students in the district — attend IPS partner schools independently run by charter operators.

Those advocates say the district is causing funding inequity by not splitting its referendum funds, cutting some schools out of the extra dollars that others benefit from.

Without local funding, charter schools are at a disadvantage in competing on teacher salaries. Teachers at innovation schools are not part of IPS’ teachers union and are not covered by the same contract.

At Thursday’s board meeting, two district board members echoed community members’ calls to share referendum funds among the district’s “family of schools.” IPS Board President Evan Hawkins asked the administration to present a plan later this month on how it would divide those dollars.

“I do want to recognize the incredibly passionate requests that this board has received from members of our community, and especially from parents and educators,” Hawkins said, “about the significance of fair and equitable funding — and more specifically the 2018 operating referendum.”