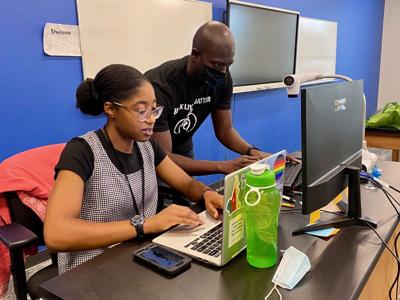 Because they are not in the same room with students, teachers are striving to find new ways to keep their attention in class and push them to do schoolwork.

At 8 a.m. on a recent Friday at KIPP Indy Legacy High School, the teachers are dancing in the empty cafeteria.

The halls of the building are quiet, because the school’s 250 students are logging on virtually. For teachers who will spend most of the day alone, the 45-second dance ritual generates a burst of energy to help fuel them through a long day ahead.

Then, for the next 19 minutes, teachers prepare for the day — reciting school values, discussing lessons, and setting goals. The meetings are also a moment to share what’s going on in their lives outside of school.

“You can’t be your best self at work if you are holding in all of these things,” Principal David Spencer told Chalkbeat. “We have been forced to make these very personal connections.”

Teachers at Legacy are among thousands in the U.S. leading classes over video this fall. Without the daily interactions in classrooms and halls that help them get to know students, they are spending the first weeks of school building relationships. Because they are not in the same room with students, teachers are striving to find new ways to keep their attention in class and push them to do schoolwork.

Educators must do more than muddle through remote learning at Legacy. The stakes are too high to let hardship derail high school even during a pandemic.

But it’s not easy. The coronavirus has upended students’ lives and education.While going to class virtually, they also are looking after younger siblings, working jobs, and dealing with illnesses in their families.

Over the coming months, Chalkbeat will follow how the pandemic is changing life for students, families, and educators at Legacy in Martindale-Brightwood, a predominantly Black neighborhood northeast of downtown. The high school, which currently has students in ninth and 10th grades, began the year entirely online. Leaders are expected to decide in the coming days whether to bring students back in person next month.

In the morning meeting, Spencer flashes a slide of grade-point averages for his teachers. Average GPAs are improving, but they are still low. Ninth graders averaged about 2.1 on a four-point scale, while 10th graders averaged 1.6.

This is what Spencer said keeps him up at night. Those figures are about a point lower than he would expect if students were attending in person. Many KIPP students are eligible for Indiana’s college promise program, which offers free tuition to state schools. In order to receive the funding, however, students must have a 2.5 GPA.

“What happens right now, COVID or not, is going to impact what your junior and senior year look like,” Spencer said later. “So much of high school dictates what the rest of your life looks like.”

The technical problems start just a few minutes into Shelene Baiyee’s first-period chemistry class. Some students aren’t able to type their responses to questions in an online assignment on ions and isotopes. Her internet connection falters, and students struggle to hear her clearly.

“Do you remember what an isotope is?” Baiyee asks a student. As she waits for an answer, she murmurs to herself under her breath “Can you hear me?” before calling on another student whose microphone is already on.

About halfway through her lesson, Baiyee’s audio breaks up so badly that Principal Spencer steps in to bring her his laptop, after he observed the problems while watching her lesson. With the extra laptop, she gets going again with her slides on one computer and her audio on another.

A first-year chemistry teacher less than six months out of college, Baiyee is optimistic and eager to improve. Two days before, Baiyee and a colleague watched videos of each others’ lessons to spot ways they could be better. The other teacher suggested tips for keeping students focused, such as narrating what is happening in the class and cold-calling on students. But it’s hard to practice those strategies if the audio breaks up so badly they cannot hear the lesson.

It’s especially frustrating when internet problems hinder lessons because staff at Legacy have put so much work into making sure students log on. When schools abruptly switched to remote learning in the spring, Legacy relied on recorded videos and homework. But attendance was lower than they wanted, and staff felt like ”the connection that made our school what it was was missing,” Spencer said.

So this fall Legacy changed its approach, and teachers hold live lessons that students are expected to attend for several periods each day. Because virtual classes can be exhausting, the school cut back on the hours students spend in class, Spencer said. Teachers typically lead lessons half the week.

When teachers are not instructing, they help out by taking attendance in colleagues’ classes and calling to track down missing students. At the start of the year, if students missed an entire day, they could get as many as five calls. Sometimes, a call is all it takes to roust a student who overslept. Other times, calls reveal that students are having issues with computers or internet connections the school can help troubleshoot.

“We made a commitment to do whatever it takes,” said Spencer, who believes the unrelenting follow-up during the first month of school has paid off. Legacy is averaging about 94% attendance each day.

With all the internet problems, Baiyee’s class that morning stands out in frustration and obstacles requiring last-minute improvisation, she said.

As a new teacher, “there’s always just so many things to think about,” she said, and technology problems add one more worry to that list.

But Baiyee keeps up her enthusiasm for atoms, ions, and electrons. “If you’re not excited, what makes you think they’re going to be excited?” she asked. “You have to show that you’re as invested in the subject as they should be.”

Down the hall, writing teacher Kara Davis-Myers runs a virtual class with two laptops — her own and one borrowed from an administrator — and an extra monitor. On one screen, she welcomes students as they log on; on another she shares her screen; and on the third she looks at the assignments they are completing in real time.

That day, her students are writing neutral summaries of an opinion piece from the New York Times about whether athletes should kneel during the national anthem.

While students write in Google Classroom, Davis-Myers simultaneously monitors their behavior and reads their work — repeating what the assignment asks for and what they are doing well.

“I love the text evidence that you chose. Explain why you chose it,” she tells one student. “Very strong.”

“Way to go back and edit for paragraphs one through five,” she tells another. “I would say, delete this for now,” she adds, highlighting some text on her screen.

“All right, awesome,” Davis-Myers tells the class, before pausing to caution another student, “if there’s a reason your camera’s not on, I need to know.”

As a teacher, “you have to just be pumped up. You have to be full of energy,” she said. “You just have to give a lot — which is exhausting.”

When Davis-Myers thought about coming back remotely, she was anxious she wouldn’t get to know new students. But in some ways, she’s now managed to feel closer to them.

This year, administrators eased some of the school’s strict rules because of the pandemic and economic hardship. While they decided students must have their cameras on so teachers know whether they are there and can be called on, Spencer said, now students are allowed to wear do-rags and bonnets over their hair.

“We don’t know all of the things that could impact whether or not students could get their hair cut or get their hair done,” Spencer said. “Our students should not feel like, ‘for the next four hours, I have to feel vulnerable in front of everyone because I have to have my camera on.’”

Davis-Myers believes the relaxed rules have helped make students more comfortable. And the requirement that they keep their cameras on has offered a peek into students’ environments.

All that has helped Davis-Myers forge bonds with her new students.

“It’s like they’re more themselves because they’re feeling comfortable in what they’re wearing and who they are,” she said about remote learning. “It’s more natural than I thought it would be.”