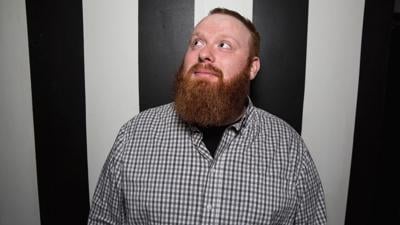 Comedian Brent Terhune hopes you know the MAGA character he plays on the internet is just that. A character.

“The country is so divided — everything is so tense,” he says. “People think with emotions, and I get that. But it’s also like, ‘C’mon man. I’m burning a pair of red high heels.’”

Recently named one of Variety’s 10 comics to watch, the Indy comedian released a new live album titled Welcome to Bluff Creek on Oct. 2. Ahead of his upcoming appearance at Black Circle as part of their weekly (and free) “Sunday Show” comedy showcase, our Seth Johnson caught up with Terhune for a Zoom interview, which you can read or watch in full below.

SETH JOHNSON: Where are you originally from in Indianapolis, and what role did comedy play in your upbringing?

As a kid, I would watch stuff with my brother. He would rent stand-up on VHS, and I would sit there and be like, “This guy is just talking for an hour. This is boring.” He’d get Chris Rock and stuff. Eventually, I would see Chappelle and Chappelle’s Show on Comedy Central, and that’s what really made me think, “Oh, I’d like to do comedy.”

I started stand-up when I was 16, in high school. They would have something called a “coffee house,” so it was essentially an open mic. People would do acoustic guitar and poetry, and that’s where I first started.

JOHNSON: Going forward from age 16, how did you get into doing stand-up more seriously? Where were some of the places you got plugged into in Indy during those earlier days?

TERHUNE: Crackers was my first open mic, when they had the location in Broad Ripple. To me, that was the only place you could do…I didn’t even know there was a comedy club in Indianapolis when I was a kid. I went to Crackers, and then you find out there are all these other independent shows.

JOHNSON: When did you first get involved with Bob & Tom?

TERHUNE: It was my junior year at University of Indianapolis. I went for communication with an emphasis in electronic media. I did radio, and you could take that class every semester if you wanted. So I took that class seven of the eight semesters I was there, and the internship I did was with my friend Jeff Oskay. He was already writing for Bob & Tom, so I knew that was something you could do and I really wanted to do that.

When I was the intern, I was there every day for four months. I would literally write eight hours a day. I was like, “Jeff does this as a job, and I want to do that too.” At the end, Tom was like, “We like your work, and we’d essentially like to have you do what Jeff does.” So I set a goal and I met it, which was really cool.

JOHNSON: Are you still working for Bob & Tom now?

TERHUNE: Yeah. Sunday to Thursday nights I write jokes for them.

JOHNSON: What have you gained from working for Bob & Tom, and how has it shaped you as a stand-up?

There are other writers too. Sometimes, the first joke you think of is what you’re going to think of, what your dad is going to think of, and what your grandma thought of. If you go to the first three jokes, we’ll maybe all think of those jokes, but jokes four, five and six only I will think of. So it really makes you think outside the box. But then, sometimes the first joke is the joke, and there’s no other joke that you need. [laughs] It’s weird. But it definitely makes you ring out a premise. Like, “Let’s see how many jokes we can get out of that.”

JOHNSON: Talk to me about the online MAGA character you’ve created. When did you originally start that, and where did the idea for that stem from?

TERHUNE: When Colin Kaepernick was taking a knee during the national anthem, I saw one of the local stations...or maybe it was a national one...and they had footage from Indianapolis. People were like, “I’ve been a lifelong Colts fan but not anymore.” And the guy was going to burn his tickets in his backyard.

So I did that in my backyard, but it was over the top. I put it out on the internet, and people were like, “This guy is an idiot.” And I was like, “No! This is a joke!” It was never intended to trick anybody, but it just happened to do that.

JOHNSON: You’re so great at that character, but are the misconceptions that come with it ever frustrating?

TERHUNE: There are different levels of intensity in the videos. Sometimes it’s like, “If you watch this and you don’t understand that it’s a joke, then I really can’t help you any more.” [laughs] And then, some videos are so subtle that I’m like, “I get why you would think that.” And that comes with the topic.

If I’m talking about the Looney Tunes having their guns taken away, it’s just an absurd thing to care about. It’s really just disheartening when people can watch the whole video, quote it back and still not understand. You’d like to think at least they can pick up on certain jokes, but that’s not always the case.

JOHNSON: You’ve been getting some national attention in recent years, which has been awesome to watch. That said, how has Indianapolis been a good jumping-off point for you?

TERHUNE: Indy is supportive. We have a great comedy scene here in the city, and we’ve always had at least two comedy clubs, if not three or sometimes four. On top of the local scene, there are places like the White Rabbit who do independent stuff. And at the White Rabbit, stand-up is the most tame thing they do. [laughs] So it really makes you grow as an artist, and I don’t do as much there as I wish I could.

Indianapolis has just been a great place to practice and fail. [laughs] Everybody has always been so supportive. And then, it’s just an hour or two drive away from so many cities. You meet people, and then you trade shows or network. But Indy has been a great place to do stand-up, and that’s part of the reason I’m still here probably.

JOHNSON: Talk to me about the most recent live album you released, Welcome to Bluff Creek. I know you recorded it in Bloomington, but where did you record it there?

JOHNSON: I know you also did a live stream to celebrate the album’s release. How did that go?

TERHUNE: It was great. I mean, it was literally right here where I’m standing. It’s weird to do a show in your house, not having to leave. Now, comedy has changed so much. Either you’re doing shows outdoors or with limited capacity.

I had Ryan Niemiller from America’s Got Talent and a guy named Jonny Loquasto [open up]. We all three co-host a podcast, so it was cool to have those guys on. I did some pre-recorded sketches. I did a recap of 2020 as the character. I roasted me as the character. And then, I did a character that I’ve done for a long time named Coney Danza, and he does hot dog puns. It’s five minutes, but at the beginning, I’m like, “This is what the character is so enjoy it because it’s food-based puns.” And then, I did regular stand-up too.

So it was kind of a variety show that I hosted, but it was a lot of fun. And it was just weird to talk to somebody in Australia. There were people literally from all over the world that tuned in, and it was really cool.

JOHNSON: Talk to me about your podcast, for people who don’t know about it.

TERHUNE: I do two of them. The one that I just mentioned is called The Cafeteria. It’s with Ryan Niemiller and Jonny Loquasto. We do that weekly, and that’s usually a half hour to an hour. We all three will bring a topic to the show. Most recently, we did, “What are your favorite Halloween memories?” Ryan’s was that a plane crashed while he was trick-or-treating. It’s not a favorite Halloween memory. But it’s like, “When does that ever happen?” It [the podcast] is much funnier than the plane crash. [laughs]

And then, I do another one called the Field Trip, which is pop culture-based. Recently, I’ve done “The Toy Hall of Fame” and “Parody Religions.” That one is just me, and I have a rotating cast of hosts.