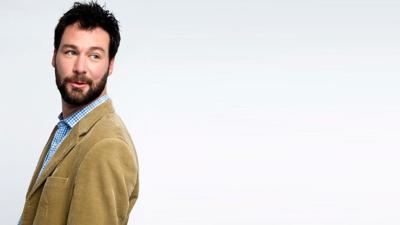 Comedian Jon Dore is not a fan of doing stand-up comedy shows over Zoom.

“I hate them,” says the Ottawa native. “It’s better than not doing them, although I don’t think I totally agree with that either. You need to be live in front of people.”

From April 8-10, Dore will indeed be live in front of people when he comes to Helium Comedy Club in Indy for a run of five shows across three nights. Ahead of his visit to town, our Seth Johnson caught up with Dore for a quick phone interview, discussing his latest CBC Television show Humour Resources and much more. Read their conversation below.

SETH JOHNSON: What was your 2020 slated to look like, and how did the pandemic alter your plans for the past year?

JON DORE: It was looking kind of interesting. I had a couple of festival bookings up in Canada that I was very much looking forward to, along with some TV tapings. I had some interesting shows booked, and then the rug got pulled out from underneath me, as it did with everyone. My last show was March 5 or 6 in North Carolina, and it got pretty quiet after that.

JOHNSON: Once you became accustomed to life in the pandemic, were you still able to feel productive?

DORE: When it came to stand-up, no I was not productive. It was tough to do anything. I don’t like these Zoom shows at all. I don’t enjoy performing through a computer screen to a bunch of people watching through whatever device they’re using.

I got lucky because we had pitched a television show that we made with the CBC in Canada called Humour Resources where I interviewed comedians. That was challenging, fun and extremely satisfying once we finished making it. So as horrible as the pandemic has been, I was able to make something interesting out of the horrible situation.

JOHNSON: Where did the initial idea for Humour Resources come from, and at what point in the timeline of last year did you come up with it?

DORE: The idea is about a year-and-a-half old. It existed pre-pandemic in that it existed in a digital short format. We originally pitched it as a foolish idiot like me who thinks he can become the HR manager for stand-up comedians. So that’s where it started.

Then, when the pandemic hit and networks were looking for safe ways of making broadcast material, [they asked] if we could turn the short-form show into a longer show. So then we surrounded the interviews with a storyline, which is my own personal life where I’m living with my girlfriend and her 7-year-old daughter in Alaska and dealing with the struggles that go along with working from home and balancing time management. So the idiot version of me in that show preaches the importance of these things to the comedians I interview. And then, in my everyday life, I fail miserably at them.

JOHNSON: I was looking through some of the comedians you had on Humour Resources, and it’s quite a fun list. Do any of the guests stick out as being particularly memorable or personal favorites?

DORE: To be honest with you, they were all favorites. That’s such a lame answer, but they were all friends of mine and people who I knew would be perfect. I thought we got a wonderful, diverse group of people who could offer a unique perspective of comedy. We got the crazy Eric Andre and his wacky antics. We got Reggie Watts, where it was like, “Does he fit into the box of HR at all?” We knew Sarah Silverman would deliver really funny, sarcastic responses and ironic statements. Then, a lot of the Canadian performers, like Deb DiGiovanni and Arthur Simeon, were so funny and played the game really well. Ronny Cheng was also great. He pushed back and gave us a hard time, which was funny.

JOHNSON: When did you start getting back on the road for stand-up? (Note: This phone call took place on March 26.)

DORE: I haven’t yet. I do Minneapolis at the end of March/first two days of April, and then I do Indianapolis the following week.

JOHNSON: Have there been any open mics in your area where you’ve been able to try out jokes? Or will you be coming into these first stand-up shows with fresh jokes that you’ve never tried out in front of anyone before?

DORE: A mix of both. I was lucky enough to tape a TV show in Toronto in September where I was the host of several shows. I had to go quarantine in Toronto for two weeks. And then when I came out of quarantine, I had been writing with a friend of mine, where we shared joke ideas back and forth. So those jokes are relatively new.

A lot of these jokes will also be me figuring it out, but I’m someone who loves to figure out a joke on stage anyway. So I’m very much looking forward to just going up with basic ideas and trying to get the audience on my side.

JOHNSON: I saw that you made an appearance on Conan during the quarantine, and I know you’ve appeared on his show several other times in the past. That being said, do you have any sort of personal relationship with Conan O’Brien?

DORE: No, I don’t know Conan personally other than being on the show and saying hello. I know that his booker, J.P., enjoys my comedy and always asks if I have something new to present. So I don’t know Conan personally, but I just think he’s a good fit for me, especially the kind of comedy I was doing at the time [when I first appeared on his show in 2010]. I don’t think there would’ve been a lot of places that would’ve allowed me to do certain things that I do, but Conan definitely did.

More recently, J.P. is doing this show where he looks back at old stand-up comedy sets from Conan. So last week, Rory Scovel and myself were interviewed by J.P. where we talked about the origins of one of the performances we did on Conan, which was a lot of fun.