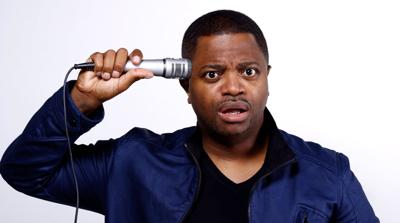 As a touring comedian, Benji Brown was forced to make some major life adjustments when the coronavirus pandemic made its way to the U.S.

“When you’re accustomed to living out of suitcases in hotels, sitting and being in one place for quite some time was just mind-blowing,” Brown says. “It went from happy-go-lucky, go where you want to self-preservation. I went from worrying about, 'what’s gonna be my first joke?' to ‘where’s the hand sanitizer?’"

Brown is set to headline Indy’s Helium Comedy Club from Aug. 14-16, with a total of five shows across three nights. Ahead of his visit, Brown caught up with our Seth Johnson for a phone interview, discussing his return to the stage and much more.

SETH JOHNSON: How was your quarantine? What was it like not being able to do a lot of what you normally do in terms of touring?

BENJI BROWN: It’s been an adjustment. Things in the world were rolling around the time that things began to shut down. I was really rolling with the Martin Lawrence LIT AF Tour we were on. It was produced by AEG, so we were doing NBA-sized arenas all around the country. We were just hitting our groove, and then things came to a screeching halt in mid-March.

You were just home, so you’re trying to think of ways to be creative, transitioning from live entertainment to social media. I didn’t think it would last that long — it was just such an unknown. So it’s been a challenge, but I finally got back into the groove late May/early June.

Going back on the road, it was just like, “What’s it going to be like?” They said these venues aren’t going to allow capacities to be at 100%, and they’ll have to abide by guidelines. These were things you never had to worry about before. Even in hotels, there’s no such thing as room service anymore. [laughs] At least not right now.

So things are different, but it’s been a joy. Just as much as I’ve been yearning to perform for the people, these crowds have been coming out because they too have grown weary from being indoors and not being able to do what they normally would’ve liked to do.

JOHNSON: You mentioned pivoting to other comedy endeavors while you were in quarantine and unable to perform. Were there any specific virtual mediums you found you particularly enjoyed over others?

BROWN: I’ve always been a person who digs into my inner world of characters, even before COVID-19. Now that there was so much idle time, I had an opportunity to produce all these comedy sketches in volume because there was nothing deterring me. I used to be like, “I’ll do one video a week because my travel schedule is crazy.” But now, I’m pumping out a video a day.

Since everyone else had also come to a screeching halt at the time, there was a surplus of invitations to interview on my peers’ platforms. It was always a question of, “How quickly can you get on a flight and come to our studios to do an interview in person?” But now, you can book interviews morning, noon and night [via Zoom]. So it’s made it where it’s like, “Wow. This may be the new way of doing things.”

JOHNSON: You mentioned how excited audiences are to get back out and enjoy live entertainment. With that in mind, what emotions have you felt during this return to touring?

BROWN: Aside from sellout bonuses, everything is modified. Temperatures are being checked upon entry. There are hand-sanitizing stations. I’ve never been to a comedy club where there are stickers on the floor for social distancing. The comedy club ambiance is the lights are dim, and there are portraits of all the comedy greats on the walls. Now, instead of looking for the portraits, everyone is looking for the hand sanitizer. [laughs] But they do a great job. I will commend these venues for adhering to these guidelines.

It’s like they’ve got it down to a science, where people can still come out, have a great time and feel safe in the process. They’re providing multiple microphones to each comedian. It’s been so comforting to witness.

JOHNSON: Who are some comics you originally looked up to when you first started doing stand-up?

BROWN: It was a joy growing up. When my aunts and uncles would babysit me, they’d promise me, “If you’re good and don’t make loud noises at night, then I won’t tell your mom that I allowed you to listen to this Richard Pryor album.” The greats growing up were Eddie Murphy, Martin Lawrence, Steve Martin, Chevy Chase, the Belushi brothers … And then when it came to characters, there was Laurel and Hardy and Flip Wilson. I think these people paved the way for live stand-up, character creation and talking about real life experiences.

I wanted to borrow the animation of Martin Lawrence, and the characters and changing voices of Eddie Murphy. I studied these comedy icons so much that I sometimes feel myself being like, “Wow. I think I channeled Eddie there.” Or, “Martin Lawrence probably would’ve said that.” I just try to incorporate different things that I admire, and it’s still working. [laughs]

JOHNSON: You mention character development, which is something you are so good at. How do you go about creating voices for the characters you conceive for your stand-up? And once you’ve come up with the voices, is it something you have to practice prior to a performance?

BROWN: Half the time, it’s just natural. I just go with my gut feeling and improv it a little bit. And half the time, I do get my rehearsal in, practicing the different characters' voices.

Growing up in the ’80s, there was no social media. So on days off from school, a good friend and I would get the phone book and would be on the phone all day long. We played a game, and I didn’t realize I was developing characters. [laughs] We’d get the phonebook, randomly flip the pages, and whatever you landed on you called and did a prank phone call.

Even though they didn’t know me, I was like, “I can’t use my regular voice.” So I’d always change my voice and would either act like an elderly woman trying to sell recipes or a little child who has milk but no cereal. [laughs] My friend and I would take turns, but sometimes he’d say, “Benji, no. How about you do another one?” I later asked him on the playground, “Why do I have to do it all the time?” And he said, “Because you know how to do these voices!” So it started in the third grade but is still prevalent in my profession today.

JOHNSON: In the bio on your website, there’s a quote from Mike Epps, who happens to be from Indianapolis. What kind of relationship do you have with Mike? Are you two friends?

BROWN: Yes, we are good friends. We go back to ’97 maybe. Before his big break, he and I would take road trips and would go to Tampa, Florida, or promoters would book us on weekends in Orlando or Miami. So I spent three or four hours in the car with Mike almost every Friday. He would speak it into existence. Like, “When I get my first break, the first thing I’m going to buy is this, this and that.” We would just dream out loud — it made the trips faster.

I remember the first time we bonded. We’d stay at very humble hotels, so the walls were thin. I found myself singing a song. And when I was done with the first verse, Mike started singing the chorus through the wall. [laughs] He says, “What are you doing?” And I say, “I’m cutting my hair.” And he says, “I didn’t know you could cut hair. When you’re done, can you come over here and cut mine?” So I go over and cut his hair, and all of a sudden we’re singing a duet in his room. From that point on, we hit it off.

I recall being in New York. I was stunned and happy because he said, “Benji, I got the part. I’m going to be in Next Friday.” I said, “You’ve gotta be kidding me! That’s great!” It was the most out-of-body experience to go to the movies and see him. It just brought back so many times when we’d been in a car, and I was like, “We’ve talked about this moment.”