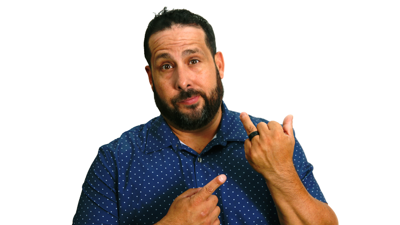 Since getting back on the road post COVID-19 shutdown, comedian Steve Treviño has been pleasantly surprised by the crowds that greet him.

“The audiences are so happy to be there — they’re laughing harder,” Treviño says. “They’re enjoying themselves more. We don’t appreciate things unless they’re taken away. Our freedoms were taken away. But now that we’re back, we go, “Hey. Our lives are pretty darn good, and we need to enjoy them.’”

Treviño is set to headline Indy’s Helium Comedy Club from June 3-5, with five shows across three nights. Ahead of his performances, our Seth Johnson caught up with the Texas native for a phone interview, which you can read below.

SETH JOHNSON: I’ve been leading off a lot of my comedian interviews with this question, so we’ll start here. What was your 2020 looking like prior to the pandemic happening?

If I go to theaters, it’s out of necessity. It’s also because I’d rather be away from home Friday and Saturday instead of Thursday, Friday, and Saturday. So I’m bummed because I’m a family man. I love being with my family — my son and my daughter. So that’s the main reason I’m bummed. I was on the way to only having to be away Friday and Saturday. But now, I’m back on the road Thursday, Friday, Saturday, and sometimes Sunday. That’s been the rough part for me. It’s like, “Man, I want to be home with my family, but I also want to be a comedian.”

JOHNSON: What were some things you did during the downtime to still stay productive during the COVID-19 shutdown?

TREVIÑO: I’m a glass-half-full guy. I’ve been told no my entire career, and I’ve had to figure things out on my own over and over again. This was no different.

One thing I learned was how to make money online. I learned to create a podcast with my wife and really adjust my social media game so that I could make money on social media. So in a sense, it taught me a lesson and made me better. None of us have a time machine to go back in time and change things, but I did the best that I could and ultimately it made me a better comedian.

JOHNSON: I read that you had a child during the pandemic. Can you tell me more about that situation and what it was like?

TREVIÑO: Going back to me being somebody who always sees things in a positive light…one of the positive things that came out of the coronavirus is that my wife was able to get pregnant, and now we have a six-month-old daughter.

I talk about it in My Life in Quarantine, which is on Amazon Prime. In 2019, we had a miscarriage. Life could not have been better for myself and my wife, but then all of a sudden we had this miscarriage. We spent 2019 trying to get pregnant and really stressing our relationship out because we couldn’t get pregnant. Then, I found myself unemployed due to the pandemic, but my wife got pregnant. So yes, I was unemployed for six months. But guess what? Now, we have this beautiful daughter.

JOHNSON: What was it like putting together your latest special, My Life in Quarantine? Were there challenges that came along the way during the process of making it?

TREVIÑO: Generally, as time goes on, we tend to forget, whether it’s the loss of a loved one, an event, or being sick. But when you’re in it, you go, “Oh my gosh. I’m never going to forget this.” For me, the pandemic was one of those things. It was like, “I can write all this funny stuff about the pandemic and what it means to me, but it has to go out now.”

So as soon as Texas opened up and we were allowed to have a socially distanced, masked crowd, that’s what we did. It was an opportunity that was like, “Hey. This isn’t my normal stand-up special. But here’s a little stand-up, and here’s a little bit of me doing the podcast.” It was also an opportunity to talk about the miscarriage, which I really wanted to talk about because I realized that nobody talks about it. I’m pretty sure it’s a subject no comedian has ever covered.

JOHNSON: How did your podcast, Steve Treviño & Captain Evil, come about?

TREVIÑO: The podcast came out of necessity. Even though I’m a positive guy, I gotta admit…sitting there unemployed, watching the news every single minute of every single day, I got overtaken with depression. I had never understood or had depression. I’d never thought that depression could happen to me. But here I found myself not wanting to get off the couch —and then becoming a horrible husband and a horrible father.

My wife walked into the room and said, “Hey. You need to cut this shit out because you have kids and a wife, and ultimately, it’s happening to everybody. It’s not just happening to you. Let’s do something.” I go, “Okay, what?” And she goes, “Let’s go live every Wednesday.” It gave me something to look forward to, and it was human interaction with other people. From going live on Facebook, it evolved into a podcast.

I had never really wanted to do a podcast. I had tried doing a podcast years ago. I probably put out 12 episodes and lost interest. But during the pandemic, while having these conversations with my wife, I’ve really come to enjoy it. So we’re going to continue the podcast. We’re doing well. We have people that watch weekly, and we have sponsors. It turned out to be a really cool experience for my wife and me.

JOHNSON: What specifically do you enjoy the most about doing it?

It’s almost like therapy, and when my wife and I don’t do the podcast we miss it. It’s nice to sit down with your wife and talk for an hour about our weeks, what we went through, our opinions, and our disagreements. It really turns out to be a very therapeutic conversation for us, and we’re getting to the point where fans come up to us and say, “Hey. We watch your podcast, and we have the same arguments. Because you’re having the argument, we’re revisiting the argument, coming to a conclusion, and we really appreciate it.”

JOHNSON: Does Indianapolis hold any special significance to you?

TREVIÑO: It’s funny you say that because I met my road manager in Indiana 20 years ago doing stand-up. He was a rugby player, and we would always go to Connor’s Pub in Broad Ripple. Timmy still works for me, so we’re very excited to be coming back to Indianapolis and hopefully walking into Connor’s Pub.