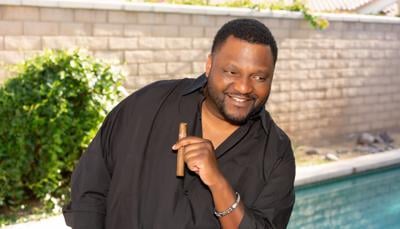 Comedian Aries Spears particularly enjoys the independence that comes with hosting your own podcast.

“It’s totally freedom of speech,” says Spears, who co-hosts a podcast with Adam Steinberg called the Spears and Steinberg Podcast. “Because of this cancel culture we live in — this area of moisture and sensitivity — that seems to be a forbidden thing.  We’re kind of like alcohol in the prohibition era. We know people want to drink deep down inside so we give ‘em what they want.”

From Sept. 11-13, the former MADtv star will headline six shows across three nights at Indy’s Helium Comedy Club. Ahead of his visit, our Seth Johnson caught up with Spears for a phone interview, discussing the state of stand-up amidst the COVID-19 pandemic and much more.

SETH JOHNSON: Prior to the shutdown, what were you up to, and how did coronavirus impact that?

ARIES SPEARS: Prior to everything being shut down, it was normal and business as usual. And then of course, once that happened, you didn’t work for three months, which was difficult. Since coming back, it’s working, but with limited capacities, distancing and face coverings. It’s just all surreal.

JOHNSON: How have the safety protocols affected the energy at shows?

JOHNSON: How was your productivity level throughout the shutdown?

SPEARS: For me, being productive comes more naturally when I’m on the road, as I’m secluded. I have time to think and don’t have a lot of distractions. Being home has been cool. But even in times when you think to yourself, “I need a break, and I need to get off this grind,” once you stop working you appreciate working.

JOHNSON: You spent many years on MADtv. Did you find yourself taking anything from the show and applying it to your stand-up performances? Can you tell me how one maybe affected the other?

SPEARS: In all honesty, it doesn’t because one is a team sport, and the other one’s a solo gig. When you do an ensemble cast show, it’s almost like playing with a teammate. You gotta learn their comedic sensibilities, where they like the ball, how they like to move, and then you’ve gotta do a lot of listening and paying attention. When you do that and can become a cohesive unit, that really makes for a great show.

Whereas, with stand-up, you’re up there by yourself, all alone. So everything lives and dies on your shoulders.

JOHNSON: Growing up in New York, where were some places where you cut your teeth and learned the craft of comedy?

SPEARS: By the time I started stand-up, I was in Jersey, but there was a little bit of going back and forth between places in East Orange, New Jersey, Queens, Long Island…kind of just that tri-state area.

JOHNSON: Were there any people in the area who took you under their wing, or that you l looked up to in terms of navigating the comedy world?

SPEARS: Not really. One of the main guys I came up with in New Jersey that actually became a success story was Bill Bellamy. Everybody else kind of got left behind. And I didn’t get to hang out with the fellas like that because when I started I was 14 years old. So from 14 to 17, which is when I made the move to L.A., I couldn’t do a lot of the things that those guys could do because they were all adults and I wasn’t.

JOHNSON: Outside of stand-up, is there anything else you’ve been working on as of late?

SPEARS: I’ve got my podcast I do called Spears and Steinberg, which is teetering on our third year. I’m trying to promote that as much as I can to get the word out there.