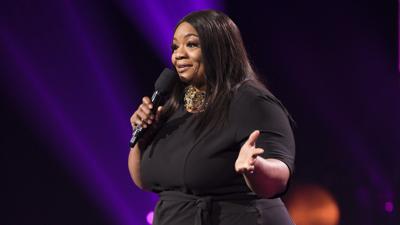 Ms. Pat has appeared on podcasts with the likes of Joe Rogan and Marc Maron, she’s published her own autobiography, and now, the locally based comic is set to star in her own sitcom.

“It’s all about my move to Plainfield, Indiana,” says the Atlanta native of her TV show. “When a white lady baked me a cake, that really scared the hell out of me. I’m from the inner city, and there’s a rule in the inner city. They said, ‘You don’t eat other women’s cookies. They’re trying to get your man.’”

Scenes like the one described above from Ms. Pat’s life will be portrayed in her show, aptly titled The Ms. Pat Show, premiering via BET Plus on Aug. 12. Fittingly, Pat will come back home for a run of stand-up shows less than one month before the sitcom’s debut, performing at Indy’s Helium Comedy Club from July 15-17.

Ahead of her triumphant return to Indianapolis, our Seth Johnson caught up with Pat, discussing her upcoming television show, a recent interaction she had with Lil Nas X and much more. Read their conversation below.

SETH JOHNSON: I interview a lot of comedians, and I’ve been asking them all this same question — what impact did the pandemic have on your original plans for 2020?

MS. PAT: The pandemic didn’t mess up much for me — it didn’t slow me down much. It did mess up a few trips. I was going to go to Hawaii and Australia. As a little Black girl from the ghetto, I was looking forward to going to Australia. [laughs] But I got bored at the house, and I was able to remodel my whole basement. One day, I just picked up a paintbrush and said, “Hey. It looks like we’re going to be in the house for a while.”

Next thing I knew, my TV show came through, and it was time to start writing. So I stayed busy the whole time. What hurt me the most is I gained a few pounds I didn’t need, but I guess we all did. [laughs]

JOHNSON: Aside from your TV show, what else did you stay busy with comedy-wise? Were you still doing your podcast (The Patdown with Ms. Pat) during the pandemic too?

JOHNSON: When did you start getting back on the road to perform, and what was that experience like?

PAT: I went back out in April of this year on my birthday. I was surprised to see people coming out. It wasn’t slow, but I was very rusty. I had been off stage, like most comedians. But the fans were just so happy to be there. Some of them would throw out your material to you, and they would just clap until you remembered. It took me about three weeks to get back into the groove, and then I was on my way.

JOHNSON: Take me back to when you first moved to Indiana from Atlanta. What was that adjustment like, and what helped you feel more at home here?

PAT: It was hard initially. I live in Plainfield. It was like I was dropped out of the sky into this small, white town. When I arrived, there was just corn everywhere. I’m from Atlanta, so I had never seen corn. I remember telling a relative, “Why don’t these people cut their grass?” This white man pulled over, turned pink in the face and laughed so hard. It took him 15 minutes to tell me it was corn. [laughs] I was like, “It’s corn? Why do y’all have so much corn?”

So it was hard getting adjusted. I left friends and some family behind. I didn’t have any friends. I couldn’t just run over to somebody’s house, sit down and talk, so I was kind of lonely. And then, I thought I had a comedy career because I had just done a show with Roseanne Barr called “World’s Funniest Mom.” But then, I got dropped in the middle of Indianapolis, and I didn’t have a home club. So it was a little rough for me, but I have to say I think it was one of the best moves in my comedy career.

JOHNSON: Can you elaborate further on that? In what ways did moving here help your comedy career? What people and places were crucial in helping that growth to happen?

PAT: I ended up going to a club by the name of Morty’s, and that became my home. I was able to take a step back and look at my material, and I started to develop it in a way that would make me unique. So that really helped my comedy career — by really putting my set together there at that club.

JOHNSON: We briefly touched on your podcast, The Putdown with Ms. Pat, earlier. What initially inspired you to start that?

PAT: I started doing my podcast when they first started to get hot. I got on with Ari Shaffir, Tom Segura and eventually that landed me at Rogan. I’ve been on Rogan two or three times, and in having a conversation with him, he was like, “You really need to start a podcast.” I realized I liked to talk, and I went and started one. I was like, “What took me so long?” So it was Joe Rogan who really pushed me and texted me, saying, “You really need to start this podcast.” That’s how it got started.

I grabbed my comedian friend Dean Curry and Chris Spangle, who works for Bob & Tom. I thought, “We represent three different types of people in the world.” We all came together, and we have some unique, crazy conversations.

JOHNSON: Speaking of your podcast, I listened to a recent episode where you talked about attending the BET Awards for the first time this year. Can you tell me more about what that experience was like?

PAT: That was my first red carpet. I’ve been telling people, the only red carpet I was used to was with Delta. They lay out the red carpet because I’m a Diamond member, and I thought that was something special. [laughs] But the BET Awards were breathtaking. I saw Lil Nas X in person. He was gorgeous. I remember telling him, “Wow man. You got on a dress, and you’re going to shut all of us women down. You make us look bad.” [laughs] But I had to forgive myself. I’ve had four kids, so I deserve to be a little chunky.

I was a little blown away. I was like, “Wow. I’m at the BET Awards.” There was a red carpet. It was hot. I was a little worried about my wig slipping off my head, but it was really fun, I gotta say.

JOHNSON: Your debut television series, The Ms. Pat Show, is premiering on BET Plus in August. How did the show’s concept first come about?

PAT: I did a podcast with Marc Maron, where I was sharing my story. A guy who worked for Ron Howard’s company, Imagine, heard me. He called me in, along with a couple other people, and he wanted to offer me a TV show. We sold the project to FOX, and then it went over to FOX’s streaming side and Hulu shot the pilot. After Hulu shot the pilot, they went back and forth and decided it wasn’t for their platform. But BET Plus stepped in and picked it up, and we taped 10 episodes.

So this has been a four-and-a-half year journey, but we’re finally here. It premieres August 12. I always tease people and say, “This show is a hoe because it’s been passed around so many times in Hollywood.” [laughs] But finally, we’ve found a home at BET Plus, and we really appreciate somebody who understands.

JOHNSON: Coming from stand-up, were there adjustments that came with acting in a show? Did acting come naturally to you?

PAT: Nah, it didn’t come naturally. [laughs] FOX put me in acting class. What’s crazy was…when we pitched the show to FOX and they bought it, they were like, “Great, we’re going to make you a sitcom!” And I was like, “Excuse me. Are you people going to ask me if I can act?” They all looked at me and were like, “You can’t act?” And I was like, “I can act a fool, but I can’t act on TV.” [laughs]

They immediately got me acting classes, which was a challenge because I had to find somebody that I really connected with in Tasha Smith. She really helped me out. I worked with her for over a year. She got me together, and I’m still learning each and every day. The creators, directors and producers [of The Ms. Pat Show] all made sure to put really strong actors and actresses around me so I didn’t seem like the weakest one — I look like I know what I’m doing. It turned out pretty good I think.

JOHNSON: What did you enjoy most about putting this first season of The Ms. Pat Show together?

PAT: I enjoyed watching the material that I created over the last 15 years get turned into dialog in people’s mouths. There were times when we were writing material, and people were like, “Is it okay if we put your joke in this person’s mouth?” I was like, “Yeah!” 90% of that stuff was my material, or it was something that happened to me. I never wrote that for it to become a sitcom — I just wrote it to perform on stage. I sit back sometimes when I look at that pilot, and I’m like, “Wow. I wrote that joke 15 years ago, and here it is in a TV show.”

JOHNSON: Your upcoming string of shows will be at Helium Comedy Club in Indy. What are you looking forward to with this hometown run of performances?

PAT: Indy is my second home — I’ve been there about 15 or 16 years. I’m just hoping everybody comes out and watches me do this hour because I’m getting ready to turn this hour into something special in a few months.

I’m just happy to be back home. I went from doing the TV show to working out this material. So I’m happy to sleep in my own bed for a week, and hopefully people will come out and enjoy the real stories I’m telling about my life.