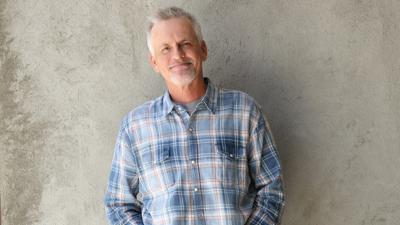 If you’ve watched a cartoon show in the last four decades, there’s a good chance you’ve heard the voice of Rob Paulsen.

Since getting his first big break in the early ‘80s, Paulsen has been the voice behind some of television’s most iconic cartoon characters, including Pinky from Pinky and the Brain, Raphael from Teenage Mutant Ninja Turtles and Carl Wheezer from Jimmy Neutron: Boy Genius, just to name a few. With more than 250 roles now under his belt, Paulsen is still staying active today despite a recent battle with throat cancer, most notably voicing both Pinky and Yakko in the newly rebooted Animaniacs series.

As PopCon Indy returns to the Indiana Convention Center from July 9-11, marking the facility’s first public event in 2021, Paulsen will make his way to Indianapolis to greet fans, along with a star-studded lineup of pop culture icons that also includes Emily Swallow from Supernatural and The Mandalorian, Jim O’Heir from Parks and Recreation, Kate Flannery and David Koechner from The Office and many more.

Ahead of Paulsen’s visit to Indianapolis, our Seth Johnson caught up with him for an interview, looking back on his evolution from a young inexperienced on-screen actor in L.A. to the prolific voice actor he is today. Read their full conversation below.

SETH JOHNSON: Growing up, what cartoons were you into, and were there any voice actors from those cartoons that you looked up to?

ROB PAULSEN: Mel Blanc, obviously. It’s pretty difficult to even imagine a segment of popular culture without Mel Blanc. June Foray, who became a dear friend out here. So Looney Tunes and Rocky and Bullwinkle. A couple of primetime shows when I was a kid were very influential: The Flintstones (of course) and Jonny Quest. I loved Jonny Quest.

So all the folks that I’ve mentioned, in addition to Edward Everett Horton, Jay Ward and Bill Scott, Paul Frees. It’s just great stuff, and it’s utterly timeless. Bugs is 80 now. You can virtually watch any of the shows from the ‘50s, ‘60s and on, and they’re all just fantastic. Of course, that includes Chuck Jones, Friz Freleng, Tex Avery, Bob Clampett and all these wonderful directors and incredible music — all of which kind of came together for Animaniacs. That, to me, was one of the finest homages to the golden age of Warner Bros. animation. You had Mr. Spielberg involved with a giant orchestra. I got to sing songs that have arguably become iconic. It just doesn’t get any better.

JOHNSON: Can you give me some more backstory on the moment you realized voice acting would be a viable option for you to pursue as a career?

PAULSEN: I’m a perfect example of the axiom that luck is when opportunity meets preparation. I drove out here [to L.A.] from Michigan a zillion years ago, so I put myself in a position like millions of other performers to get lucky. In my case, I was becoming a better actor that was more adept at improv, singing in character and all that. I didn’t know that animation would be my primary focus career-wise until the opportunity presented itself. In my case, it was with Transformers and G.I. Joe in the mid-‘80s.

I ran through the shows, and the first thing I noticed was I was surrounded by wonderful actors — many of whom I recognized from working on episodic television in the ‘70s. The cool thing was they were only limited by their skill. It didn’t matter that they would ordinarily be cast as some wacky next-door neighbor on Three’s Company. And yet, I’d see them in an animated project, and I’d go, “Oh my god. They’re nothing like what they are on TV. They’re only limited by their creativity.” It didn’t take me long to think, “Hey man. You’re only 29 years old. This could be the gig,” and I was right.

JOHNSON: Early in your acting career, you studied at the Groundlings, Los Angeles’ legendary comedy/improvisation troupe. How did that experience better equip you going forward with the rest of your career?

I used to refer to Phil as “terrifyingly inspirational” because I’d look at him and be like, “Jesus Christ. I can’t keep up with Phil.” He was about eight years older than I, but it was Phil himself who took me aside one day after working together on post-production voice work for Spaceballs. I was laughing at his incredible skill, going “Dude, you’re just crazy, and I’ll never be able to do that.” But he said, “That’s not the idea. I don’t think I’m as good as Robin Williams, but that’s not the point. The point is to be inspired, explore your own gifts and not limit yourself.”

He really opened my eyes and allowed me to become so much less self-conscious. Now, for a long time, I’ve been utterly unafraid to be as wacky as I need to be at the appropriate times. I mean, I don’t go walking down the street acting like a chicken, but I am not at all encumbered by the fact that I’m a 65-year-old, skinny, white guy with gray hair. My imagination is not limited.

JOHNSON: I’ve only ever interviewed a few other voice actors, and they all had somewhat different answers to this question. How do you typically go about preparing for a new role with a cartoon show? Do you try to get yourself in the headspace of the character?

PAULSEN: I came out here [to L.A.] having been on the road for a couple years doing live performance with music and theater, and I understand when people ask me, “Have you ever thought about doing any real acting?” I know what they mean — they mean movies or television. But it turns out that acting is acting. Mel Blanc was a remarkable actor. It’s the same with Nancy Cartwright, Dan Castellaneta, Hank Azaria, Harry Shearer, Seth MacFarlane…they’re good actors!

So my preparation is no different than it was when I did on-camera stuff. The difference with animation is just that it’s usually much quicker. You don’t have weeks to rehearse. You go in and do it on the fly, although I’ll get the script in advance. I have been hired and continue to be hired often because of my improv skills. I’ll look at something, talk to the other people involved and get an idea of how the character interacts with others in the context of the script. We settle on a sound, but the development of a character’s soul usually comes a little bit further down the road. I mean, it’s pretty difficult to have it all completely fleshed out in an afternoon.

If I were a guest on Three’s Company, I would’ve gotten hired, rehearsed Monday, Tuesday, Wednesday and Thursday, and then shot it twice on Friday. If you’re a lead in a movie, you rehearse for months before you start shooting. If I’m a guest on a cartoon, I’ll get the script, and I’ll look at it. And then, I’ll get there, get a pretty good idea of what’s going on, and then off we go. I love that because I love the impromptu nature. Some little gem will pop up, and it might end up being something like, “Narf!” Now, over time, I’ve met people who like Pinky, and that’s all they want me to say.

JOHNSON: Not long ago, you went through a battle with throat cancer. What was recovering from that like, and what helped you ultimately overcome it?

PAULSEN: What’s that axiom? We make plans and God laughs. [laughs] I’m a voice actor. Did I get nose hair cancer? No. Did I get fingernail cancer? No. What kind of cancer did I get? Throat cancer. In my case, all I did was laugh. I just thought, “The twisted cosmic joke is not lost on me. That’s like a placekicker getting his foot chopped off.”

The treatment was pretty intense, primarily because of the area in which I was being treated. When they start bombarding your throat, your mouth and your head with radiation, it beats you up pretty good. The chemo and radiation worked like a charm. I’m cured. I’m five years out. It took me two-and-a-half years to get to the place where I got used to Rob 2.0. It changes you a lot, both emotionally and physically. But they were able to preserve my ability to do my job.

What really got me through it was…I wrote a book called Voice Lessons, and the subtitle is How a Couple of Ninja Turtles, Pinky, and an Animaniac Saved My Life. That’s not hyperbole. My go-to emotion for joy or despair is humor. I have Pinky, Yakko, Carl Wheezer, Raphael, Donatello, Mighty Max….I have all of these characters literally living in my head in addition to a skill set that allows me to create my own joy irrespective of what I’m doing. I can make myself laugh, and I love doing that. So I fell back on that ability every day, especially when it got very tough.

It was unknown if I could still do my job at the same level once I got through it. The doctor said very clearly, “We can save you. You’ll be able to speak. You’re not going to die from this. But we don’t know [if you’ll still be able to do your job].” That’s where I had to really kick in the humor stuff. But I’ll be damned — I can do it. I was treated and went through that difficult experience before the latest iteration of Animaniacs came out. Mr. Spielberg hired me again. Now, I love being in a position to help and possibly inspire others because folks have certainly done that for me.