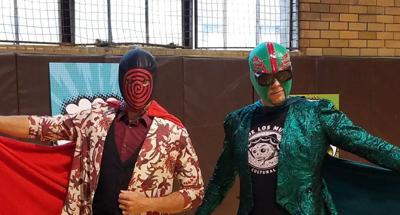 The Central Library atrium might be the last place on earth where you’d expect to see Mexican freestyle wrestling (lucha libre, in Spanish). Yet on Sept. 28, a stadium of sorts will emerge among the bookcases and stately pillars. In this bookish venue, you will be able to see wrestlers (aka luchadores) in colorful masks, occasionally flying through the air, engaging in battle on regulation mats.

The wrestling — the highlight of the daylong Lucha Libro Festival — serves a larger goal, according to festival organizer Eduardo Luna, of La Sardina Gallery.

“The Lucha Libro Festival is important because it will bring together different communities to share in the enjoyment of the spectacle of wrestling, which is a cultural touchstone in many parts of the world, including the U.S. and Mexico,” he said.

There also will be kids’ activities and games, a community market, as well as artist talks with the founders of La Sardina Gallery — the organizers of Lucha Libro — the dynamic masked duo El Camaron Electrónico and Melt-Face.

Neither of these masked hombres were available to talk to NUVO. Festival co-organizer Christopher Dance, however, was able to find the time to talk to us.  Dance is also an art teacher at Pike High School and art director of La Sardina Gallery.

NUVO: Is there a difference between Mexican wrestling and American style wrestling?

NUVO: Tell me about some of the wrestlers who will be involved.

DANCE: We have some iconic wrestlers from this group from the White River wrestling company. They have built up a following and have some of their folks that will be there, and they're going to have some luchadores as part of their company. We do have a really great company, and we're very excited to have them. They have a pretty big following in the Midwest.

NUVO: Will Melt-Face and El Camaron Electrónico be involved?

NUVO: You cooperated with the Indianapolis Public Library to create this event?

DANCE: We pitched this idea to them about a year and a half ago. And we've been working out all the details between wrestling company and the different vendors and ... outreach to all the different libraries. We've done workshops; we've had four workshop facilitators going around almost every other day, to different library branches, doing art making for kids and teens. So we've been doing the mask-making program and printmaking ...

NUVO: Tell me about the setup for the wrestling.

DANCE: They are, at 6 o'clock in the morning, bringing up a whole regulation professional wrestling ring and setting that thing up before the library officially opens to the public right in the middle of the atrium of the library.

And then we have vendors. We've got two different art exhibits happening in different wings of the library, with authors that write specifically about Midwest history with professional wrestling. There are lots of different vendors related to history and culture of Lucha Libre. So we’re pretty excited about that. I think we have 20 vendors in all. It'll be all that on top of the art making activities, the actual wrestling going on. ... There's at least four or five matches happening throughout the day.

Will Melt-Face and El Camaron Electrónico have an exhibition match?

DANCE: Because of their unique powers, and then also their inability to obtain insurance and licensing, they may not be able to. …

NUVO: Do you have kids of your own?

DANCE: Yep. My family's coming. And then my son will be there. He's six and a half. He's really excited about ... coming to some of the small events and stuff leading up to, and I think he's really pumped up.'

A banner art year in a time of dread

After decades of existence, Footlite Musicals still has a knack for bringing people together through theater