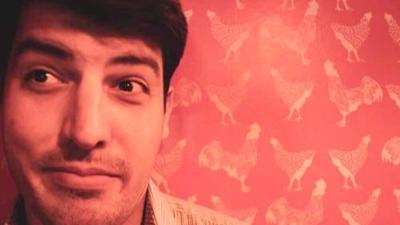 For comedian Joe Bates, the coronavirus pandemic has been a blessing in disguise.

“I would say having a global pandemic and being forced to live at home has led to a different experience that causes me to be like, 'Okay, this is new. What’s funny about it?' Every comedian is talking about it. But at the same time, why wouldn’t we? Literally, everybody is going through this,” Bates says. “So I think that’s opened up some other parts of my brain, to start thinking like that. It’s not all COVID jokes. It just opened up a different area of creativity, which has helped a lot.”

Bates will celebrate the release of his first-ever live album, aptly titled Joe Bates Joe Bates Joe Bates by Joe Bates, with a performance at the White Rabbit Cabaret on Jan. 22. Ahead of the show, our Seth Johnson caught up with Bates for a Zoom interview. Read or watch their full conversation below.

SETH JOHNSON: Before we get talking about your album, I want to go back a little bit. Where are you originally from Joe?

JOE BATES: I’ve moved 14 times in my life, so I’m not really from anywhere. I’m just kind of from America. [laughs] But I was born in West Virginia. I lived in Houston about three or four times, and I started stand-up in Houston. So I guess if I had to say [I’m from] anywhere, I’d say Houston, Texas.

JOHNSON: When did you come to Indy?

BATES: I had a job in Chicago. They said I’d be in Indianapolis for two weeks, and I said, “Yeah, sure. No problem. I’ll do that.” I have been here for over five years. I guess I wasn’t very good at that job if it was only supposed to take two weeks. [laughs]

JOHNSON: When was your interest in comedy first sparked?

BATES: I liked stand-up a lot when I was a kid. I listened to Bob Newhart’s Button-Down stand-up when I was really young and watched a lot of stand-up on TV, like early Comedy Central. The Amazing Jonathan was a stand-up that I really liked. I’m glad I liked the stand-up and not the magic part — that would’ve been bad.

I tried it out when I was 18. It went really poorly. Someone in the crowd went, “Wamp, wamp, wamp,” and that hurts a lot still to this day. That was at the Laff Stop in Houston. Seven years later, I decided to try it again. It did not go as poorly, and I’ve been doing it ever since.

JOHNSON: That second time you tried it, were you also in Houston?

BATES: No. I was actually in San Antonio for work. I was at the LOL Comedy Club. I sat through four hours of open mic comedy, which I had never really done before. I realized, “Oh. No one’s very good when they start.” I hadn’t realized that before. Still, I’m not very good, but I’m getting better.

JOHNSON: What about Indy’s comedy scene stands out to you?

BATES: I’ve been in Houston, and for a couple years I was in the Bay Area. [I was also in] Chicago for a short period. I think Indianapolis is benefited and hindered by the fact that it’s a smaller scene — there aren’t that many comics. I mean, Seth, I think you know all of them at this point. [laughs]

But on top of that, there are a lot of comedy clubs in the vicinity, and not just in Indianapolis. When I moved here, there were three or four, and that’s dwindled between two to four clubs. The independent scene has fluctuated as well. There’s some really cool stuff. You have the White Rabbit Cabaret, Let’s Comedy, Rocketship, and Red Flag. They’ve all boomed and busted in their own ways.

JOHNSON: How did COVID impact the last year of comedy work for you?

BATES: I tried not to do open mics during COVID, so I was usually just doing shows. Before that, I wasn’t really touring, but I was doing as much as I possibly could show-wise, traveling out of town for club work and various festivals.

I actually think I’m one of the comedians who have had a good experience during COVID because I recorded my album in January [of 2020]. Right afterward, I was moving up to Chicago to do some stuff. It felt weird to still be doing jokes that I did on my album, trying to impress people.

I didn’t realize, but it was a much-needed break. It’s been a long break. Is it worth all those people dying for me to relax a little bit? It’s up in the air. That hasn’t been decided. [laughs] But it’s actually been nice to relax, hang out with my girlfriend, watch TV and not really do much. When I recently did a show at the White Rabbit six months ago, I did a whole new 30 that came from all the experiences, and that felt really good.

JOHNSON: Are you still working for The Bob & Tom Show?

BATES: I am still working for Bob & Tom. They don’t know it but don’t tell ‘em. [laughs]

JOHNSON: When did that start, and what do you enjoy about working for them?

BATES: That started a few years ago. It’s interesting working for them. They give you a bunch of headlines, and you write jokes for those headlines. The more I’ve done stand-up throughout my life it’s just like, “Hey. This experience is a new thing, and that is only going to help my stand-up and career later on.”

It’s a good writing exercise. And on top of that, you’re helping out a radio show. Who’s going to argue with that, ya know?

JOHNSON: What does the day-to-day with writing for Bob & Tom look like? I know other local comics, like Dwight Simmons, also write for the show as well.

BATES: We’re not meeting each other, per se. It’s more like there’s an online batch of all the headlines. You’re given those articles, and then everyone individually just has to update it. We’re not really talking to each other. We can see what each other is writing and judge them, but we don’t really collaborate. The people who put it all together do all the work, and we’re just writing jokes.

JOHNSON: What do you remember from when you recorded your album?

BATES: This sounds horrible, but that day I just didn’t want to really think about anything. We did it in Houston, Texas at the Secret Group, which is a really cool club there. They do a lot of one-off shows. I believe I’m the only album to be released that was recorded at the Secret Group, and it’s been around for a few years.

That day, me and my girlfriend just walked around Houston and didn’t really talk about comedy. We went to the Holocaust Museum in Houston, which I know really doesn’t…[laughs] It’s one of the best museums out there. I would recommend it to everybody. But just not thinking about it helped me to get through the day to get prepared for the show. We also watched the two Amazing Spider-Man movies with Andrew Garfield, which really kept me away from laughing or enjoying anything.

The night came, and it was two sold-out shows. The crowds were fantastic. I had a really good time. I honestly couldn’t have asked for a better night, especially with the early show. After that show was done, I was like, “I did the thing.” It’d been almost nine years in the making at the time we recorded it. It was a very weird show because I had some character work on it as well. I opened up for myself so I could get double the pay. But it was great. It really turned out really well.

JOHNSON: Tell me more about how it turned out. I assume you did the same set twice and then took the best moments from each, yeah?

BATES: At both shows, I did the same set. Usually when someone records an album, they do multiple shows with the same exact set, and then they just edit it. For me, the first show was basically the entire album.

On Tour Records has been really good. They’re the ones producing the album. They’ve produced some great albums with Jeff Oskay and Brent Terhune. They couldn’t have been more helpful.

Isaac Landfert, who you and I know, edited the album. We had some sketches in it, and he just did a great job at really making it seem like it all flowed together really well. He also had to put up with me. I would say my work style is a creative person who is lazy. So having Isaac, who’s very organized and on the ball, made this the best comedy album ever made, dare I say? [laughs] But it’s a really weird album, and it wouldn’t be as successful without the people who helped me get it to where it is.

JOHNSON: What do you have planned in conjunction with the album’s release?

BATES: We’re going to have a very safe, socially-distanced show at the White Rabbit on Jan. 22, and it’s going to be a very strange show. It’s basically a stand-up show, but it’s going to be a little bit different because my album is a little bit different. That has my girlfriend Katie Hetlage on it, along with Sam Griswold, Lucas Waterfill, Trent Mabry and Dwight Simmons, who will be hosting it.