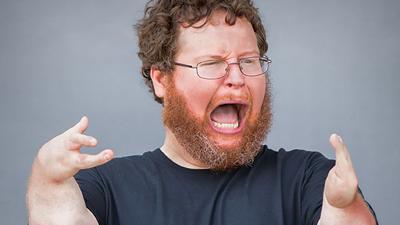 Life has been a whole lot busier for Ryan Niemiller since the Indy-based comic finished third on Season 14 of America’s Got Talent. This month alone, for example, he will have performed on 26 out of 30 nights, with shows in nine states as well as Canada.

“This is what I wanted, so I’m tired but excited at the same time,” he says. “Because no one has to care or book me. So I’m loving it. I’m just trying to stay busy.”

Nevertheless, Niemiller hopes this is only the beginning of bigger things to come.

“America’s Got Talent is great, and I’ll always be thankful to them,” he says. “But if people are still referring to me as the guy from AGT in five years, then I’ve gone nowhere. I want this to be the springboard and not the peak.”

On Tuesday, Nov. 26, Niemiller will return to Indy for two hometown shows at the White Rabbit Cabaret. Beforehand, our Seth Johnson caught up with him for a phone interview, discussing Howie Mandel, self-deprecation, and much more.

SETH JOHNSON: I’m visually impaired, so your bits on being handicapped have always been very relatable to me. That being said, I can definitely admit that I’m personally a fan of your work.

RYAN NIEMILLER: I appreciate it. Thank you man. It’s been a very surreal ride so far.

JOHNSON: I know you have Hoosier ties, but where did you originally grow up?

NIEMILLER: I grew up in DeMotte, Indiana, which is a little town up in “The Region.” It’s about 20 or so miles south of Valparaiso.

JOHNSON: Was comedy something you were interested in at a young age?

NIEMILLER: It was actually. Technically, my first stand-up performance would’ve been in first grade at a talent show. I don’t even know why I knew that stand-up comedy was a thing — I have no memory of why I had that connotation. But everyone else wanted to sing or do whatever, and I got a joke book, wrote down 10 really awful jokes, and read them. [laughs]

JOHNSON: When would you say you started taking comedy more seriously?

NIEMILLER: That would’ve been right after college. I went to Indiana State and got a degree in theater. So I was doing some stage acting and some improv in college. But as much as I loved both of those things, and still do, I didn’t feel like I was telling my story. I had this sense of, “Theater is great, but everyone has already told Shakespeare’s story a million times.”

So right after graduating, I packed up my car and moved to L.A. because I didn’t know you could start out here [in Indiana].

JOHNSON: You mentioned wanting to tell your story. In your stand-up, I’ve noticed that you often poke fun at yourself and your impairment. Is that something you’ve always been comfortable doing on stage?

NIEMILLER: It’s sort of what I always did in real life to make other people comfortable. I probably don’t have to tell you this, but…the second somebody finds out that you’re visually impaired, I’m sure there are people that want to talk to you differently or hand-hold you with stuff. That was the thing with me too — people were always treating me differently.

So I learned really early that if I made jokes to get people comfortable, they’d leave me be if I wanted them to. I figured out, “I’m really good at doing that, and I also like making people laugh.” And it transitioned that way. So I do poke fun at myself a little bit, but I’m more poking fun at how uncomfortable people are.

JOHNSON: Absolutely. I can totally relate with that. Were there any comedians that maybe helped inform your approach at all?

NIEMILLER: Not necessarily with content, but more with style. I was always a big fan of Jim Gaffigan. I actually used to accidentally do the Jim Gaffigan voice when I first started. Someone brought it up to me, and I was like, “Oh no! I’m not meaning to do that.”

As far as that style, I always like self-deprecating comics. I’ve always appreciated anyone who has the self-awareness to know their situation and make it work for them.

JOHNSON: Earlier, you mentioned your initial move to L.A. What was that experience like?

NIEMILLER: I sort of lucked out when I first moved out there. I had a roommate in college who was an engineer, and he was working for L.A. County. He had a free room, and he knew I wanted to start doing stand-up work. So he said, “As long as you’re not sitting around doing nothing, I won’t charge you rent.” So I essentially had a sugar daddy, which was nice.

As far as comedy goes, I just looked up stand-up classes, and there was a class at The Ice House. I signed up for that class and started there. Then once you start there, you get the connections to those people and know people who do open mics. It all kind of snowballed from there.

I didn’t really like L.A. I wasn’t emotionally ready to live there. I didn’t have any actual job skills. I rushed out there too, so I didn’t really have any money saved. So the L.A. part of it sucked, but the comedy part was great. I went out every night just because I enjoyed that part of it so much.

JOHNSON: Just to clarify, where are you currently based out of then?

NIEMILLER: I technically live in Indianapolis — I’m on the southside. But realistically, I live in airports and hotels.

JOHNSON: I’m curious to hear the story behind your recent appearance on America’s Got Talent. What steps did you take to get there?

NIEMILLER: I’d been trying to get on that show in some form or fashion for five years. Taylor Williamson was runner-up on the show in Season 8. He’s an old friend of mine from L.A., so we’d known each other for years and he recommended me to do an audition.

I went and did it and was very cocky at the time. I was at the zone a lot of comics get into where you’re like, “Ya know what? I’m just killin’ it right now. I only have to do 90 seconds for this audition? I’m already doing way more than that, so I’ll kill it.” So I didn’t really prepare that much and just went in assuming I would figure it out. And I ate it. [laughs] It did not go well. It was a good learning experience. I learned that you had to take this stuff seriously, and that natural talent alone doesn’t always get results.

A couple years ago, i reached back out to try and do it again. I went to a site in Milwaukee and had a really good audition that time. I didn’t quite make the cut, but found out later that I was close. Then, I tried again this year, and auditioned with a video this time. I had a video that had gone viral in those two years. And since that video was from a TV taping, they were able to see what my comedy looks like for television, and they loved it. At that point, I got invited to do the audition in front of the judges.

JOHNSON: What were some of the more surreal moments of being a contestant on the show?

NIEMILLER: The fact that Howie Mandel loves me and loves my comedy is absurd to me. A lot of people may not understand what a legend in comedy he is, especially if you’re a little bit younger. A lot of people know him from Bobby’s World or as the weird, quirky judge from America’s Got Talent. But that dude’s a legend in stand-up. He still does 100 dates a year or something like that. It’s absurd how much he still works and loves stand-up.

I’m also friends with Terry Crews now. That’s weird. [laughs] He’s such a nice dude, and he’s so fun to talk to. But seeing Terry Crews comment on my Instagram posts is weird. It’s also such a cool rush to be recognized at the airport or when I’m out to dinner. The fact that people care about that show and care about me so much…I hope I never get used to that.

Because nobody has to care. I’d been grinding for 13 years before I finally got this opportunity. So I don’t want to take it for granted or be irritated that someone wants to take a picture, when for 13 years, nobody really cared all that much. So it’s still incredibly surreal and humbling that people are so excited to meet me.

JOHNSON: Being that you now live in Indianapolis, what excites you about the current state of comedy in the city?

NIEMILLER: I like how Indianapolis comedy gets stuff done on its own. That’s kind of my story. I got on America’s Got Talent from Indianapolis. I didn’t have the benefit of being around L.A. all the time to be able to be in their face.

There’s some great talent here. And when people are told no, they just do their own stuff. People will be like, “Oh, the club doesn’t want me yet? I’ll promote my own shows then.” There’s a lot of that work ethic. It can sometimes even be a little detrimental. Like, Indianapolis shows are so supportive and so good that I think comics sometimes don’t leave the city enough. I think it’s a sign of a really good scene when people don’t want to leave the scene enough. [laughs]

The Nonstop Life of Bob Saget

An Interview with Megan Gailey

It’s me, Seth Johnson, back with another update on my many adventures.

A Conversation with Kevin Nealon

Ahead of shows in Indianapolis, the comedy great discusses Dana Carvey, Australia wildfires, and more.