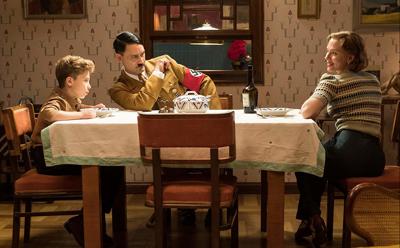 The way movie trailers work is that studio execs brainstorm strategies for getting butts into theater seats. Clips and a synopsis of what they want the preview to accomplish are then sent to companies that produce the final trailer.

Far removed from the input of the filmmakers (one important trailer production company is in North Carolina), trailers reflect what the pencil pushers want potential ticket buyers to believe the movie is. Companies that produce trailers very seldom see a film before doing their work.

The trailers you’ve seen for Jojo Rabbit have little to do with the actual movie. Screenwriter\ actor\director Taika Watiti’s exceptional satire is not “Monty Python Does Hitler.” Granted, there are Pythonesque moments in the film, but there’s a degree of tragedy, grace, and heroism that transcends even The Holy Grail.

Jojo Rabbit is a coming of age story set in a small German town near the end of WWII. The 10- year-old boy being forced to come of age prematurely is a proud member of the Hitler Youth who’s fully prepared to give his life for the Führer. The young Nazi’s world is turned upside down when he discovers that his beloved mother is hiding a 14-year-old Jewish girl in the attic

The boy wrestles with his dilemma; consulting with his best buddy and talking to his imaginary friend, Adolph Hitler.

STOP! I’ve been trying to sort out this Hitler thing ever since I saw the movie. A cartoonish version of Adolph Hitler?! Slapstick Nazis?

Let’s be clear, Jojo portrays Nazis as being as efficiently murderous as they were. One or two are also presented as human beings. Sam Rockwell, for example, plays a character you come to increasingly appreciate as the movie progresses. By the way, he’s a Nazi.

So what’s the point of goofy Hitler and sympathetic Nazis. I think it’s an attempt to create a surreal universe that forces us to think about what’s happening in the movie as well as what happened in 1945.

Jojo Rabbit is not Hogan’s Heroes. It’s also not Shindler’s List. If you see this movie, you’re going to have to work harder than either of those productions forced you to.

Waititi’s hardly the first filmmaker to present murderous thugs as complex characters. If he dares you to accept that his happen to be Nazis, are you up to the challenge?

I don’t usually pay all that much attention to things like sets and soundtracks. If the story grabs me, I’m swept away. This time, I was taken by the sets and the camerawork. Waititi creates a mood that’s simultaneously tender and foreboding. His sets are effectively arranged without being so meticulous they appear artificial.

Everything preceding notwithstanding, it’s the actors’ portrayals I’ll remember most about this film.

Scarlett Johansson has simply become the foremost actress of her generation. Her funny, heartbreaking, granite-strong mother in JoJo provides the film with its foundation. If in earlier times, Meryl Streep’s participation was enough to encourage you to buy a ticket to a particular movie, Johansson has inherited that mantle.

Which brings us to Waititi’s appearance in the film. He wrote the Hitler character into his adapted screenplay and decided to play the role himself.

It’s always a pleasure to see the creator of What We Do in the Shadows act. He has a compelling presence that brings a depth to his characters, be they heroes or villains.

The stars of this movie, however, are three child actors who are simply terrific. Archie Yates, as Jojo’s best friend, Yorki, radiates a matronly quality that reminded me of an empathetic aunt. It’s a gently amusing part that doesn’t strain for laughs.

Roman Griffin Davis as the nascent Nazi and Thomasin McKenzie as the wise-beyond-her-years Jewess in hiding are mesmerizing. The complexity of emotion these kids convey suggests we’ll be seeing lots more of them both sooner rather than later

Jojo Rabbit is terrifying, heartbreaking, violent, tender, cruel, surreal, and occasionally hilarious. I ask you again, are you up to the challenge?