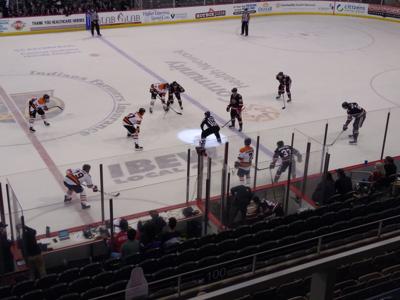 Friday night fights were back at the Indiana Farmers Coliseum as the Fuel put up their dukes but fell short in a 4-1 losing effort to Ft. Wayne.

Everywhere you looked, there was a scrappy skirmish breaking out with a little bit of hockey sprinkled into the affair. The Ft. Wayne Komets came in hostile as usual, trying to crack a two-game losing streak after the Wheeling Nailers had their way with them and made this game into a dirty battle with mischievous tactics and bush-league antics.

The Komets received their stellar goalkeeper Stefanos Lekkas back in the nick of time after he was released by the Rochester Americans of the AHL yesterday. Lekkas had a 6-1 record and was giving up less than two goals per game with Ft. Wayne when he was called up to Rochester and dropped soon thereafter.

The theme of the night was Made in America, and these two fiery, ferocious Indiana hockey clubs would wave the flag high on this night with an unlimited amount of intense brawling and a contentious, competitive spirit for stick and puck. This would be the first bout of a three-game series between these two Hoosier hockey foes and both teams wanted to set the tone on a quarrelsome, electrifying evening.

The first period would not disappoint at the 9:53 mark when Indy Fuel enforcer Ryan Zuhlsdorf had Zach Pochiro charging onto his back out of control in the attack zone before he decided if you want to play with fire, you may get burned. Pochiro is known for his aggressive play and crying to the refs when he doesn’t get his way, but he got caught off his skates on Zuhlsdorf’s back and was flipped end-over-end onto the ice and flat like a pancake.

The Komets, featuring Justin Vaive and Brandon Hawkins, took offense to this and the entire team raced to swallow up Zuhlsdorf with punches as the melee ensued.

It was only minutes later with Indianapolis on the power play man-advantage that the Fuel had a miscue at the blue line and Anthony Nellis split two defenders and stole the puck on a shot gone wrong.

Komets forward Nellis parted the seas and skated with a full head of steam from coast to coast with the puck dangling on his stick and slid it five-hole along the ice past Indy netminder Dan Bakala for the one goal cushion and early lead. The Fuel looked a bit lethargic and seemed to have a mental block when facing their northwest Indiana enemies as they went into the locker room down 14-6 in shots on goal for the first stage of this contest.

The second period proved to be a tenacious turnaround for Indy Fuel hockey. With 16:35 left to play in the stanza, Fuel winger Spencer Watson skated in on a breakaway, lulled Komets goalie Lekkas to sleep and opened up the right side of the cage. Watson flicked a theatrical wrister that banged off the blue post before the Ft. Wayne keeper fell back and laid on top of the vulcanized rubber in full snow angel fashion.

Only 50 seconds later, Ft. Wayne would make their first mistake when Matthew Boudens got his hand caught in the cookie jar by lifting the stick and tripping up a streaking Fuel attacker for a 2-minute penalty in the sin bin. Indianapolis would capitalize on the power play opportunity at the 15:24 mark of the second period when Terry Broadhurst threw a rubber laser in front of the net where Matt Marcinew was positioned with a dynamite deflection over Stephanos Lekkas' leg pad for the 1-1 tie game and his 16th goal of the ECHL campaign.

At the 3:02 mark of the period, Ft. Wayne would be quite fortunate to stave off the attack of Indianapolis at the other end as Marcus McIvor reversed the tide and shot a slow-moving flutter puck from the face-off circle that was redirected by Zach Pochiro over the glove-hand of Fuel goalie Dan Bakala to tickle the twine for the 2-1 advantage.

With 54 seconds to play in the period, you could tell the physical play was on a broad scale when Fuel veteran Michael Pelech took an extremely hard hit into the corner of the Komets attack zone and the plexiglass came loose with an entire sheet falling onto the ice and a sizable timeout for repairs. The Fuel had outshot their in-state rival 22-19 going into the final period but was still down a score. The 2nd-period intermission starred Fuel fan and Marine Nick Woodruff, who was able to shoot the prize shot through the right slot of the wood board, covering the goal to win $1,000 cash.

The third period was all the away team needed to pull away as Fuel captain Cliff Watson went for the big check along the sideboards and came up empty against Ft. Wayne native and scoring threat Jackson Leef. Komets left-winger Leef controlled the puck and skated around the face-off circle with Watson trailing behind for a last-ditch effort to jar the puck loose before scuttling the saucer past the right leg pad of Indy’s keeper Dan Bakala for a commanding 3-1 lead.

The Fort poured a little salt in the home team’s wound with 7 minutes left in the game when Komets Captain AJ Jenks was stationed on the doorstep of the crease and accepted a dime pass from Stephen Harper. The Komets received a power-play chance off a weak joke penalty and took advantage as Jenks spun around with the puck and knocked it home over the left shoulder of Indy’s Barricade Dan Bakala for the three-goal lead and eventual 4-1 outcome.

“Count” Bakala was exceptional in combatting the shot barrage by Ft. Wayne with 27 saves, but he just couldn’t get enough goal support from his team, who had a 32-28 shots on goal advantage but couldn’t light the lamp enough for the home victory.