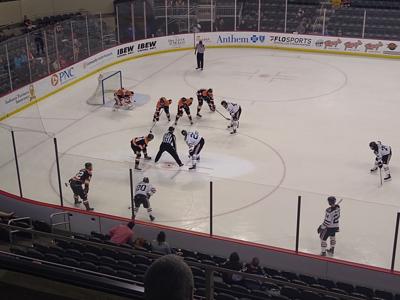 The Indy Fuel had a two goal lead late in this game but failed to see it through to the end as they fell 5-4 in the overtime session to Fort Wayne at the Indiana Farmers Coliseum. Indianapolis came into this contest having lost seven of their last 10 overall, but there’s nothing like facing your I-69 arch-nemesis to put fire in their eyes and they dominated with effort and hustle throughout this game. The two teams entered the game snarling and sniffing out the competition on Pucks and Paws day where we were treated to the pets filling the stands at the 38th street doghouse.

The game was a back and forth affair during the first period with the Fuel attacking early and often to take a 10-6 shots on goal advantage into the intermission with no scoring from either squad. However, the entertainment was not over as time expired and zeros filled the clock to end the first period. Both teams had a chip on their shoulder and weren't done with each other as they barked and growled into fisticuffs and feisty shoving along the sideboards before throwing their equipment to the ice.

The heated battle featured 203 pound Tommy Apap going up against 216 pound Komets enforcer Morgan Adams-Moisan who is known for his 70+ minutes of penalty box time above any other hockey stats. The two combatants would go round and round exchanging a series of blows before Michigan State prospect Apap lost his balance and the refs split them up to send the foes into their respective locker rooms.

The second stanza got off to a wild start as Komets forward Jackson Leef created a turnover in the neutral zone and stole the puck at the blue line before skating in one-on-one with Indy goalkeeper Dan Bakala and rifling a shot off the crossbar and out of play a minute into the period. A minute later at 18:11, Indianapolis was gearing up to defend their home ice on the power play when Nick Hutchison received a precise pass on the right doorstep from Jared Thomas on the edge of the Komets crease.

Hutchison spun around with full control of the rolling puck and fluttered a shot off Ft. Wayne net minder’s left leg pad, spiraling end-over-end through the air and past the goal line for a 1-0 Indy scoring advantage and his 5th goal with the Fuel. The Komets goalie Robbie Beydoun from the University of Wisconsin and Michigan Tech was 3-0 entering this game with Ft. Wayne and only giving up 1 goal per game on average with 95% Saves, but that would be far from the case as he was rattled in the cage on this day.

At the 13 minute mark of the 2nd period, the Northeast Indiana opponent would battle back as Komets sniper Anthony Nellis found a gift waiting for him in the low slot when Marc-Olivier Roy deflected a roaring shot from the blue line. The Komets screened Fuel Goalie Bakala effectively and he couldn’t find the saucer before Nellis nailed a backhand into the open cage on the left side for his 8th goal of the season and 1-1 tie game. Indianapolis was holding off their in-state rival with a 15-11 shots on goal advantage midway through the game and were licking their chops to find a hole and take the lead.

The nine-minute mark would do just that for the Fuel as Ft. Wayne veteran Shawn Szydlowski got his hand caught in the cookie jar with a costly penalty mistake for tripping and put Indy in the driver’s seat with a man advantage and a 20% success rate on the power play. With 8:14 remaining in the 2nd stage, Jared Thomas ripped a wrist shot from the faceoff circle up and over Komets keeper Beydoun’s glove into the top right corner of the goal to light the lamp and take a 2-1 edge on his 6th goal of the campaign.

The scoring window would close in the period, but the fights certainly kept coming. At 5:37 of the 2nd period, both teams would let the dogs out as dirty Komets enforcer Justin Vaive (55 penalty minutes) would go toe to toe with Indy’s physical specimen Nick Hutchison (30 penalty minutes) before Vaive wrangled him to the ground and fell on top of Hutch in this bout. Both players received a 10-minute fighting misconduct and were escorted to the locker rooms as they fired up the raucous crowd at the State Fairgrounds. The second period intermission featured the traditional prize shot for a few fans to come down onto the ice and try to score a goal through the wooden board covering the goal. Indianapolis youngster Keaton Walker shuttled a shot from center ice through the tiny right slot of the goal along the ice to win $1,000 for Indy Youth Hockey and send the fans into a frenzy.

The third period was highlighted with five goals of feverish hockey as Indianapolis broke through first while facing the challenge of an early penalty kill. With 18:34 remaining in the final period, the Fuel would sound the horns with a shorthanded shocking score. Fuel forward Terry Broadhurst stole the biscuit from Ft. Wayne’s power-play opportunity at the middle face-off circle and raced all alone towards the Ft. Wayne net minder Robbie Beydoun. The Chicago native Broadhurst performed a triple deke dazzler before slapping the puck into the hockey horizon over Beydoun’s right shoulder for the 3-1 home team lead. One of the concerns this year for the Fuel at home has been taking their foot off the gas and not staying hungry after scoring a critical goal. Not even two minutes later at 16:58, Komets’ Marc-Olivier Roy blasted a far blue-line shot with traffic in front that clanked off Fuel goalie Dan Bakala’s chest pad. The juicy, dangerous rebound landed on the doorstep, and Ft. Wayne forward Anthony Nellis was there to punch home his 9th goal of the season past the goalie’s glove side to cut the margin in half at 3-2.

Indianapolis knew they needed an insurance goal against their aggressive, crafty rival from The Three Rivers Region and found the treasure at the 11:33 mark of the 3rd period. 32-year-old Terry Broadhuust wasn’t through with abusing Ft. Wayne goalie Beydoun quite yet as he received a needle-threading pass from team scoring leader Matt Marcinew to split the Komets defenders in the attack zone and shot the vulcanized disc 5-hole between the net minders leg pads for his second tally of the game and a commanding 4-2 Fuel lead. The arena went bonkers and the Fuel crowd was confident of their team icing the game to kill the will of the Komets with a 2-goal advantage and 10 minutes left in the contest.

Unfortunately, Ft. Wayne’s Finest has the mental edge in these situations over the years and has a never-say-die attitude late in the game. At 9:41 remaining in regulation, Komets forward Alan Lyszczarczyk skated to the summit of the crease and had a marvelous deflection to tip in his 7th goal over Fuel goalie “Count” Bakala’s left shoulder and inch closer in this hockey war down 4-3.

Indianapolis would hang tough and keep the Komets at bay in the latter stages of the game before Ft. Wayne coach Ben Boudreau signaled his goalie Beydoun to come off the ice for the 6-on-5 man advantage with 1:40 left in the 3rd. The Fuel somehow couldn’t capitalize on the Komets empty net and Ft. Wayne came up with the goods at 20 seconds left when Matt Murphy rocketed a shot through congestion from the right face-off circle which slid past Fuel net minder Bakala for the 4-4 tie and overtime session. The Komets fans couldn’t believe their eyes as Indy let them back in the game and were headed for a seven-minute fourth period that should have never been in the cards. The Komets eventually found the ace up their sleeve with a minute remaining in the three-on-three overtime and a minute remaining before a shootout.

The Fuel was slow to the puck and looked disappointed after missing on a few wide-open scoring chances when Komets forward Stephen Harper glided into the zone from the sideboards and unleashed a torpedo wrister that beamed past Bakala’s Blocker into the top right corner of the cage for the Ft. Wayne victory and their 10th win on the road in the ECHL.