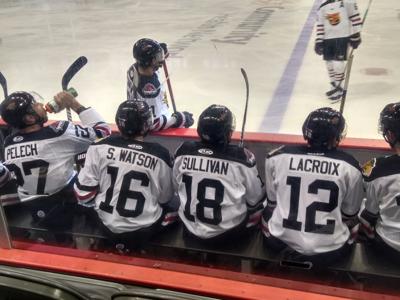 The Indy Fuel hosted the Wheeling Nailers on Wednesday night at Indiana Farmers Coliseum. These two teams have already seen each other over 10 times this season and have become familiar with each other's tendencies, aggressive nature and strategies. Many of the games have gone to overtime and been neck and neck, but on this evening the Fuel would protect their home ice and make no doubt of the outcome with a 6-0 victory on Wednesday.

It certainly was all-you-can eat night for the fans and Indy Fuel hockey wanted to get in on the action with a feast of their own. The team had suffered a few tough, embarrassing losses to their in-state arch nemesis over the weekend being out-scored 11-1 over the last two home games. This would be the first time all season Indianapolis would get beat in back-to-back home games, but they were looking to mount a huge comeback in the form of hammering the Nailers of Wheeling, West Virginia.

Back in net for the Fuel would be starting goalie  and Calgary, Alberta native Dan Bakala who was 11-1 coming into this eleventh showdown with Wheeling. So far, each of the four games at home against the Nailers had gone into Overtime and Bakala had won three out of four with outstanding kick saves, acrobatic glove skills and versatile pipe to pipe range in the crease. The Fuel have won eight of their first 10 meetings with Wheeling thus far, but there was no love lost between these two foes and the fans always get their share of exciting fights, gruesome checking and creative stick handling amongst the teams.

Indy's outstanding goalie "Count" Bakala had to weather the storm early on as he faced an onslaught of powerful shots from the opposition. Wheeling doubled up the Fuel in shots on goal in the first 20 minutes of play as Indy has gotten off to many slow starts in the first period this year. Attempting to buck that spiraling trend of sputtering offense early with 1:32 remaining in the period, 6 foot 3 inch Michael Pelech, who owns the face off circle quite often, sent a floating saucer pass across the ice on the bounce.

On the receiving end was defenseman Mike Lee out of Connecticut, who knocked down the puck and twisted his hips to transfer the rubber to his forehand side for a wrist shot over the trapper of Wheeling goalie Francois Brassard for the first goal of the game in the top shelf. Brassard enter the game with a 4-3 record and only giving up 2.5 goals per game, but he was in for a challenging battle on this night and Indianapolis was eager for a bounce back performance.

Indy netminder Bakala with his 92% save percentage on the season was riding high in this game as Sean Josling of the Nailers skated in cleanly and blazed a slap shot that was gloved easily by the goaltender and would be a sign of things to come. Not a minute later, Wheeling scavengers Nick Rivera and Brady Tomlak would attack the crease from both sides with a flurry of quality goal chances, but "Count" Bakala would fling his body into the butterfly position by kicking out his leg pads and sticking away a series of juicy shots off balanced with major pressure in front.

The Fuel were motivated by their impressive goaltender and would double their lead at the 15:44 mark of the 2nd period when Jared Thomas dropped the puck back to Willie Raskob, who skated around the face off circle and a missile through traffic to find an opening over the stick of Brassard to make it 2-zip.

Indy would go on a roll at the 13:10 mark as Michael Pelech would pick up his second assist by skating through the attack zone and releasing a backhand pass. The puck arrived on the tape of Matt Marcinew's stick before he would send a fluttering shot that glanced off the goalies leg pads and split them to trickle into the onion bag and make it a three goal margin. A minute later, Spencer Watson would skate in with the puck on an odd man rush while Diego Cuglietta charged on the opposite side.

Indy Captain Watson kept the puck on his twig, controlling it around a sprawling defenseman, and broke through the threshold with a mighty ripper high over Brassard's glove to make it a four goal game and lead to a disparaging goalie change for Wheeling. With 30 seconds remaining in the 2nd stanza, Nic Pierog would retrieve the puck along the dasher boards from Marcinew, skated past his own bench and threaded the needle with a stinger over backup goalie Alex D'Orio's blocker for his ECHL league-leading 16th goal of the season into the top right corner of the net for a four-goal second period. Time out Wheeling Nailers, Time in your crazed Indy hockey fans after that scoring display!

As if the Indianapolis hockey team wasn't firing on all cylinders, two of the fans called down to shoot from center ice scored on their prize shots at the intermission. Dale French won a game jersey by scoring through the small hole on the left side of the boarded wall and Bryan Westbrook won a thousand dollars by shooting the rubber through a tiny hole on the right side of the wood board blocking the net entry.

The game was all wrapped up for the Indy Fuel to win their 21st of the season when sparkplug Matt Marcinew skated in with one second remaining and left a shot spinning like a top right in front of Wheeling goalie D'Orio which was chased down by Michael Pelech and hammered home for the 6-0 win and Indy's 12th win at home to break their two game losing streak. Fuel goalkeeper Dan Bakala was standing on his head like a magician to record his 2nd shutout of the season with 20 glorious saves to stifle the Nailers and bring great energy to the Coliseum for their faithful in this storied seventh season of play.