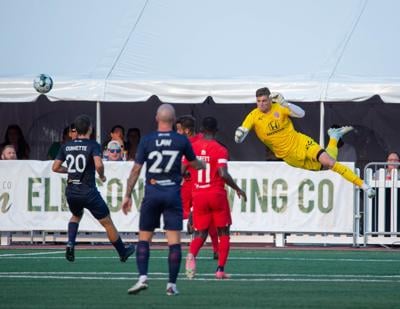 It was another frustrating night as the Indy Eleven lost 1-0 to division leaders Birmingham Legion FC. It was an early penalty kick from Neco Brett that gave the visitors all three points. The loss keeps Indy in fourth place in the Central Division Standings.

The visitors dominated the early possession and took the lead in the eighth minute when Indy defender Karl Ouimette made contact with J.J Williams inside the penalty area.  Legion forward Neco Brett stepped up and sent Bobby Edwards the wrong way to give Birmingham the lead.

Indy’s first shot on target came in the 34th minute when leading scorer Arteaga forced Birmingham keeper Matt VanOekel into his first save of the contest.  Gordon Wild had the Eleven’s next attempt a minute later but his shot just went wide of the post.

The second half saw Indy on the front foot when midfielder Nick Moon’s deflected shot was saved by a scrambling VanOekel. In the 64th minute, Wild’s shot went just wide after being set up by Arteaga.  Birmingham was still looking dangerous on the counterattack when Edwards got down low to save Brett’s breakaway attempt.

Indy Eleven will return home on Saturday, July 17th when they host Memphis 901.