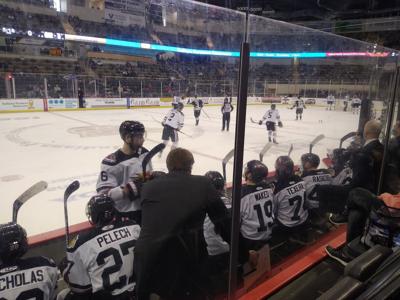 Sunday matinees are great entertainment for Indy Fuel fans. This Sunday they were treated to a 3-1 victory over the Wheeling Nailers at the Indiana Farmers Coliseum. Indianapolis had been putting on the brakes lately, losing five of their last six games and looking for a bounce-back performance and their 10th triumph over a team they have faced more than any other from Wheeling, West Virginia. The Fuel has only scored five goals in their last three games and suffered a tough 6-0 shutout loss at the WesBanco Arena where the Nailers call home last Wednesday.

You could tell the Fuel had a restful weekend and they came out like gangbusters with superb energy and crisp tape-to-tape passing. Indy had a pep in their step and was running on high octane right from the get-go with solid line changes, good vision for advancing the puck out of their own end, and stellar communication. At the 13 minute mark of the first period, Indianapolis drew first blood when Assistant Captain Matthew Thompson found Fuel forward Michael Pelech on the far doorstep with a penetrating pass for a 1-0 edge. The 6’3’’ center and Toronto native Pelech was uncovered for his fourth goal of the season and brushed the puck past Nailers netminder Alex D’Orio, who was folded up with his legs flailing as he attempted to dash to his left post and came up empty.

Indianapolis hockey has never been known for a great penalty kill as they rank 9th in the league with an 82% rate of stopping their opponents from scoring with the man advantage. However, Sunday was another story as Wheeling was provided with two five-on-three power-play chances in the first period alone and Indy took the air out of their sails by denying them and clearing the rubber out of the zone consistently without scoring damage.

Indy Fuel goaltender Dan Bakala came into the clash with a 12-2 record and only allowing two goals per game. He was steady and ready for any pucks blasted his way with a three-ring circus of kick saves to amuse the Circle City crowd on Family Fun Day. Reigning from Calgary, “Count” Bakala anchors the team and has them in contention every game with masterful glove saves and was outstanding as usual to keep the shutout alive until deep in the contest.

The second period would be much like the first as Indianapolis held its ground and continued to knock the Nailers around with hard-hitting checks and an aggressive offensive rush. Five minutes into the second stanza, Ontario native Mathew Thompson would assist to ring the bell again as he set up his teammate Diego Cuglietta in front of the goal. Cuglietta was the benefactor of a beautiful chip pass at the far summit of the crease, which was Thompson’s second assist of the game, as he lit the lamp with a clacker into the open nylon past a dizzy, cross-eyed Wheeling keeper for the seventh goal of his short career with the Fuel and a 2-0 lead.

The Fuel was coasting into the 3rd stage of the game with their eyes on the prize of a shutout, but the Nailers had endured enough and were set to make a comeback as they cut the margin in half at the 16:15 mark of the final period. Wheeling’s Patrick Watling picked up his 12th assist of the season as he launched a bullet shot from the face-off circle, which jumped off the leg pads of Indy goalie Bakala to a wide-open Michael Joly standing on the right post entryway.

Gastineau, Quebec native Joly at a mere 170 pounds belted the vulcanized disc into the back of the net past sprawling netminder Bakala for his third tally of the year and gave his team hope with plenty of time left. Fortunately, the Indy Fuel defense was well-balanced and kept the Nailer attackers at bay the rest of the way with plenty of stonewall support from their keeper Dan Bakala, who garnered 35 total saves to earn the first star of the game.

With three minutes remaining in the hockey throwdown on 38th Street, Indy defenseman Mike Lee almost iced the game when he rang a sizzling slapper off the post to the dismay of the home fans. Wheeling would pull their goalie Alex D’Orio with 1:40 left on the clock for a six-on-five player advantage and leave their net empty for the remainder of the skirmish.

Indy held their ground and put the cherry on top of the Sundae Funday when Antoine Waked chased down the puck in the neutral zone and skated past the blue line into the open ice with no goalie in sight. He was generous to donate the goal to his streaking teammate Diego Cuglietta with a pass into the empty scoring slot before a Wheeling defender threw his stick from afar and knocked the wide-open shot away. Wheeling was whistled for unsportsmanlike conduct with an empty net and the Indy Fuel were rewarded with the goal for a 3-1 hard-fought victory at home to improve their record to 10-2 over the Nailers and pick up their 22nd win of the campaign.