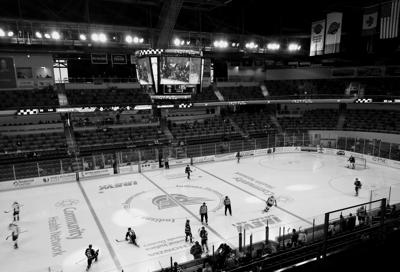 Hockey Heaven was back on 38th Street last night at the Indiana Farmers Coliseum as the Indy Fuel needed overtime to knock off the South Carolina Stingrays 2-1 in the sudden-death extra session of play. Indianapolis hockey came into this game, after losing six of their last seven overall and having lost three in a row at home for the first time all season.

It was a bounce-back night for the Fuel, and really nice to have their head coach Doug Christiansen back behind the bench after he served a six-game suspension for salary cap violations. Christiansen stirred things up on the roster this week by adding two young forwards to the growing organization with Tommy Apap, who just graduated from Michigan State University, and Brent Gates who played a big role in tonight’s outcome.

The first period was chippy from the start, with both teams taking penalties for slashing and tripping. But the penalty kill was on point, and no goals were scored in the early stages. The Indy Fuel have not become accustomed to outshooting their opponents in the first period this season. Still, they came out strong on Wednesday at their home hockey barn, winning the shot margin differential 11-6, and had a full tank of energy and momentum the rest of the way.

Indianapolis goalie Dan Bakala entered the contest with a 15-7 record and has only given up 2.5 goals per game coming in as the stalwart stopper for this hockey club. He always has his glove on the pulse of the team and steers the ship as the last line of defense. “Count” Bakala has balanced the teams’ rollercoaster play this season as their maestro goaltender and always keeps them in every game as a solid wall between the pipes.

This game would be no different as Calgary native Dan Bakala kept South Carolina off the scoring board for almost the first two periods of play. The Stingrays were doing a phenomenal job of creating havoc in front of the crease with net-front screens, traffic, and congestion to block the netminders’ vision of shots. Bakala made a series of scintillating kick saves in the first half of this game to kickstart his offensive unit.

Indianapolis hammered the attack zone with great offensive schemes and well-executed strategy to lead South Carolina 15-10 in shots on goal through the 10-minute mark of the second period. The Fuel just couldn’t get any scoring hops to fill up their empty mugs on National Beer Day at the Coliseum, where there was a variety of brew selections on tap for the crowd on hand.

The game would take a turn in the second period when Indy Captain Nic Pierog tried to clear Stingray defenders from the crease when his goalie covered up a dangerous, bouncing puck. “Pierogi” got his skates tangled up in a herd of players crashing the net and had his body waffle backward in awkward agony. The team leader in goals, Captain Nic, had to be helped off the ice and it would be a setback and uphill climb for Indianapolis to fight on without their skillful, vocal leader the rest of the game.

With 3:52 remaining in the 2nd period, South Carolina would sting first as 6’2’’ forward Mark Cooper would accept a perfect shuttle pass from defenseman Blake Hillman at the top of the near face-off circle. Cooper sent a net-seeking missile over the slightly elevated blocker of Bakala to sizzle the top left corner of the cage for his 6th goal of the season and a 1-0 lead.

The Fuel have been known for several comebacks in the final period of play this season and had a chance to tie it up early in the 3rd. With 16:34 left in the game, Indy Fuel forward Nick Hutchison, who had been physically aggressive all evening with South Carolina, drilled his man into the boards at the center red line, stole the rubber disk on a carom off the boards, and fed Assistant Captain Spencer Watson with a dandy, rocket pass out in front.

Watson had the 1-on-1 breakaway as he double deked South Carolina goalie Alex Dubeau into dropping down in the butterfly position and had the upper half of the goal left vacant for the score. Fuel forward Spencer Watson had Netminder Dubeau out of position and right where he wanted him but flipped the puck off the top of the crossbar and it headed out of play into the safety netting.

The Indy Fuel would face many penalties throughout the game but would stand up to the challenge with an efficient penalty kill and limited shot opportunities from the Stingrays. Indianapolis ranks 14th in the league with a 78% success rate at keeping their opponents off the board with the man advantage but would improve that score quite a bit during this battle.

The third period was growing old without a goal from the home team, Fuel being down 1-0. At the 6:45 mark of the third period, newly acquired Brent Gates from the Tulsa Oilers would earn his first start of the game and his first goal with the Indy Fuel organization. Gates received a gorgeous, precision pass that ricocheted off the blue line boards right to the tape of his twig and dragged the puck at the corner of the face-off circle onto his backhand at the summit of the crease with turbo skating.

The 6’2’’ forward, in his first game with the Fuel, lifted the biscuit into the basket just inside the near blue post to light the lamp and finally broke through the threshold of Stingrays Goalie Alex Dubeau’s defensive prowess in net to tie the game 1-1.

This game wouldn’t end without drama as it was all even after regulation time expired and headed into a seven-minute 4th period of 3-on-3 sudden death OT hockey. Only minutes into the extra session of suspense at 4:48 of overtime, Indy forward Nick Hutchison stickhandled the puck past the blue line with a blaze of speed, faked the defender Caleb Herbert into sliding by, and tucked the puck high into the right corner pocket of the net with a snapper just under the crossbar for the game-winner.

South Carolina goalkeeper Alex Dubeau (9-2 Record, 91% save percentage) was in perfect position hugging the far post, but couldn’t stop the pinpoint shot of Nick Hutchison rattling the cage and tickling the nylon for the loud crowd of Indianapolis hockey to rejoice with a 2-1 Overtime victory on home ice.