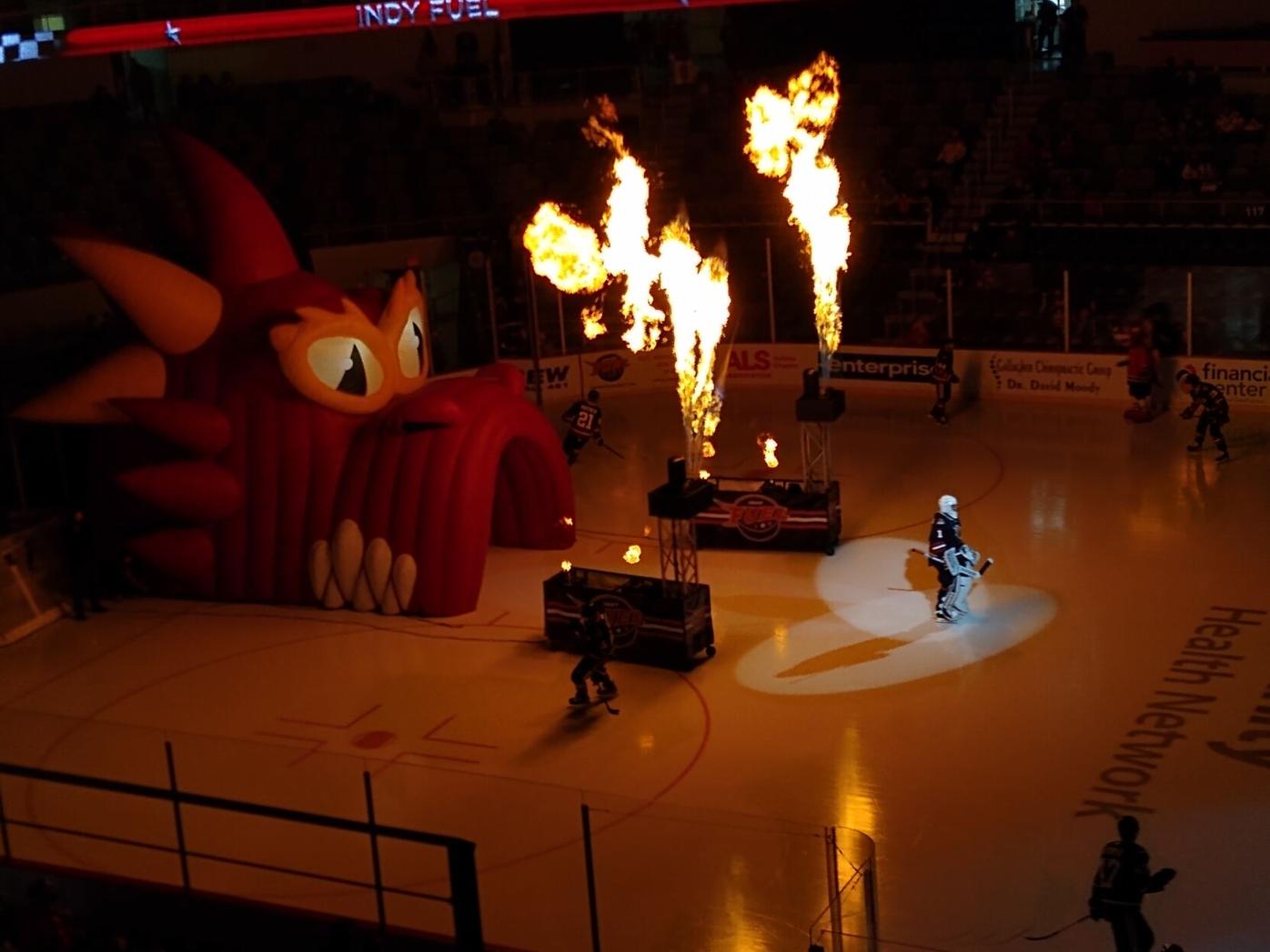 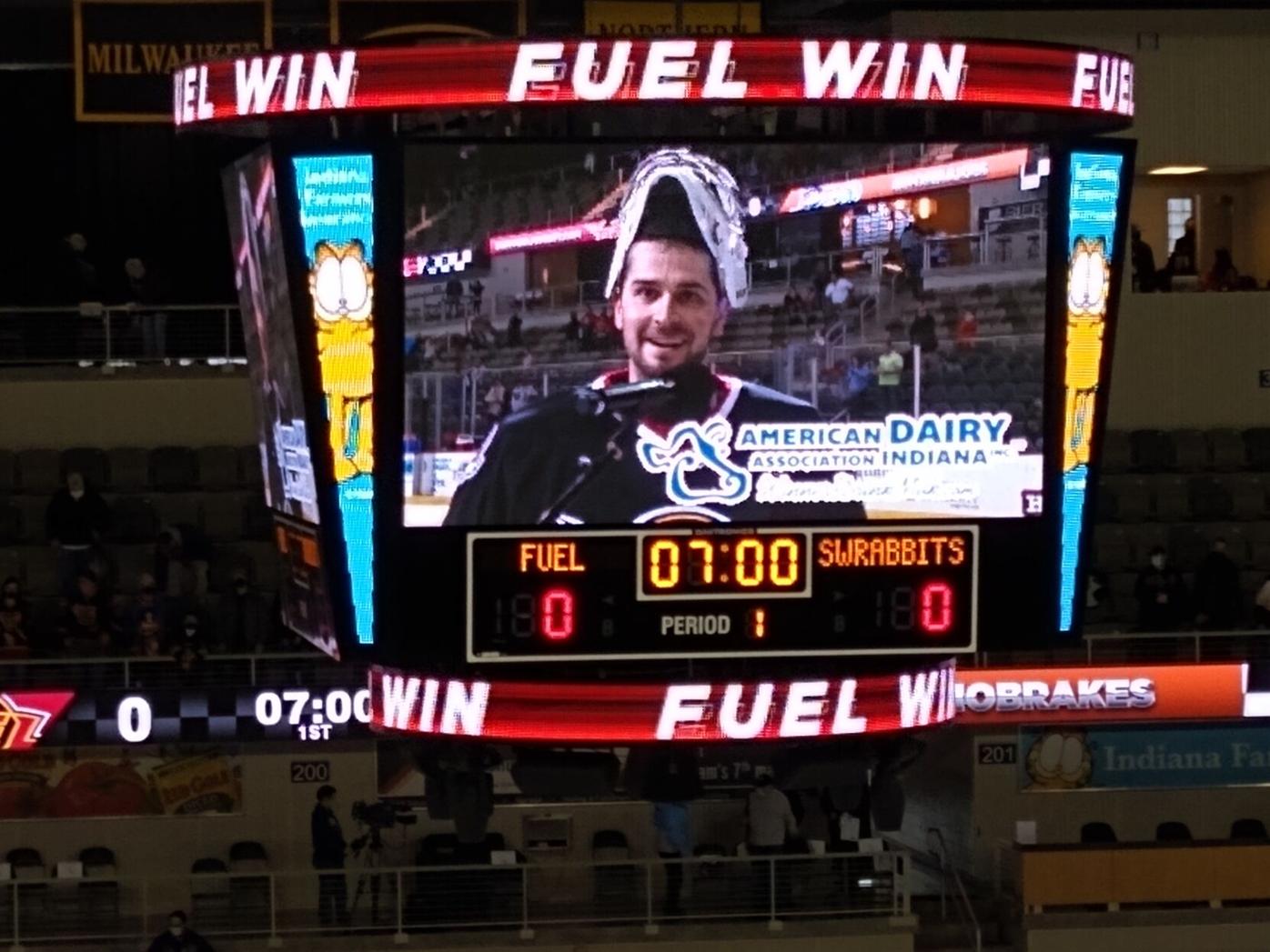 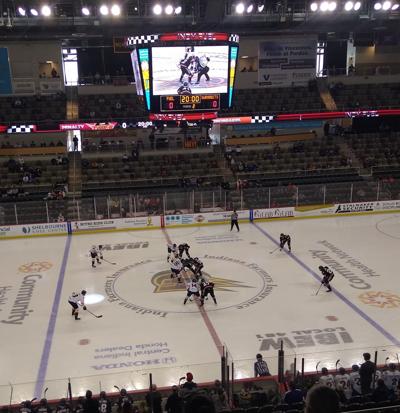 The Indy Fuel are the Double-A affiliate for the Chicago Blackhawks and have treated their loyal hockey fans to a wonderful winning record this season. There haven’t been many occasions when the Indianapolis faithful has left Indiana Farmers Coliseum with a sorrowful feeling.

Their home team hockey organization has inspired them with a strong 18-4 record sitting alone at the top of the standings in the Eastern Conference of the ECHL. Goaltending has been a true staple and cornerstone for Indy Fuel this season as they have put up a winning percentage of 80% and won seven of their last ten games. This past weekend was no different as their dynamic duo of goalies posted consecutive 4-0 shutouts over the Greenville Swamp Rabbits to cap the series on a high note. Saturday night featured starting goalie Dan Bakala taking center stage for Indy and putting on an East 38th Street showstopper in steering away 30 shots on goal from Greenville to right the ship.

The game theme was Wizard Night for the fans who attended, but Bakala would be the one to cast a spell on the Swamp Rabbits and was magical in net with acrobatic saves, and the pucks were seeing nothing but glove all game long. Indy Fuel’s sharpshooters were on the attack scoring 40% of their power plays and tallying 23 shots in the contest. Michael McNicholas lit the lamp five minutes into the game to give Indy a lead they would never relinquish.

Fuel Forward Alex Rauter would blaze a slapshot past Greenville goalie Ryan Bednard (9-4) to highlight a captivating three-goal period and add an empty netter with 21 seconds remaining in the game to send the fans home happy. Calgary native Dan Bakala would improve his remarkable record to 10-0-1 as Indy’s netminder standing on his head and making a scintillating behind-the-back save to blank the Rabbits.

A Sunday Matinee had the Fuel playing their 4th game in five days of a hectic schedule against Greenville to end the series. Starting between the pipes was Raleigh native Billy Christopoulos for Indy in a backup goalie role for the 1st place Fuel. Billy was an outstanding keeper at the Air Force Academy, having 42 victories in four years before Indianapolis acquired him from Toledo last year, where he won 23 games for the Walleye.

Christopoulos was a stonewall savior early on in this battle as Greenville was bombarding him with shots near the crease, and the Fuel got off to a slow start having only seven shots on goal through the first 25 minutes of the game.

Fortunately, Billy “The Squid” stood strong and kept the Swamp Rabbit attackers at bay long enough for Indy sniper Michael McNicholas to open the scoring gates midway through the 2nd period with a twisted wrister past Greenville goalie Jacob Ingham. Diego Cuglietta, who was making his debut for the Indy Fuel after being newly acquired from the Utah Grizzlies, would follow the trend with 2 goals and assist in matching his total stats with his former team all season.

Cuglietta beat the Greenville netkeeper like a drum with two top-shelf missiles over his right shoulder to put the game on ice and Cedric Lacroix would add an empty netter scorching out of the penalty box to put the biscuit in the basket.

Billy Christopoulos was a commanding force in net for Indianapolis, blocking 27 shots and denying Greenville on all seven power-play chances to give the Fuel their first back-to-back shutout wins in franchise history.  The Indy Fuel are off to their best start since arriving here in 2014, and they are definitely a thrilling team to watch in the Circle City with seven overtime wins plus a shootout victory thus far. The organization is rising to the occasion to offer an amazing experience every time the fans fill the stands in this terrific hockey haven!