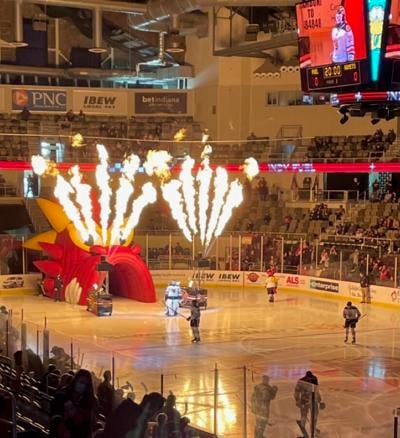 It was a great hockey clash displayed at the Coliseum on Wednesday night as Ft. Wayne finished strong in the third period with four unanswered goals to knock off the Indy Fuel 6-3.

Indy had come home to play at the Indiana Farmers Coliseum for the first time in 17 days as the NCAA Tourney forced them to battle on the road in their last seven contests. They had come out pretty even with a 3-3-1 record on their road swing and finally had some home cooking as they took on their evil enemy Ft. Wayne for the fourth time in the last six days. Indy came into this in-state war on a high note as they finished the weekend series with a 3-2 win over the Komets at the War Memorial Coliseum on Sunday afternoon.

The Fuel was happy to return to their home territory and would rev their engines early on in this game by scoring at the 9:50 mark of the first period. Indy was forechecking with great pressure in the Komets' defensive end with hard hits and kept the puck deep in the scoring zone.

The Fuel’s player of the month, Matt Marcinew stole a deflected puck in the far face-off circle and transferred it smoothly from his backhand to his forehand at the summit of the crease before he slipped the rubber disk between the leg pads of Komets goalie Dylan Ferguson. Marcinew tallied his 15th goal of the season by placing it five-hole on Ferguson, who had a 2-0 record coming in this season and gave up less than a goal per game on average with a shutout to his name for Ft. Wayne.

The Fuel lead wouldn’t last long when three minutes later with 6:54 left in the first, Komets forward Brandon Hawkins took a cross-ice pass from captain A.J. Jenks and capitalized on their power play with a heavy wrist shot that ripped the net behind Fuel goalie Dan Bakala’s trapper to tie it up at 1 apiece. Fort Wayne came into the game leading the league with a 27% success rate when they have the man advantage, power-play opportunity.

The second period of play got off to a bang when only a minute in, Ft. Wayne forward Anthony Nellis gathered the puck as he looped around the face-off circle into a clear high slot and unleashed a mighty slapper that ricocheted off “Count” Bakala’s goalie pads.

The juicy rebound popped out to the edge of the crease, where Brandon Hawkins was there again to deposit the biscuit into an empty basket for a Komet’s 2-1 advantage.

However, Indy wouldn't be shown up at their own arena when 15 seconds later, at the 18:56 mark of the second stanza, the Fuel would strike back when defenseman Mike Lee hammered a snapshot that was kicked aside by Komets goalie Dylan Ferguson.

The evasive rebound was directed right onto the stick of Fuel veteran Michael Pelech waiting on the weak side doorstep to poke it home with a backhand flip for his second goal of the campaign and made it a 2-2 score. Pelech also has 16 assists on the season and is only two assists away from approaching 3rd place on the ECHL all-time assists list.

The scoring window for Indianapolis wasn’t closed quite yet as they aimed to take the lead with four minutes remaining in the 2nd period. At 6’2’’ and 200 pounds, Indy Fuel forward Jared Thomas came flying over the blue line and floated a flying saucer shot past the stick side of Komets' netminder Ferguson to beat him like a drum with his own Ft. Wayne defender Nick Boka obstructing the keepers’ abilities by sliding into the net along with the puck.

Fuel goalkeeper Dan Bakala had a 15-5 record coming into this game and would hold off the Komet’s late surge when he baffled a breakaway shot by 6’6’’ Komets forward Justin Vaive as he collapsed his pads to stop the rubber and stifled Ft. Wayne’s chance of tying it up as the 2nd period came to a close.

The Fuel was flying high going into the final period with all the momentum, but their I-69 rival had other goals in mind, down 3-2 with 20 minutes to play. Ten minutes into the concluding period, Ft. Wayne was doubling up the Fuel in shots on goal with a 34-17 advantage with nothing to show for it except being down a goal in the contest.

Unfortunately, Indy wouldn’t come out of the locker room ready to finish the game, and the scoring gates were about to open wide the rest of the way for the Northeast Indiana villains. At the 9:57 mark of the 3rd period, Komets forward Brandon Hawkins blasted a twisted wrister from the congested high slot, which would clank off the far post and enter the cage for his 12th goal of the season and an impressive hat trick to notch the game at three. Just a minute later, Fort Wayne was far from being done with inflicting scoring punishment when their recently arriving forward Morgan Adams-Moisan glided into the attack zone off a dime pass from Marcus McIvor and struck a clapper goal past Indy Goalie Bakala’s blocker to capture a 4-3 lead and turn the tide late in the game.

The Indy Fuel had a few scoring chances down the stretch but couldn’t close the gap as Ft. Wayne would put the game on ice with a minute remaining. As if I haven’t mentioned his name enough, Ft. Wayne’s showstopper Brandon Hawkins had the goods again with 69 seconds left in the game to tally his 4th goal of the game when he stick-handled the puck from behind Indy’s goal. A mighty 5’10’’ Hawkins took his time and fired a precise shot just underneath the crossbar from the right corner of the crease over the shoulder of abandoned Indy netminder Bakala covering the angle as best as he could.

The flying Komets would seal the deal with an astounding fourth goal of the period on a long-distance meteor shot from their own defensive zone into Indy’s empty net on the other side of the frosty galaxy to finish on a high note with a 6-3 victory away from home and their sixth win out of nine games overall in 2021 against their in-state nemesis Indy Fuel.