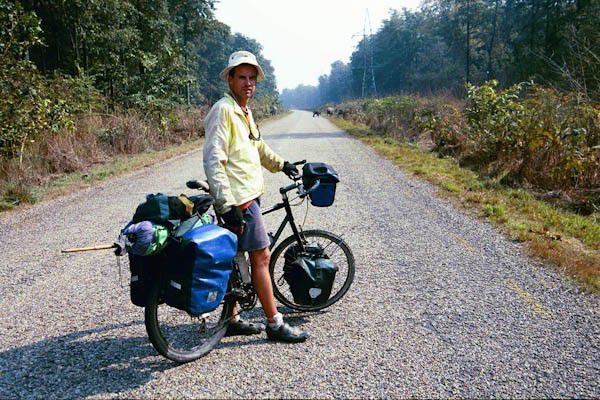 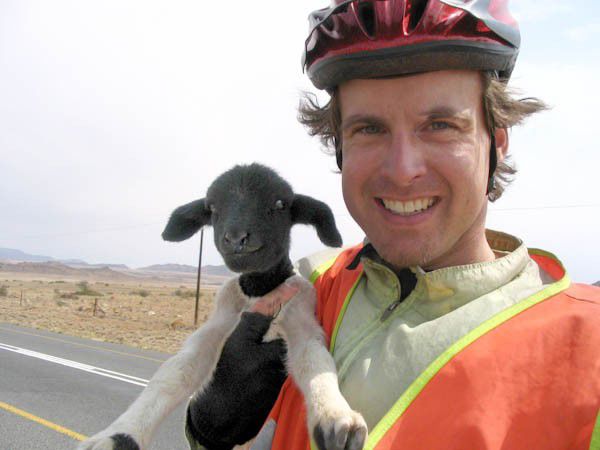 Scott Stoll in South Africa on his biking adventure.

Scott Stoll in South Africa on his biking adventure.

Next Wednesday, Scott Stoll, whose trip around the world lasted four years and found

him pedaling through 50 countries and six continents, will kick off a speaker's series

at the Central Library featuring those who have traveled the world by bike. Presented

by the Central Indiana Bicycle Association and The Indianapolis Public Library, the

series will bring in, on the third Wednesday of each month, people who have visited

Myanamar, Cairo and Sicily, among other points of call. Stoll's book Falling

tells of his trek, which he embarked on after losing a job, girlfriend and best

NUVO: So if you're trying to do vacation therapy on a bike, you really have to measure

out the baggage you want to lug around.

Scott Stoll: Well, yeah, both literally and figuratively! You have to travel very light and

throw it away. And when you're on a journey like that one, which in many ways still

continues for me, you have to throw away that mental baggage, all that stuff that, in my

case, was weighing me down more than the other 50 pounds of water and food and a

NUVO: How does the journey continue for you? Do you still travel quite a bit?

Stoll: Not as much as I'd like to. I've learned to find adventures in everyday life. One

of my proudest accomplishments, which shows how the trip keeps growing as I tell

Cultural Ambassador to Argentina with the U.S. Department of State. I got to go down

there and tell my story to several thousand elementary and middle school students, and

the world, Falling Uphill. That it relates to what I call the "boon" of people's travel. For

me, coming home was a culture shock much bigger than leaving. When I left, I felt like

I didn't have a choice, but when I came back I had to question who I was, how do I fit

back in - and what do I owe to my community?

NUVO: Biking is one way to find adventure in everyday life, to see your immediate

surroundings in a new way.

Stoll: Of course I think so. And I believe that it just gives you a real, tangible

understanding of how the world works and what happens. When you're in a car, you're

kind of looking at a television set at the world outside of you; with the music and air

conditioning, you're not really aware of the weather or the seasons, you can't really

say hello to people. When I was in San Francisco - I'm now in Milwaukee - I used

to like to ride my bike down a new road every day, and I felt like I was sculpting the

topography of San Francisco on my bicycle. And it's just an invitation: When you're

traveling and you've got all that stuff on your bike, people want to find out about it. It's a

NUVO: You talk about muggings and the like. Did you often find yourself in dangerous

Stoll: The world was really a lot safer than I thought it was and, in a way, America was

one of the more dangerous countries, especially in terms of being a bicyclist. I did get

myself in trouble running out of water in the Baja. I started hallucinating and realized

that I didn't have long to live. The temperature was over 120 degrees Fahrenheit, and I

miscalculated how much water I was going to need to make it through the night.

NUVO: And you could have carried a phone at that point.

Stoll: Yeah, even now there's just no way you would have a cell phone signal when you

really need one. They have satellite phones, I suppose, but I've discovered that by the

time you realize you're in trouble, you don't have a lot of time to wait for help. People

say, "Did you bring a gun with you?" but by the time you get your gun out and figure

out you're in trouble, it would have been too late.

NUVO: So how'd you get out of the Baja?

Stoll: I was sitting in a dried-out river bed that had been flowing, due to a hurricane, a

few weeks before that. And I was thinking, you're supposed to dig a hole in the river

bed and drain the sand through a dirty sock. But again it's just too late; you can't exert

that much effort and risk not finding anything. So I knew there was a military base 10

kilometers away. So I just got on my bike and kept going. There was no shade, and it

was painful even to sit on the rocks. Luckily, I found the military base, but it was a bit

of a risk; there were no houses, no one on the road at that time of the day. Not even the

truck drivers will drive on the road at that time of day.

And the payoff of that story is that I went out on a mission. I wasn't a hero, I didn't do

it because I had this amazing gumption; I just felt like I had no choice, and this was my

last-ditch effort to find happiness or faith or whatever description you want to use. And

then I realized happiness is sometimes a cold glass of water.