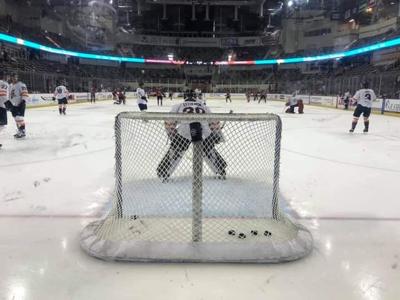 The Indy Fuel were seeking their first playoff win in franchise history on Tuesday at the Indiana Farmers Coliseum, but fell short with a 2-0 loss to Greenville in game one of the Playoff Series.

The opening round of the Kelly Cup Playoffs features a three out of five series in which the first and last game of the series is played in Indianapolis, while games #2, #3, and #4 will be hosted by the Rascally Rabbits back in Greenville. This was the first playoff game for Indianapolis since the 2018 post-season when the Fuel lost to Toledo in four games.

Greenville is no stranger to success on the road with a 19-9 record when playing away from home, and Indianapolis was 19-12 while protecting their home territory. Having the next three games played in South Carolina and only having to win three games to advance to the second round, this initial playoff game in Indianapolis was a must-win and put a lot of pressure on the home team to hold serve and take their chances going on the road for a trio of challenges.

The Coliseum was an electric ice box Tuesday night, and this was the first time all season Indianapolis was allowed to pack the house and have full capacity in the stands while the roaring faithful waved their white rally towels and got rowdy for a 38th street thriller in the opening act of this hockey series.

Greenville had a secret weapon in Ryan Bednard playing goalie for them from Macomb, Michigan, with a stunning 20-6 record, four shutouts to his name, and only allowing 2.5 goals per game. Netminder Bednard has given the Indy Fuel fits in the past and has been a thorn in their side by making outstanding saves and seemingly being everywhere with great positioning while flashing a swift glove. Billy Christopoulos, who played at the Air Force Academy from 2015-2019, would fill the crease as the Keeper for Indianapolis with a .914 save percentage. He finished the regular season on such a high note at home with two statement wins against Fort Wayne and received the nod to open this critical series against the Rabbits.

The first period started with a flurry as both teams tried to make an impact and throw their bodies around with hard-hitting checks and physicality. It was a back and forth tug-of-war to see which squad would be the aggressor early on and who could stay out of the penalty box. Indianapolis was surprisingly sound on the penalty kill as they ranked a lowly 12th in the ECHL with an 81% success rate, but held Greenville scoreless and in check through the first half of the game.

The second period began where the first left off with aggressive play as the game was loaded with fast-paced, collision checks where both teams couldn’t get off the tracks to avoid punishment. Midway through the game, Indy led Greenville with a 15-12 edge in shots on goal. The second stanza would test Greenville’s defensive grit when they committed two penalties of Cross-Checking and Holding at the nine-minute mark to hand Indianapolis a five-on-three man advantage.

Indiana’s capital city has done well to capitalize on these sizable power plays all season with an 18% scoring rate and ranking third in the league in success while the other team sits in the penalty box. However, the Swamp Rabbits were too quick to allow any dangerous scoring chances and reversed the momentum soon thereafter. At the 5:13 mark of the second period, Greenville was amping up the pressure with a solid forechecking presence and lucked out in a big way. Swamp Rabbit Forward Anthony Rinaldi skated into the attack zone after his teammate Matt Bradley dumped the puck deep to the far face-off circle. Rinaldi caught up to the play and took a swat at the rubber disc off of an Indy Fuel defender’s stick, which made the puck flutter rapidly right over Fuel Goalie Christopoulos’ blocker pad and into the cage for the 1-0 lead and taking some of the air out of the home arena.

The final period of play had set the stage to see who would take a commanding lead in this first to three-game series to advance in the Kelly Cup Playoffs. The Swamp Rabbits came bursting out of the locker room with the carrot juice to ignite their offense. With 17:34 remaining in regulation,  Greenville Forward Joey Haddad streaked into the low slot after retrieving a juicy rebound and shot a low line-drive into the open left half of the goal. Indy Fuel Stopper Billy “The Squid” Christopoulos made a remarkable save by kicking his right leg out and barely keeping it a one-goal game by steering the puck aside with the edge of his skate blade.

However, a few minutes later at 15:17, Greenville was back on the attack when Winger Shawn Cameron showed off his speed with some cherry-picking through the neutral zone. Rabbits Defenseman Alec Rauhauser, who had been laying the wood with stout body checks, sent a dime pass off the sideboards to Cameron transferring the puck to his forehand side and floating the puck over Christopoulos’ glove into the top corner of the nylon for the two goal margin and eventual outcome.

Indianapolis had a fierce and festive crowd arrive at the Coliseum for this June playoff series, but weren’t able to erupt the way they desired for the first playoff win in franchise history. The hometown heroes struggled to put the biscuit in the basket, although they did dominate the action with a 37-22 shots on goal difference and couldn’t quite light the lamp with multiple power play opportunities.

The Fuel will have to challenge Greenville on the road over the next three games and be forced to win two out of three for the reward of another shot at playing in front of their loyal fans next Monday in the deciding game five of the Kelly Cup Playoff Series if necessary. The Fairgrounds hockey barn was filled with enthusiastic energy again and the season may be far from over with Indianapolis in a difficult spot and eager to rev their engines into South Carolina for game two.