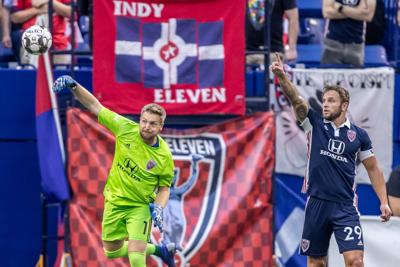 The Boys in Blue are taking to the field at Lucas Stadium on July 11 for the 2020 season opener, with kickoff set for 7:00 p.m. While seating inside the stadium for the USL soccer game will be limited, every fan can follow action on WISH-TV and MyINDY-TV 23 (WNDY), according to John Koluder, senior director, communications and marketing.

Koluder added, “What we want NUVO readers to know is: The last four months have been anything but a vacation, both for the team and the club. A lot of hard work has been put in by the players and coaches to stay sharp physically and mentally for the eventual return of games, and we believe that will be shown when we take the field against Saint Louis on Saturday night.

Much has been done off the field, as well as on, to prepare for the games, as well as the fans.

"Lots of scenarios were chewed on by the USL Championship and its Board of Governors, and we are thrilled that the scenario they landed on includes having fans in the stands starting Saturday night,” said Koluder.

Acknowledging that many fans might not want to attend games in-person right now because of COVID-19, Koluder passed along the team's hope that fans will be watching WISH-TV or MyINDY-TV 23 and they’ll be active on social media to keep the spirit around the club high.”

He also said that for fans that attend on Saturday night, or any other game in the future, their aim is simple — “to make Lucas Oil Stadium the safest place in Indiana outside of their homes, which would mean the incredibly thorough Health and Safety Plan we’re putting into place is a successful one.”

“In this unique climate for sports it is more important than ever to work with a quality local broadcast partner in getting games on the air. Our close relationship with WISH-TV and My INDY-TV 23 will continue to make this happen and provide the benchmark for USL Championship television broadcasts,” said Greg Stremlaw, Indy Eleven Chief Executive Officer, in an email to NUVO. “With WISH’s increased reach throughout the state, we are excited to partner in bringing increased coverage of the Eleven to more fans across Indiana in 2020.”

The 2020 season marks Indy Eleven’s seventh year of play overall and third season in the United Soccer League Championship, a 35-team professional soccer league based across the United States.

Koluder confirmed the return of the on-air duo of play-by-play man Greg Rakestraw and color analyst Brad Hauter for a seventh season in the broadcast booth. The Honda Post-game Show, a wrap up of the evening’s action featuring extensive highlights and interviews with personalities from both teams, again follows the two-hour game window.