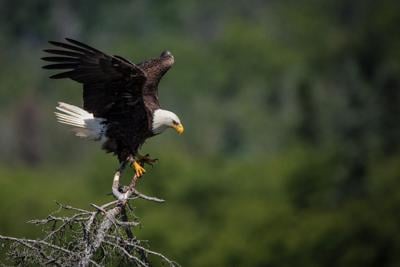 The last native eaglet documented to have hatched in Indiana was in 1897. By 1900, bald eagles were extirpated in Indiana due to the loss of wetland habitats. To bring the eagle back, the Indiana Nongame & Endangered Wildlife Program started the Bald Eagle Reintroduction Program.

You can see the results of this program for yourself, on your home computer, on January 2.

That is because Patoka Lake State Park, located just south of the historic towns of French Lick and West Baden, and just east of historic Jasper, is hosting its 33rd annual Eagle Watch from 10 a.m. to 2 p.m., as a Facebook live event.

It’s a different configuration from the usual on-site day-long expedition by Indiana DNR staff, but you’ll still get “a tour” around the eagle nesting sites and learn the history of this site’s resident, non-releasable bald eagles.

“There will be a short program offered [at the top of] every hour,” said spokesperson Dana Recklehoff in a news release. “Topics will include Indiana’s bald eagle reintroduction program, Patoka Lake eagles facts, bald eagle trivia, eagles then and now, and the story of how bald eagles prevented a theme park on Tillery Hill.

"For each live segment that viewers “like” or comment on, they will be entered into a drawing for a state parks annual entrance pass,” said Reckelhoff.

In 1782 the bald eagle was designated as the U.S. national symbol, "representing strength, courage, and freedom." Ultimately, that boast did not protect eagles from nationwide habitat loss, over-hunting, and the pesticide DDT,  not banned until 1972.

In 1978 the bald eagle, the USA symbol of its seeming selfhood, officially was listed as endangered Now, the bald eagle is recognized as well as a symbol of survival from the brink of a total loss.

Along with Patoka Lake as a secure habitat, we also can experience at close range the life cycle of bald eagles at Turkey Run State Park near Marshall; Salamonie Lake, near Andrews; Mississinewa Lake, near Peru; Sugar Creek and Wabash River in Parke County; and Lake Monroe, near Bloomington.

The large turkey vulture, originally put forward by Benjamin Franklin to become our national bird, can be easily confused with the bald eagle. It takes a closer look to spot the marked difference; the white head plumage specific to the bald eagle.

Nationally acclaimed bird author Pete Dunn reminds us the bald eagle “is the bird on the back of the one-dollar bill with the olive branch one talon and the arrows in the other.”

But you might catch a glimpse of Indiana’s state bird right outside your window.

The cardinal (Richmondena cardinalis cardinalis) was adopted as Indiana’s state bird by the 1933 General Assembly (Indiana Code 1-2-8). The male is bright red; the female is brown with a dull red crest, wings, and tail. They live nearby year-round, and nest in thickets of brambles or low saplings. In winter they pose splendidly on a snow-dusted bare branch and among evergreens.

The late Alfred (Bud) Starling, still known as Indiana’s leading birder, begins his iconic Enjoying Indiana Birds, published by Indiana University Press, 1978, with the invitation to start in January to get acquainted with our local birds.

There’s a bit of eeriness in Starling’s observation, “Birding in January offers the opportunity to know in depth the birds of an area. The deciduous trees are without leaves, making it easier to see birds, the woods are quiet, few people are about, and there is a still sereneness throughout the landscape …”