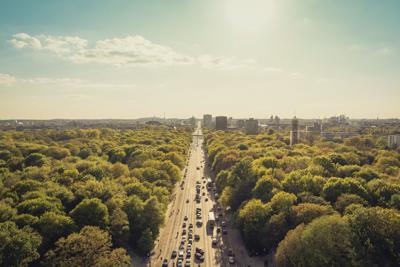 Every day, Indianapolis residents pass by many of the most cost-effective tools the city has to perform a variety of crucial and expensive functions - trees.

Land development, especially in environmentally sensitive areas around the city, threatens to reduce the number of urban forests and potentially shift the cost of their functions to Indianapolis and Marion County residents.

The Indiana Forest Alliance is urging Indianapolis officials to take action to protect the city’s urban forests and has presented them with a strategy to best establish those protections.

“If we clear them, we're going to lose their benefits, and we're going to pay for their loss,” said Indiana Forest Alliance executive director Jeff Stant. “Every month, every quarter in Indianapolis, more of this forest base is being clear cut, removed and chipped away at. What we're trying to do with this project is to get out in front of that in a proactive way and develop strategies for conserving the most important of these tracts and forests in an equitable way across the city.”

According to the IFA, nearly 15% of Marion County, or about 59 square miles, is forested. Only 9 square miles of that forested land is within city property and thus under its protection.

The remaining 50 square miles of forested land, including 4,237 urban forests larger than an acre, are privately owned and have little if any, protection from being cut down, degraded, or destroyed by development.

According to a Tree Management Plan commissioned by the Indianapolis Department of Public Works, the city’s 9 square miles of trees provide nearly $10 million in annual benefits to the city, averaging about $54.54 in annual benefits per tree. Among those benefits:

• The aesthetic qualities of trees increase property values by $26.44 a year, leading to $4.8 million in benefits to the city.

• The shade from tree cover reduces the amount of electricity used by air conditioners in the summer and diverts wind in the winter to reduce natural gas costs, leading to an annual savings of about $1.3 million in energy consumption for the city.

• They also suck up more air pollutants than they emit and sequester carbon dioxide, leading to a net gain of about $500,000 in benefits.

Privately owned trees could be providing similar benefits to Hoosiers around the city. The IFA calculated the remaining 50 square miles of unprotected forests, about 4.7 million trees, are providing nearly $258 million in similar benefits.

“Every month, there are proposals approved by the Metropolitan Development Commission or the Boards of Zoning Appeals under the commission, that are allowing for developments in what the comprehensive plan of the city says are environmentally sensitive areas,” Stant said.

The Metropolitan Development Commission and the Indianapolis City-County Council approved the development of 16 acres of woods in Nora for the development of a mixed-use office, retail and restaurant space. Local residents and the IFA sued to stop the development, but trees were cleared before a judge nullified the project’s approval in 2020.

Urban forests of varying sizes have also been cleared due to development near Crooked Creek, Eagle Creek, and other locations throughout the city and county.

Stant said the developments are allowed to happen despite the city-county comprehensive land-use plan saying those environmentally sensitive areas should be protected. The plan allows the addition of overlays, or special land use zones, that could provide special protections to high-quality woodlands, wetlands, or other natural resources “that should be protected.”

“What you find, if you look at most plans that the city has produced in the last decade, is a consensus that these forests are important to conserve. What's missing is the will to implement these plans to conserve the forests,” Stant said.

The IFA hopes that presenting a clear strategy for protecting urban forests may make the task more viable for elected officials.

The IFA, along with the national Conservation Fund environmental organization, performed an inventory of the city’s urban forests and identified eight conservation strategies that would work best to protect them, including expanding the number of protected lands and trees, establishing riparian waterway buffers, and wildlife habitat protection areas, and exploiting the carbon offset revenue potential.

The organization also identified potential sources of funding to accomplish urban forest preservation, like applying for grants from the federal Land and Water Conservation Fund and other state and federal grants.

Stant said the IFA has spoken to Mayor Joe Hogsett and about half of the city’s 25 city-county councilors, many of whom favor the city having some role in acquiring forests to protect them.

“We know that the conservation of urban forests should be a priority to ensure that Indianapolis remains an attractive place to live, work, and play,” Hogsett said in a press release. “This plan will boost our collaboration with dedicated community partners to improve local planning and enhance equitable access to forests across our neighborhoods.”

"We must stop thinking of forests and cities as an 'either/or' proposition and embrace the reality that forests, great or small, are vital to the health of Indianapolis and its residents,” he said.

The IFA will present the forest inventory and strategies to the city-county council’s new Environmental Sustainability Committee on Feb. 28.

Stant said Hoosiers should reach out to their council members and elected officials to encourage them to preserve their own local urban forests.

Lawrence Township schools are getting ready to clear cut 20 acres of trees immediately north of the school that they bought from camp Belzer in order to pace it over with plastic grass for soccer and baseball fields, parking lots and high intensity LED lights. It's outrageous, with flooding and loss of habitat all around.