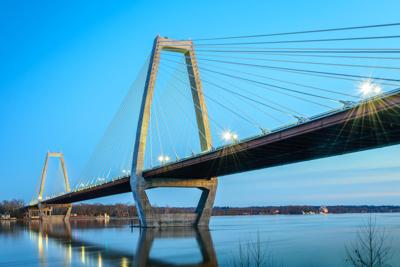 Despite opposition from all but two of Indiana’s elected officials in the U.S. Congress, more than $7 billion in federal infrastructure funding will soon become available to the state of Indiana.

The funding could allow the state to revolutionize the roadways that makeup the Crossroads of America, or, at the very least, to become more resilient to expensive damages caused by climate change effects like extreme heat and heavier rainfall events.

Indiana’s cut from the bipartisan $1.2 trillion Infrastructure Investment and Jobs Act will be about $6.6 billion in federal funding for state and local projects and $401 million for bridge replacement and repairs.

In addition to the money solely dedicated to the state, Indiana projects can also compete for a portion of the bill’s $12.5 billion for economically significant bridges and $16 billion for major projects that provide “substantial economic benefits” to communities.

All of the Republicans elected to represent the state in the U.S. Congress, including Sens. Mike Braun and Todd Young, voted against the funding. Only Reps. Frank Mrvan and Andre Caron, representing Indiana’s 1st and 7th Congressional districts, representing northwest Indiana and Indianapolis, respectively, voted in favor of the bill.

The funding will allow the state to repair and upgrade the 1,111 structurally deficient bridges in the state and the 5,478 miles of highway rated as “poor,” according to the U.S. Department of Transportation, in order to make those and other roadways more resilient to climate change effects.

Climate change is already affecting the state of Indiana.

Since 1895, the statewide annual average temperature has risen 1.2 degrees Fahrenheit, or about 0.1 degrees hotter every decade. The hotter temperatures have made roads more susceptible to rutting, cracking and buckling and have added stress to joints and materials in bridges. Those damages that shorten the lifespan of infrastructure and cost taxpayer dollars to repair or replace.

The state is also experiencing 5.6 inches more rain and snow each year than it did a century ago. More rain is falling in heavier downpours, increasing the risk of flooding and water pollution. The increased flooding makes roadways inaccessible, deteriorates soil that supports roadways and weakens bridge supports.

Those and other climate change effects are expected to drive up the price and amount of road repairs required every year to $20 billion annually by 2090 and $1.4 billion annually for bridge repairs by 2050.

Designing and building infrastructure in a way that accounts for climate change impacts, a strategy known as climate resilience, could help federal, state and local governments save money and lives and improve air quality by reducing greenhouse gas emissions.

“Protecting our nation’s highway infrastructure is a priority for the Department of Transportation and its Federal Highway Administration. The Department is committed to increasing its effectiveness in ensuring that infrastructure is resilient enough to withstand climate change and extreme weather events that could otherwise disrupt the transportation network and require major reconstruction,” wrote Philip McNamara, USDOT assistant secretary for administration.

USDOT said it had several programs underway to help state departments of transportation integrate climate resilience into its programs and projects, including several that just received additional funding, like the RAISE and INFRA grant programs.

Project proposals for both programs will have to incorporate climate resilience. In 2021, only one Indiana project was approved for a RAISE grant, $17.8 million for a 20-mile stretch of the Marquette Greenway, a 60-mile trail stretching through northwest Indiana from Chicago to New Buffalo, Michigan.

The state was selected as a finalist for a $70 million INFRA grant for the construction of the Clear Path 465 project, an expansion of the Interstate-465/I-69 system interchange slated to begin construction in 2022.

The Indiana Department of Transportation said the new infrastructure funding would grow incrementally over the next five years.

“INDOT plans its capital construction program over a seven-year timeline. The agency’s vision for leveraging the additional federal infrastructure funding would be to accelerate projects within that seven-year timeline and/or moving projects that may fall just outside of that timeline into the seven-year plan,” said Scott Manning, INDOT deputy chief of staff in an email.

Projects that could receive a portion of the new funding include the I-69 Ohio River Crossing, a planned bridge connecting I-69 in Kentucky and Indiana; the Mid-states Corridor, a four lane road from the Ohio River at Rockport to I-69 in Bloomington or another city along the interstate; the Sherman Minton Bridge renewal project between Louisville, Kentucky and New Albany, Indiana; and various other projects along I-69 or I-65.

The projects are all traditional designs that emphasize motorized transportation, a primary emitter of greenhouse gases. According to the U.S. Environmental Protection Agency, the transportation sector accounts for 29% of U.S. greenhouse gas emissions due to cars, trucks, ships, train and planes all mostly running from the combustion of fossil fuels like gasoline and diesel.

Climate change effects could be less drastic than projected if the country reduces or eliminates its use of fossil fuels.

Buttigieg, who formerly served as mayor of South Bend, said that he used live a mile from his office and drove to work every day.

“The built environment, the design of our infrastructure shapes our choices,” Buttigieg said. “If I were in Chicago or Oxford, it would not have occurred to me to drive. And yet that very same distance is one where it might not have occurred to one to walk, simply because of the design, the culture, the perception of safety, the reality of safety. So, as I started to form the habit of biking to work a lot across that mile, I began to really think about the choices we make and how it can create an environment again, both in terms of the perception and the actual mechanics, that affect choices.”

Buttigieg said the new infrastructure funding could result in a transformational investment if local governments choose to pursue infrastructure projects that support electric vehicles, increased rail use and other climate-friendly measures.

The Biden administration will release guidance on how to tap into infrastructure money in the next 90 days.