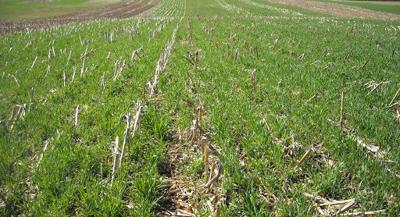 Linda Prokopy is the director Indiana Water Resources Research Center and a professor of Natural Resources Social Science at Purdue, and — similar to my last interview with Joshua Gruver — Prokopy studies what makes midwestern farmers adopt (or ignore) more environmentally friendly practices. Unlike Gruver, Prokopy is very much focused on promoting environmentally friendly practices at scale. Indiana is 65% farmland, with an average farm consisting of 264 acres. So while I’m personally a proponent of small, local farms, I’m increasingly recognizing that even a small shift in industrial-scale farming practices would have a profound impact on water quality, soil-health, and biodiversity throughout the state and region.

BEN VALENTINE: I think it’s fair to say most NUVO readers are urban dwellers. What are the environmental and the human health risks associated with large scale agriculture in Indiana, and do those effects stop at the city limit?

LINDA PROKOPY: The environmental risks from large scale row crop agriculture are primarily related to water quality, biodiversity, and climate change impacts. In terms of water quality, fertilizer and manure runoff (containing nitrogen and phosphorus) cause downstream issues. Most of Indiana land ultimately drains into the Mississippi River (through the Wabash and Ohio Rivers) – the Mississippi River ends at the Gulf of Mexico where the nutrients from the Midwest have created a large hypoxic, or dead, zone. Basically, the nutrients (nitrogen in this case) cause excess algae growth which ultimately removes oxygen from the water which creates an area where life (fish, shrimp, etc.) cannot survive. The size of the hypoxic zone varies every year but, on average, is bigger than the state of Connecticut. A portion of the Northeastern part of Indiana drains to Lake Erie where excess phosphorus led to a hypoxic zone a few years ago that created unsafe drinking water for the City of Toledo. Excess nitrogen in drinking water can be a serious health risk (e.g. blue baby syndrome) but since most drinking water in Indiana comes from deep groundwater aquifers, this isn’t as much of a threat as it is in other states that depend on surface water or shallow wells.

In terms of climate change, agriculture contributes to greenhouse gas emissions but also has the potential to sequester (store) carbon in the soil. There are many ongoing efforts to incentivize farming practices like no-till and planting cover crops over the winter that help to sequester carbon.

VALENTINE: Many farmers say these risks are necessary to “feed the world,” as they claim, is that true?

PROKOPY: The myth that farmers in the Midwest “feed the world” is extremely damaging. Many agricultural organizations, and even some land grant universities (although thankfully not Purdue!), promote this mantra. In our interviews with farmers about why they don’t adopt conservation practices that help reduce environmental risks, they often tell us it’s because they have an obligation to “feed the world” and can’t afford to take some land out of production or implement practices on working lands that will reduce yield. However, a huge portion of corn grown in Indiana either never becomes food (and instead becomes ethanol), or only indirectly becomes food for humans after it is fed to animals. So, no, these risks aren’t necessary to feed the planet.

However, it can cost a lot for a farmer to adopt practices that reduce these risks and we, the consumers, should not expect them to do this for free. Farming is a challenging business, especially when commodity prices are low (which they are now) and margins are extremely thin. When we, the consumers, expect and demand low prices, we are a huge part of the problem.

VALENTINE: What sustainable practices — whether to protect biodiversity, or human health — are Hoosier farmers adopting to continue a profitable operation at scale?

PROKOPY: There are relatively “basic” practices that have been promoted for several years such as no till and cover crops. There are also edge-of-field practices like wetlands and bioreactors that help to filter runoff before it gets into waterways. And increasingly we’re seeing innovative farmers moving towards regenerative practices that actively regenerate the land. These include practices like no till and cover crops, but also include a more diversified rotation than just corn and soybeans, often including perennials, and integration of livestock onto the land. I would also like to see us grow more of the food that we eat in the state with more horticultural crops incorporated into farming operations.

VALENTINE: What are the biggest barriers to farmers making more environmentally sustainable decisions, and how do you work to help them overcome them? (land ownership next question)

PROKOPY: Farmers of course need to be convinced that practices are not going to affect their ability to stay in business. There is excellent research being done at Purdue and other places on the economic benefits of different practices. My work focuses more on understanding farmer attitudes and how conservation professionals can communicate with farmers in ways that speak to farmers’ values and the ways that farmers think about their farming operation. I conduct my research using a variety of social science methods, including surveys, interviews and focus groups. We not only talk to farmers but to other agricultural stakeholders such as ag retailers, conservation agency staff, ag bankers, etc. A lot of our work helps to illuminate networks that are used for information exchange in the ag sector – we then work with conservation professionals to insert conservation information into those existing networks.

VALENTINE: How has farmland ownership shifted in the past years, and what does that mean for conservation?

PROKOPY: Over 40% of farmland in Indiana is not farmed by the person who owns it. This is a huge problem and the percentage of rented farmland is increasing. Farmland owners vary quite considerably – they range from retired farmers who understand well the challenges of farming, to widows who still live on their farmland, to people who have inherited farmland, all the way to people who have actively purchased farmland as an investment. Some landowners are actively engaged in farming decisions while others live far away and hire a farm management company to interact with the tenants. In our research on rented lands, we find a number of barriers inhibiting the adoption of conservation practices. We have been partnering with The Nature Conservancy and Johns Hopkins University to test different messages and incentives to increase adoption of cover crops on rented lands. So far, we have learned that “information only” messages work better than messages with an environmental or economic focus and we have learned that financial incentives do not work, especially in a short timeframe.

VALENTINE: I often hear that beef is bad for the environment, but there is a growing movement around regenerative agriculture that sees cattle as integral to soil health and even carbon sequestration. What does the science show, and what is being done in Indiana?

PROKOPY: Not all beef is equal. Beef from cows raised on rangeland is preferable to beef from cows raised in confined feeding operations, where they eat corn and soybeans often grown in unsustainable ways. In fact, one could argue that having cows on rangeland is much better for the environment than that land being converted to cropland. Similarly, integrating livestock grazing into a diverse row crop operation can be beneficial for the soil and is preferable to artificially terminating cover crops. As with so many things, the answers are complex.

VALENTINE: What about us city folk? What can we do to make our state’s farmland more sustainable?

PROKOPY: Pay for what you value. If you value water quality, climate change mitigation, and soil health, talk to your local farmers about how they farm.

A compilation of features focusing on environmental leaders.