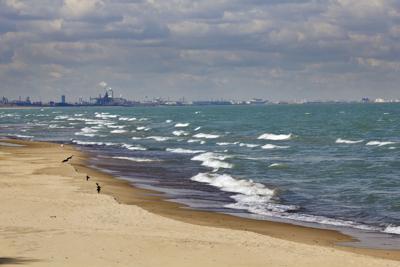 Live someplace long enough and the novelty is bound to wear off certain things. Like, for instance, chemical spills. Over the weekend, U.S. Steel, that abiding cornerstone of 19th Century American capitalism, discharged a still undisclosed amount of rusty-looking fluid into the Burns Waterway, a tributary that feeds into Lake Michigan. Video showed the spill making its way toward open water like a hungry plume.

“It was heading out into Lake Michigan,” said Barbara Lusco, harbormaster at the nearby Sammie L. Maletta Public Marina. She called it “a rusty kind of thick substance.” Beaches were closed in the Indiana Dunes National Park and American Water shut down its Ogden Dunes treatment facility.

U.S. Steel in a temporary fit of contrition temporarily closed the offending plant. Then announced the murky water was caused by “elevated concentrations of iron.”  The company added in a written statement that: “Preliminary sampling results have shown that we remain in compliance with numeric permit limits...There are no indications of permit level exceedances for hexavalent and total chromium.”

Nothing to see here, right?

Four years ago, in 2017, the same U.S. Steel Portage plant created a massive fish kill when it spilled 300 pounds of hexavalent chromium into the same waterway. It has been caught in seven other water violations since then, including “scummy discharges” of oil, grease, and sulfuric acid.

Earlier this summer, a federal court approved an agreement requiring U.S. Steel to pay a $601,242 civil penalty for that 2017 spill, in addition to covering the costs of clean-up. This might sound like a lot of money to you or me but turns out to be a pittance when you consider U.S. Steel turned a $1.012 billion dollar profit in just the second quarter this year. According to the Northwest Indiana Times, U.S. Steel now has liquidity of $4.176 billion, including a stockpile of more than $1.329 billion in cash.

“Our mission is to provide customers with profitable steel solutions that benefit people and planet,” said the steelmaker’s President and CEO David B. Burritt touting what he called the company’s “Best of Both” business model.

Best of Both. For U.S. Steel, this appears to mean ducking responsibility when it comes to polluting Lake Michigan while being spared harsh penalties by state and federal courts and regulatory agencies. But that’s the history here since old-time industrialists started sending iron ore boats down Lake Michigan in the 1890s. For over a hundred years U.S. Steel has all but defined this region. It practically built the city of Gary and provided good-paying jobs for countless people. When Democrat Frank Mrvan ran to replace longtime Representative Pete Visclosky in congress, he ran as a proud Union Man, with plenty of people sporting United Steelworkers merch at his rallies.

People want to believe U.S. Steel means well and is trying to do its best “for people and planet.” That it tries, it really does, to run a clean operation. But this wishful thinking is offset by the company’s record of repeated violations. It knows that it is virtually untouchable. The imposition of additional regulatory requirements and monitoring by way of punishments are merely a nuisance — the cost of doing business.

EPA administrators, judges, and mere citizens like me can rave on all we want about the importance of Lake Michigan’s freshwater. Some even call it the 21stCentury’s most valuable natural resource. But we’re a hundred years behind the times. As long as we’re defined by steel, that’s where we’ll stay.