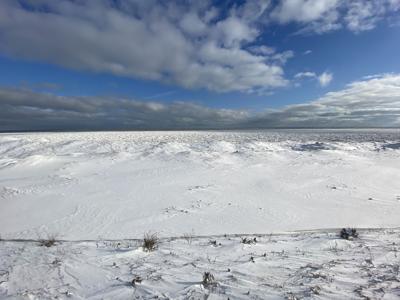 My wife and I used to arrange our schedules so we could limit our portion of winter. We were lucky, able to take breaks in warm places, within sight of a large body of water.

COVID snapped that string this year. Instead of packing up for points more tropical, we have opted to wait out the pandemic, get our shots and adapt ourselves to the slower, more measured cadence that comes with cold weather.

January was relatively easy. We enjoyed more than our usual share of sunlight and, since the lake remained well above freezing, we were spared, bone-clenching air temps. There was no snow to speak of; we walked freely on the beach and through the duneland woods in Moon Valley. “Hey,” it was tempting to say,” this isn’t so bad.”

February’s a different story. It’s been well below freezing for over a week and snow has become an almost daily occurrence. As I write this, the air is filled with the gravitational hush of snowflakes, countless yet singular, falling through the treetops.

The lake is freezing. Until a week or so ago, it just looked cold and uncomfortable — at night we could hear it tossing and turning, like a sleepless gray-green giant. Then temperatures dropped. Great sandy balls of ice started washing up onshore and, shortly after that, an ice shelf began to form.

Given the beach erosion we’ve been experiencing, the ice shelf is a welcome development. Once a border of ice is established along the shore, it builds upon itself, piling upward and out, farther and farther, until, instead of water, all you see is a great tundra-like plain extending all the way to the horizon. The ice contains the waves that would otherwise come crashing in, devouring the beach and putting property at risk.

The lake becomes a vast, still expanse, a splendid desolation. It’s a surreal sight. If you stand close to the edge, you can hear movement, whispering secrets, beneath the icy crust. The strangeness of this draws some people toward it, makes them want to walk, as it were, on water. Yet while the lake may look solid, its actual density is unpredictable, making for nightmarish scenarios in which some eager fool falls through what is actually a canopy and finds himself in freezing water, looking up at a roof of ice overhead, with no easy way out.

Our cold spell is supposed to last another week or more. In the woods, deer have started standing on their hind legs to poach what nutrition is available from the lower limbs of evergreens. Our gutters are draped with icicles as long as my arm. On the phone, my friend Bill, calling from Hollywood, Florida, tells me the temperature there is 80 degrees. I, who am covered by at least three layers of clothing, can only wonder when he last put on so much as a shirt.

Where he is, the great Atlantic Ocean rises and falls, its tidal predictability creating the illusion of a continuous present. Lake Michigan is different. Later, we may bundle up and walk down to see what it looks like today. Whatever else we see, it will look like winter.