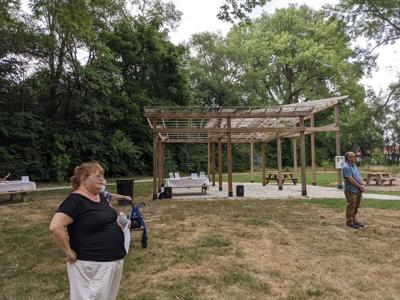 Provide options for people to naturally connect in person and some polarization will be resolved.

Trains rumbled, planes thundered, cars swooshed— a cacophony of built environment inserting itself upon the dedication ceremony of Indianapolis’ newest near westside urban park, as a space returning to its natural roots.

If you’re part of the perpendicular v-shaped neighborhood on the north side of West Washington Street, accessed by a sharp curve onto Rockville Ave., and that within a few yards spills onto Rockville Road, you know the exact location of 3844 — a place of civic caring as the newly developed ’Shelton Heights Neighborhood Park’.

“This is an incredible neighborhood accomplishment,” summarized Mayor Joe Hogsett at the Aug. 17, 2021 dedication ceremony. “To have come this far since 2016 is nothing short of tremendous. It is a one-of-a-kind park in Indianapolis.”

With County City Councilor Jared Evans as emcee, a who’s who of city-wide and westside Indianapolis revitalization leaders added their accolades to what is possible when neighbors work together and wield their personal and collective powers of leadership. For this specific space, it took one person to step up, ask for help, and push past indifference to ‘make a difference.’

“I was not going to run away and let another neighborhood go to ruin,” said Debbie Parish. “I decided to fight it out.”

The story goes this way, according to retellings: Mary Chalmers, a Neighborhood Development Specialist at INRC [Indianapolis Neighborhood Resource Center], met Debbie Parish in a meeting in late 2016. They talked about challenges and opportunities in the area, including proposed new businesses, some of which the neighbors opposed and were able to stop. Mary then invited Debbie to share the neighborhood’s story at Neighbor Power Indy 2017, leading to Debbie participating in the NPI presenter training at INRC.  With Mary’s encouragement and support, Debbie shared a powerful story of neighbors reclaiming their neighborhood.

What we experience within the embrace of a quarter-mile space, bordered by an elevated railroad track and city streets, is a no-fuss setting as much a home to a Falcon family, as it is to a prairie flower haven for butterflies and bees, paying no attention to humans.  At the entrance is a 4-H built food sharing box stocked by neighbors for the benefit of each other, alongside a mini-box book exchange. A gazebo is alongside a pathway, soon to be handicap safe-paved through a grant from the OrthoIndy and Indianapolis Orthopedic Hospital Fund/CICF, leading to the ‘Bending Light/Doblano La Luz’ artworks, engaging visitors with the concept of refraction as a life force.

As much a quality of layered human activity as it is a coming together of found objects polished and arranged for the play of natural light from east to west, this cluster installation is constantly engaging us with space, light, motion, color.

It’s a slow-down phenomenon, explains sculptor Lauren Zoll. “This artwork utilizes the light around us and changes the speed at which we can actually observe it. Slowing down to look at light helps us witness it as a necessary ingredient in the process of many things—namely photosynthesis in plants, the ability to experience vision, and even the human need to synthesize light into vitamin D."

Thinking about “Good bones” can engage us within multiple meanings as we slow down in this intersection where rapid transit is the most prevalent urban-centric sound.

Since 2015, when Parish dug in her heels, refusing to leave where she has lived since childhood, slowing down to succeed in building a vibrant neighborhood has become a Wayne Township community mantra with the park as a visible locus point.

“We did this together,” said Parish at the dedication ceremony. “Everyone standing here has been part of the solution.

“I did this for personal survival,” she emphasized.

When you get down to the basics, good things can happen, says Parish. Asking for help brought on a rainbow of agencies and philanthropies working together with neighbors who feel empowered to step forward.

According to Lisa Bentley, Indy Gateway Executive Director, “Shelton Heights Park has been a true community effort and it has been built and continues to be maintained through donations and partnerships, including Keep Indianapolis Beautiful, AES, Indianapolis Neighborhood Housing Partnership, Eli Lilly, and Company, Holladay Properties, Shiel Sexton, Aaron’s Rental, Indianapolis International Airport, and The Skillman Corporation.”

In 2018, Shiel Sexton employees, through their “Day of Service,” volunteered with Keep Indianapolis Beautiful to construct a wooden pavilion and to plant a new, inviting landscape that included flowers, shrubbery, and mulch. “We want our projects to deliver more than just a community space, but a positive and lasting impact for years to come,” cites the Shiel Sexton post. “[We are] proud to be a part of annual neighborhood revitalization projects as a part of giving back to the Indianapolis community.”

I reached out to Aaron Kowalski, associate planner with MKSK Studios, to describe the revitalization process forward to the Aug. 17, 2021 dedication.

Rita Kohn: What attracted you to undertake the design and development of this new City Park?

AARON KOWALSKI: MKSK was asked to work with Keep Indianapolis Beautiful to provide a Shelton Heights Neighborhood Park concept. We were attracted to the story and the grassroots effort provided by the neighborhood to transform this blighted mobile home park into a place that could foster community. In addition, we were working with the City of Indianapolis Department of Metropolitan Development at the time to develop the West Side Strategic Plan and TIF Implementation Plan. This large-scale planning process sought to provide short-term wins such as the Shelton Heights Neighborhood Park and longer-term revitalization for the west side through enhanced infrastructure, transit-ready smart development, and public transportation linkages.

Kohn: What has been the most delightful part of this civic enterprise?

KOWALSKI:  Truly getting to know the west side community has been the best benefit of this process. Counselor Jared Evans, Lisa Bently at Indy Gateways, and others have been wonderful champions for the Shelton Heights community and the west side.

Kohn: How did the interaction with neighborhood leaders unfold [and enfold] as you developed initially [and modified?] and coordinated with the bouquet of partners who also stepped up?

KOWALSKI: We were involved on the ground floor and had great dialogue with neighbors and partners. The leadership of Indy Gateway cultivated the partnerships truly; we just helped shape the vision led by their input.

Kohn: What historic research has been undertaken for this parcel of land so the community grows within the awareness of who and what was here before now?

KOWALSKI: The history of this place is important, but more so in Shelton Heights, we focused on creating a safe space that the neighborhood could use and be proud of.

Kohn: How did your concept encourage/lead to/ merge with/ the artwork as a permanent installation? And with the 'back to nature' concept underfoot?

KOWALSKI: Again, the mantra we followed during the concept was safe space for Shelton Heights. The mobile home park that existed here along the railroad tracks really had no meaningful open space, and we felt that by creating a small eco-system here in Shelton Heights, we could provide healthful and impactful space to the neighborhood.

Kohn: What does the Indianapolis population need to know about this new park--how it serves as a template for the real-life meaning of 'neighborhood'?

KOWALSKI: When neighborhood leaders, the city, and non-profits like Indy Gateway and Keep Indianapolis Beautiful work together, transformational things can occur to uplift our neighborhoods. But this is just part of the story, Indy Gateway is doing so much for the west side of Indianapolis, and I look forward to seeing the future efforts of this organization.

In his bio statement, Kowalski cites, “My passion lies in studying rich environments that people live in, figuring out how they tick, what connections exist, and how to improve upon their functionality in order to improve economic and social performance of a community.

Upon completion of phase one, fundraising began for future phases of the park and for ongoing maintenance costs of the park that are the responsibility of the Shelton Heights Park Board through the Shelton Heights Park Fund established and managed by Indy Gateway, a not-for-profit 501(c)(3) community and economic development organization on the west side of Indianapolis.

The brochure accompanying Bending Light  cites: the installation "is a gift to the people who enjoy Shelton Heights Park." The brochure. produced by Indy Art & Seek, is part of the "self-guided public art tour featuring more than 100 engaging and accessible mini-installations, performances, literary pieces, individual artworks along urban streets, as well as six large-scale installations in KIB GreenSpaces throughout Indianapolis."

Learn more and stay up-to-date on the project by following @indyartandseek and #artIND seek on social media! The map is available at https://www.kibi.org/indy-art-and-seek.

Debbie Hatfield Parish walks the talk as a citizen servant

Blessing Boxes, made using former NUVO kiosks, are showing up in Wayne Township. Their contents of food items and encouraging messages are for the taking; and giving.

Debbie Parrish and her blessing boxes.