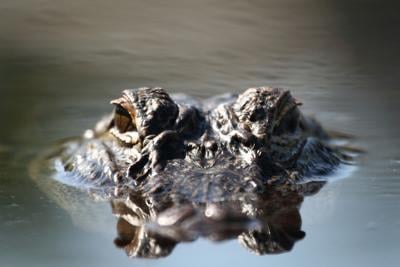 The Indianapolis Zoo officially opened its newest exhibit, Alligators & Crocodiles: The Fight to Survive, on May 29.

Along with a small group of invitees, I attended a preview session in monsoon-like weather the afternoon before.  No one minded getting soaking wet, least of all the alligators and crocodiles, and certainly not the grandchildren of a friend. They are visiting Indy from their home in the State of Hawaii. Their enthusiasm and close attention to the details of likenesses and differences between crocs and gators deepened my understanding about what makes an exhibit compelling and why it’s o.k. to take species from their natural habitat and place them in a zoo.

What my young companions articulated centers on having respect for all aspects of life on our planet. That’s heady stuff for pre-teens, who asked the interpreter stationed at the exhibit deep questions about survival when so much has been done to kill these direct descendants of dinosaurs. The nitty-gritty, however, was learning why differences between alligators and crocodiles came about—particularly in the shape of the snout: rounded for gators, pointed for crocs; and the makeup of the jaw, mouth, and teeth. Could it be adapting to food sources in their preferred natural habitats—bodies of freshwater for gators, both fresh and saltwater for crocs?

The conversation, abetted with skeletal jaws of both species, explored the relationships between alligators that reside in southeastern United States, South Africa, and China, and crocodiles that can be at home all over the world. But there is one place only where crocodiles and alligators can and do co-exist: The Everglades.

American crocodiles also can be found on the islands of Cuba, Jamaica, and Hispaniola, as well as along both coasts of southern Mexico and Central America, south to Ecuador on the Pacific coast of South America, and Venezuela on the Atlantic coast.

We came to learn about crocs and gators and, along the way to figuring things out, earned a wider understanding of geography and adaptation.

Crocodiles and alligators belong to a group of reptiles called crocodilians, the largest living reptiles. Of the 23 different species of crocodilians in the world, two species are native to the United States,

We also learned that gators generally are friendly in the company of people. On the other hand, American crocs tend to be shy and, unlike their distant relatives in Australia and Africa, have little interest in hanging out among humans.

This observation led me to ask if the visiting children have read “Peter Pan”—where Tick-Tock the Crocodile pursues Captain Hook within the realm of Neverland.

It’s on the list to be read, I was informed.

Books for young readers about crocodiles and alligators have proliferated since first I encountered Lyle the Crocodile, who made his home in the bathtub of the Brownstone house on 88th Street in New York City. The series by Bernard Waber that began in 1962 still is found in bookstores, alongside Crocodile Tears, by André François, first published in 1956 and republished in 2017.

What’s behind the saying, ‘crocodile tears’— as in “insincere crying”?  There really is a scientific reason for reptiles shedding tears while eating, and that’s been detailed through research by University of Florida zoologist Kent Vliet in a  study that was posted on the  Oct. 4, 2007, edition of Science Daily, University of Florida. "No Faking It, Crocodile Tears Are Real."  <www.sciencedaily.com/releases/2007/10/071003151131.htm>.

It’s been a few decades since last I taught college classes centered on literature for young readers, so I headed for the most current ‘best of’ on the internet, whittled down from well over a hundred titles, suitable for ages three and upwards, including the well-loved Magic School Bus PBS series and highly commended National Geographic books.

The new exhibit stresses “the importance of conservation through the success story of the American alligator, a species that has rebounded from the brink of extinction,” said Indy Zoo spokesperson Carla Knapp, in a news release

“The Indianapolis Zoo protects nature and inspires people to care for our world,” underscored Knapp.