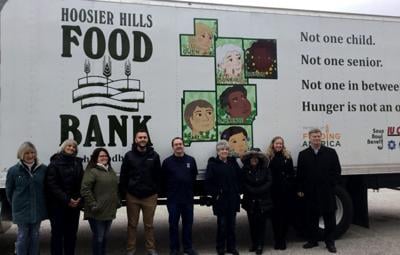 Hunger is on the rise across Indiana and food banks are seeing an increased demand as Hoosiers continue to reel from the economic impact of the COVID-19 pandemic.

At the onset of the pandemic in March, Gov. Eric Holcomb ordered a statewide shutdown of schools, activities and all but the most essential businesses and thousands of Hoosiers saw their livelihoods disappear.

In April, as the worst of the pandemic rippled through the economy, Indiana’s unemployment rate soared to 16.9%. In June, the rate was still high at 11.1%, which was more than three times higher than July 2019’s rate of 3.2%. The rate fell to 6.4% in August, but that rate is still double what it was in early March before COVID-19.

The Hoosier Hills Food Bank has seen an increase in demand as the COVID-19 pandemic has continued. Provided photo

“For families who were already struggling to make ends meet, this took away their ability to put food on the table,” said Julio Alonso, Hoosier Hills Food Bank executive director, of how the pandemic lower-income people.

A study conducted by Feeding America, a national network of more than 200 food banks, shows that the 2020 food insecurity rates in Indiana counties are projected to be 5% higher than 2018’s average rate of 13.2%.

That increase means that more than one in five people in Marion and Monroe counties face food insecurity.

The rise of food insecurity in Indiana because of COVID-19 has stressed food banks around the state. The Indiana National Guard was deployed early on to work with officials from the Family and Social Services Administration to distribute need supplies of food to organizations like Hoosier Hills and others. FSSA is seeking volunteers to help with the work as the pandemic drags on into winter and the National Guard has reduced the number of its people doing the work.

“The food pantries and other agencies that we work with started seeing significant increases in clients early on and those increases have been largely sustained throughout the crisis,” Alonso said.

The Bloomington-based food bank has seen a 40% rise in distribution compared to last year and has already exceeded the amount of food distributed in 2019. With the help of the government and the community, the food bank has been able to keep up with the demand and safely serve Owen, Monroe, Brown, Martin, Lawrence, and Orange counties.

Alonso said that in addition to the normal distribution efforts, Hoosier Hills has added special mass food distributions and has served more than 8,900 household in 11 distributions.

Rep. Matt Pierce, D-Bloomington, said that Monroe County along with other parts of Indiana had food insecurity problems before the pandemic.

“COVID-19 has peeled back the curtain on a problem that already existed,” Pierce said.

Pierce said he is not very optimistic that the state will step up in a meaningful way to help those dealing with the ongoing hunger crisis.

“Indiana got billions of dollars and from the CARES Act and are sitting on it,” Pierce said.

Pierce is referring to the $2.4 billion dollars Indiana received from the Coronavirus Aid, Relief, and Economic Security Act. He believes the state is holding a large portion of the money in the hope that Congress will allow Indiana to use it for the budget.

Wednesday, one aspect of food insecurity was addressed in Gov. Eric Holcomb’s update in the fight against COVID-19. It was announced that the state will allocate $42 million to 261,758 students to make sure virtual students who are away from the services schools provide have access to food.

Students who were already eligible for free and reduced lunch will be eligible to receive the assistance, which will be around $6 a day, equaling the amount it would cost to feed the student at school.  Families that do not receive Supplemental Nutrition Assistance Program will receive a SNAP like card, and families that do receive SNAP will receive the money on their cards.