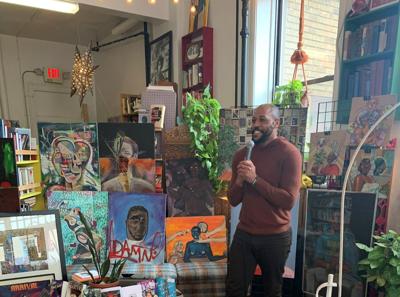 Last summer Elysia Lucinda Smith, Owner of Irvington Vinyl & Books, took action. Moved by the murder of George Floyd, the upheaval, outrage, and social activism that followed, Smith went to protests. She learned first aid. She kept her bookshelves, as always, stocked with titles by authors reflecting diversity. And the actions she took didn’t seem to be enough for her, as a citizen and local business owner.

“As I saw the landscape begin changing, I realized being ‘involved’ in fighting racism is more than just showing up to a protest,” says Smith. “In order for us to combat racism and oppression we need to fight institutions and we need to do a little every day.”

The virtual event will be live-streamed on the event page and Irvington Vinyl & Books on Facebook and feature performances from top local artists including Curley Q, Eliot Bigger, Kleaner, EEEKA, Jessica Albatross, the Anti-Feds, Machailia Gray, Rae Parker, Nasreen Khan, Samuel Penaloza, Manon Voice, Januarie York, Gwen Sunkel, Ryan Rajer, and Dwight Simmons, and more. A digital artwork gallery will also be for sale with 10% of all artwork proceeds and 20% of all Irvington Vinyl & Book’s sales going to the R/Evolution Fund. Donations can be made directly through the CICF website. Irvington Vinyl & Books is also open to visit in person.

Smith sees advocacy as part of the role of her business in the community. “As a business owner that relies on local artists to help grow my business, I wanted to do something specific to give back and to ensure the artists I rely on for my business to thrive can thrive alongside me,” she says.

Smith is aware, she says, of the complications and privileges of her business location in Irvington.  After all, the community was once home of an infamous Klan Grand Dragon, and today supports a diverse community, including its artists.

“You cannot be a small business owner today and not think about the space you inhabit,” she continues. “My store is located in a very white bubble of prosperity —  Irvington. And Irvington wouldn't be this white bubble if the Klan hadn't been so active in the initial founding of the neighborhood. Because of this fact, my mission is to make a home for the full community of the Eastside, which is largely Black.”

For Smith, the fund and her mission address a service to individuals, the local community, and the national artistic stage. “I can't build an arts co-op and neglect my target audience's basic needs,” she says. “As far as BIPOC artist contributions in the city, I'd say the city's primary arts community is Black and if we're going to advance to the national scene, we need more people realizing that and supporting our Black artists.”

As Irvington Vinyl & Books nears its three-year anniversary on June 30, Smith is continuing her effort to benefit the city — its citizens, artists, and businesses.

“Making an intentional effort to be both of and for the community is a core part of building a future as a business owner,” says Smith. “After a global pandemic and amidst ongoing systematic racism, our local artists deserve our care.”