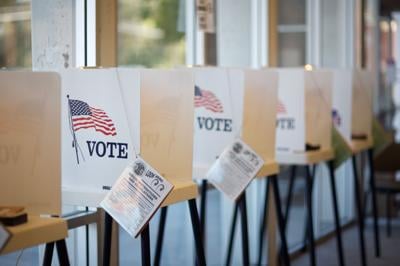 For the last eight years, Indiana has ranked among the bottom 15 states in voter turnout, with about half of Hoosiers voting in presidential election years and as few as one in five in local elections.

The reasons range from voter apathy and a lack of information about who is running to regulations and policies that create obstacles to casting a ballot. They include polls that close at 6 p.m., the earliest in the nation, registration that closes a month before the election, limits on who can vote by mail and legislative districts that are gerrymandered so the minority party rarely has a chance of winning.

“We have been at or close to the bottom of 50 states in voicing our opinions and putting our input into the system,” said Linda Hanson, co-president of the League of Women Voters of Indiana. “And that is unconscionable I think for democracy.”

Census data show that in the last presidential election year, there were about 5.1 million voting-aged Hoosiers and 4.8 million people—about 96%—were registered to vote. About 58% voted in the general election, ranking Indiana 41st in voter turnout, according to worldpopulationreview.com.

Turnout was worse in the 2019 municipal election—23% of registered voters in Indiana turned up at the polls. In the 2018 general election, when members of Congress and a U.S. senator were elected, the number was 51%.

Julia Vaughn, director of Common Cause Indiana — a group advocating for legislation that makes voting easier, including the right of voters to contest poll closing times — said that there are ways the state can improve the number of Hoosiers that cast their vote.

“Indiana should try to make voting the most inclusive thing we do in our state,” Vaughn said.

Two issues Vaughn said cause a lack of voter turnout are the voter registration deadline — which is roughly a month before the election — and a lack of reliable information about candidates.

States like Minnesota — the state with the highest voter turnout — allow registration on Election Day at polling locations. Others, like Oregon, automatically register citizens when they become eligible.

Indiana Citizen is a nonpartisan organization founded with the goal of reaching 750,000 of the state’s estimated 1.7 million unregistered voters and providing support to help with registration and education.

Registration in Indiana for the 2020 general election ended Oct. 5, about a month before Election Day. Indiana does not offer same-day voter registration.

Some states — like Oregon, Washington, and California — have candidate guides that help guide voters on their decision and these guides are mailed to all registered voters. Vaughn said Common Cause is working to create voter guides for Indiana candidates, but this may be available online only.

Indiana also has the earliest closing time in the nation, tied with Kentucky, at 6 p.m. A 2019 law said the closing time was not allowed to be challenged by citizens, just by election officials. That was overturned in a recent federal court decision.

In the ruling, U.S. District Judge Richard Young noted that the state limits voting with an early closing time and the need to have a reason to apply for an absentee ballot. Indiana remains one of four states to ban no-excuse absentee voting.

Another factor in voter turnout is whether the race is competitive.

Hanson said that the way legislative district boundaries have been drawn with lopsided numbers of Republicans or Democrats has had an impact on voter turnout.

“We’ve had a lot of districts, both for the state legislature, and for Congress that have not been representative, that have not been competitive,” Hanson said. “And so redistricting becomes a major issue in order to affirm that voters do have a voice.”

After the 2010 census, Republicans in the Indiana General Assembly drew legislative district lines that left them with an overwhelming majority in the House and Senate. In fact, Republicans have been a supermajority in both chambers, which means business can be conducted without Democrats.

There are other details that can cause voter turnout to vary, like how noteworthy candidates are and other distractions in the world. The distraction in 2020 is the COVID-19 pandemic, which is  could be taking up more time on the news.

“Usually this time of year would be focused completely on the election,” said Laura Wilson, assistant professor of political science at the University of Indianapolis.

Voting groups have been pushing for the expansion of no-excuse mail-in voting because of COVID-19. Though allowed in the June primary because the state was in a lockdown ordered by Gov. Eric Holcomb, officials have said there are plenty of options for Hoosiers to vote in person. Proponents of no-excuse absentee voting sued but lost an appeal in the 7th U.S. Circuit Court of Appeals.

Along with several other voting rights groups like Indiana Vote by Mail and Common Cause Indiana, Moreau said that Indiana Citizen fought for no-excuse mail-in voting.

“The pandemic has made Hoosiers understandably apprehensive about standing in long lines in close proximity to others,” Moreau said. “That’s why we were supportive of no-excuse absentee voting in the primary and advocated for it in the general election.”

Vaughn said that voters should vote as soon as they receive their mail-in ballot and return it as soon as possible to ensure that their vote is counted.

“Hopefully Indiana’s numbers will go up this year, but we still have the structural barriers,” Vaughn said.

Taylor Wooten is a reporter for TheStatehouseFile.com, a news website powered by Franklin College journalism students