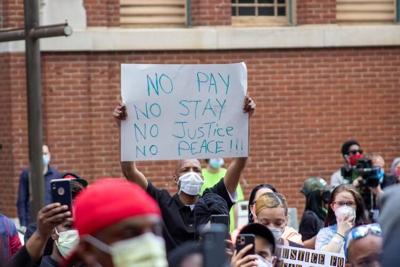 Originally published in the Indianapolis Recorder

Indianapolis Metropolitan Police (IMPD) Officer De Joure Mercer will not be indicted for the shooting death of Dreasjon Reed.

The grand jury’s decision on whether Mercer could face criminal charges was announced during a press conference Nov. 10 at the Indiana State Police Museum.

“No one wins here’,” special prosecutor Rosemary Khoury said. Khoury, a prosecutor from Madison County, was brought in to determine if Mercer should be charged in Reed’s death after Marion County prosecutor Ryan Mears recused himself. While Khoury said she believes justice was served because she trusts the system, she said the process was difficult, especially since she is the mother of two Black boys.

Reed was killed May 6 following a car chase with IMPD, which was streamed live on Reed’s Facebook page. During the press conference, Indiana State Police (ISP) provided details of the events leading up to Reed’s death.

In August, Khoury asked ISP to review more than 100 hours of evidence.

ISP Superintendent Doug Carter said he knows this isn’t the outcome a lot of people wanted, but “hopes and prays for civility in the city.” Following the press conference, he said there is an increase in police presence downtown to prevent the damage that happened in May from repeating.

According to state police, IMPD officers chased Reed after he ran a car off the road on I-65. The 21-year-old’s death — coupled with the death of McHale Rose, 18, a few hours later — sparked protests throughout downtown Indianapolis that turned to violence May 29 through May 31.

In August, Khoury announced a grand jury was brought in to analyze evidence in the case to determine if Mercer committed a crime.

After the press conference where Khoury announced the grand jury’s decision, ISP held a review of evidence. ISP Detective Jeff Hearon said evidence from Reed’s Facebook video showed a gun in Reed’s waistband. Hearon said an investigation found Reed’s gun was stolen from a pawn shop in Texas and had been used for two drive-by shootings in Indianapolis. Fifteen bullet casings were found at the scene. A ballistics investigation found Reed’s weapon was fired twice, but Herron could not say definitively who shot first.

Hearon said Mercer’s taser did not subdue Reed. One of the barbs went through Reed’s shorts and therefor didn’t deliver a full circuit, and evidence suggests Reed fired his weapon after being tased. During ISP’s press conference, video footage was slowed down to show two bullet shell casings crossing one another. ISP said they can’t know for sure whether Mercer or Reed fired first, but are confident that both men fired their weapons. Audio analysis showed overlapping gunshots, which Hearon said would have been impossible if only Mercer was firing a weapon.

This story is ongoing and will be updated as more information becomes available.