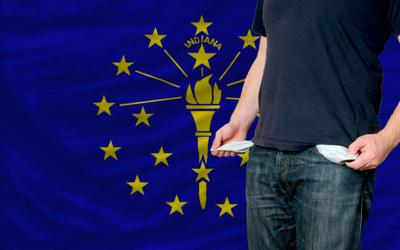 Poverty is a human issue with many dimensions including race, gender, occupation, and geography. Its elimination is also multi-dimensional.

When not battling with minority members, the dominant Republicans in the Indiana House of Representatives might attend to the plight of 868,000 Hoosiers (13.4 percent) below the poverty threshold.

In the event it did not strike you, 868,000 persons in 2019 was about the same as the population of 43 Indiana counties combined.

Before we go further, consider those poverty thresholds which include numerous benefits such as Medicare, Medicaid, SNAP, Social Security, pensions, etc.

For a single person, under age 65, the threshold is an income of $13,064. A college student, working half-time at $12.56/hr., fits that description. Thus, Monroe and Delaware counties, with their relatively large college populations, lead the state with poverty rates in excess of 20 percent. Vigo and Tippecanoe are similarly college-impacted counties with large numbers of young, part-time workers.

Those four counties are among the top nine Indiana counties with poverty rates in excess of 17 percent. Switzerland and Crawford, in that same group, are traditional poverty locales, geographically distanced from opportunity. Fayette, Grant, and Marion, also in the same group, are victims of major shifts in manufacturing.

For a household with one adult and one child, the threshold is $17,308. Two adults and two children, $25,465. How many of our state legislators can imagine living a full year, in this century, on so little income?

What is the color of poverty in Indiana? It’s White; 70 percent of all Hoosiers in poverty are White, but the poverty rate for the White population is only 11 percent.

By contrast, Blacks or African Americans are 19 percent of those in poverty while constituting just nine percent of the total population; the poverty rate for Blacks is 27 percent.

The Hispanic or Latino populations of Indiana are12 percent of those in poverty, but just seven percent of all Hoosiers, with a 22 percent poverty rate.

Importantly for Whites, Blacks, and Hispanics, the poverty rate is higher in Indiana than in the nation at large. Indiana matches the national poverty rate (13.4 percent) only because our Black and Hispanic populations are a lower percentage of the total than is the case nationally.

What’s to be done to eliminate poverty, not just ameliorate it? Destroy the historically accepted barriers to education, health, employment, and housing that exist for so many in this “State that Works” for so few.

Interested readers: Excel file with two spreadsheets that provide data on poverty at the national, state, and county levels. Enjoy.