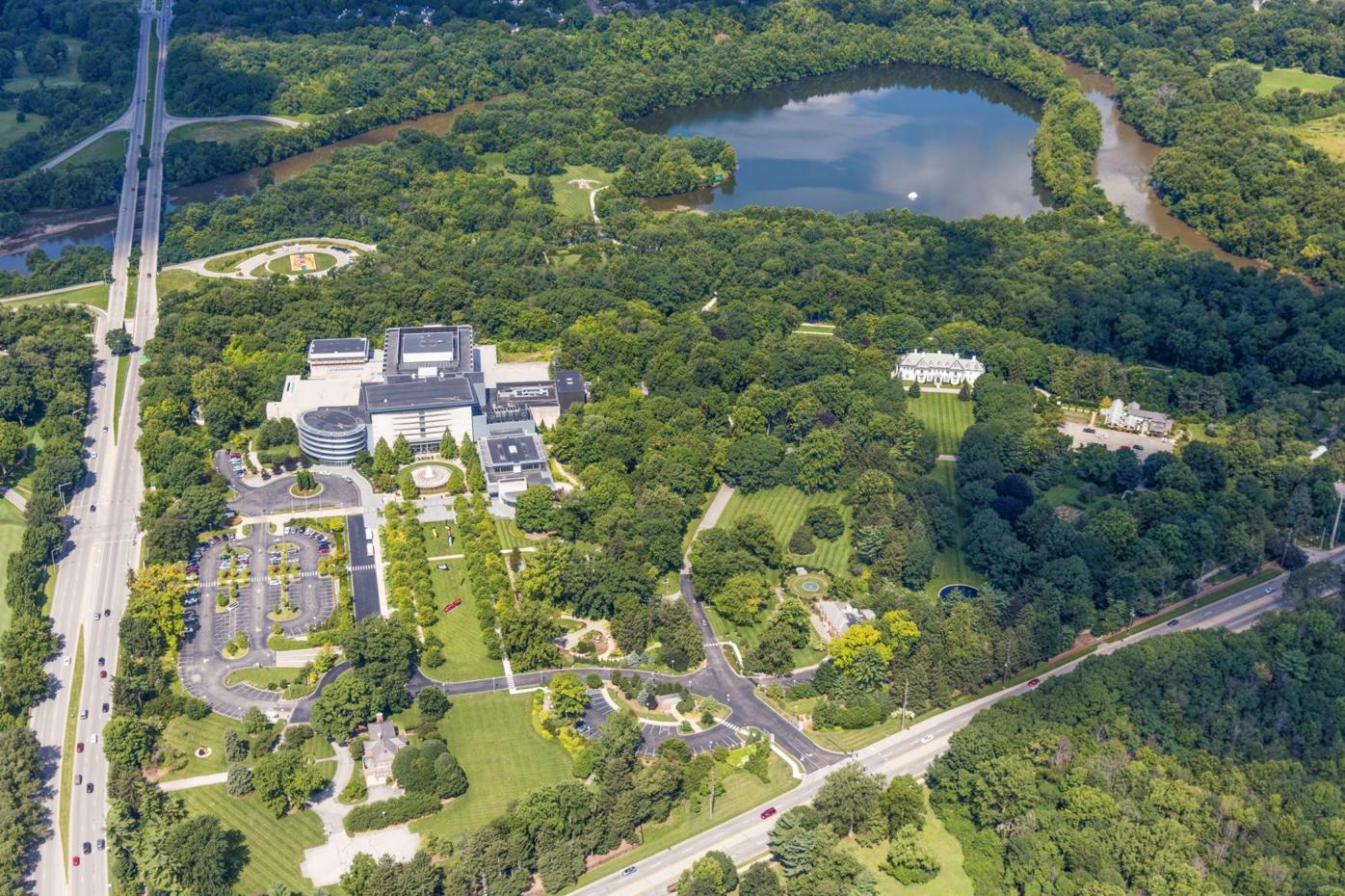 Newfields campus from above 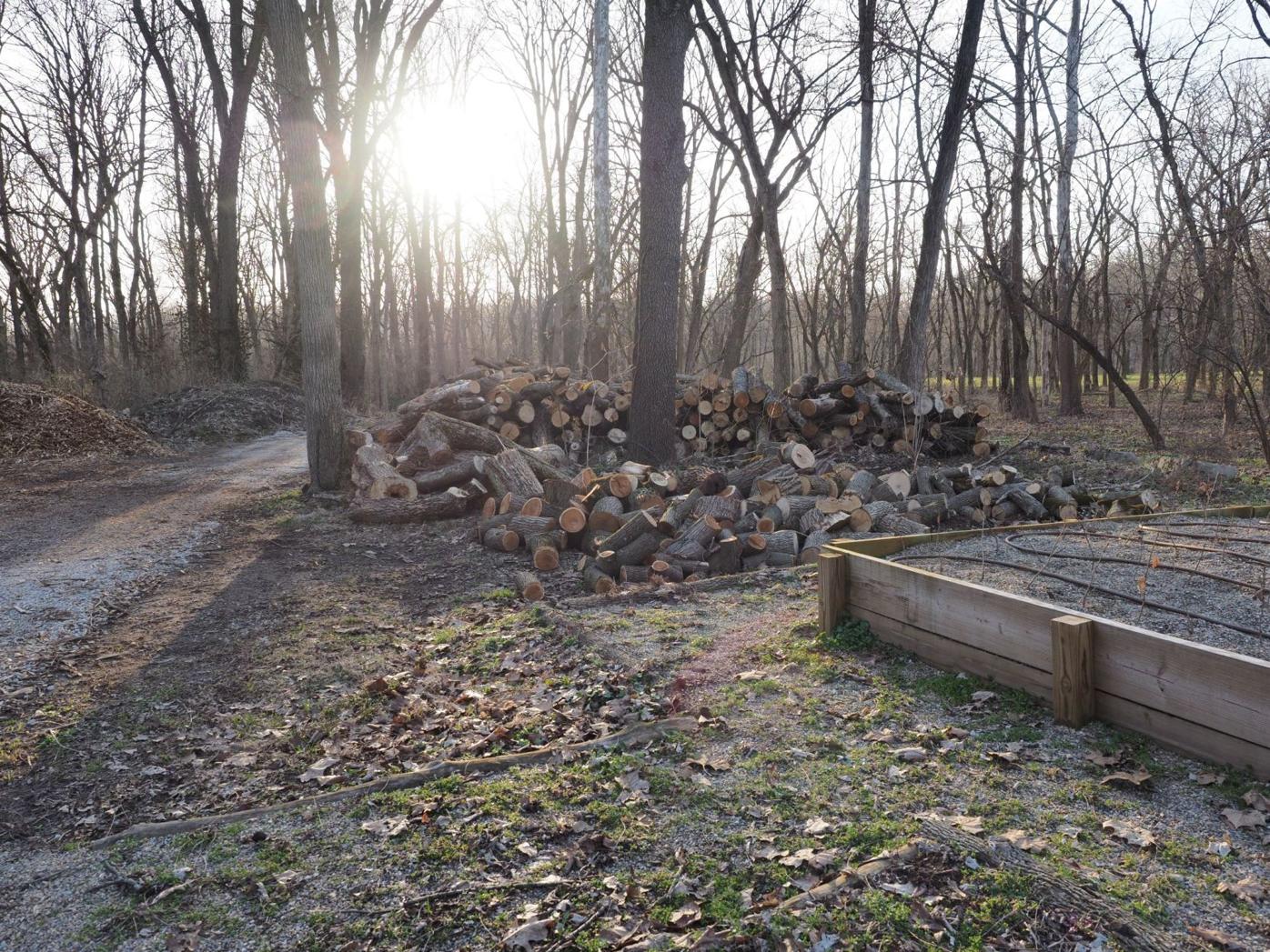 Evidence of cutting in the 100 Acres park

This is one of an ongoing series of articles on Newfields. Next week arts editor Dan Grossman will interview Newfields' deputy director for horticulture and natural resources Jonathan Wright about ongoing projects on the campus. Please share any thoughts or questions that you have in the comments section of this article.

I went to Newfields on the morning of Saturday, April 6 to hear the details on $21.7 million in grants and gifts recently received by the museum.

The announcement raised new questions regarding actions prescribed by Newfields’ master plan, particularly regarding the clearing of vegetation — including some trees —  on the campus in order to create a “pollinator meadow.”

But the announcement also contained answers to some questions asked in the comments section of NUVO after the publication of Bill Watts’ opinion piece, “The Suburbanization of the IMA” on April 1.

Restricted access to the Newfields campus for bicyclists and pedestrians was one of the issues criticized most frequently in the comments on Watts’ article. Watts took issue with the Newfields rebranding, the admission pricing strategy, and the quality of exhibitions in the past few years, among other issues, and the majority of people — but by no means all — who left comments on social media and the NUVO website seemed to agree with his opinions.

During the announcement director and CEO Charles Venable addressed the access matter specifically; he highlighted a $10 million grant to the museum by the Richard M. Fairbanks Foundation to better connect the 100 Acres park to the upper Newfields campus, to Michigan Road, and to the Central Canal Towpath. He also announced a $500,000 grant to the museum by the Indianapolis Department of Public Works, that will be matched by the Fairfield Foundation.

“These generous gifts will enhance the campus perimeter with a new multi-use path wide enough for both pedestrians and bicycles and at long last we will be creating crosswalks at 42nd Street and Michigan Road as well as the main entrance to Newfields,” said Venable.

Also notable, among a host of other initiatives, was the goal of commissioning temporary and permanent sculptures in Newfields' 100 Acres Art & Nature Park.

Venable addressed the lack of recent new commissions in the park directly.

“The original plan was for the sculptures in it to rotate on a regular basis,” he said. “However, following the initial round of commissions done in 2010 for the park’s opening, we have found it difficult to fund new commissions until now ... With the expendable funds and the establishment of an endowment, this program will over time facilitate the installation of temporary art installations and the occasional permanent sculpture throughout [100 Acres] and the garden.”

Other notable initiatives including a planned inaugural Harvest festival this fall. Concurrent with the festival, Yayoi Kusama’s Infinity Mirror Room installation titled “All the Eternal Love I have for the Pumpkins” will be on exhibit in the IMA galleries.

Venable also cited some attendance data from 2018 Winterlights suggesting that the museum’s strategy of attracting a wider, diverse audience through seasonal events is working.

“111,000 guests ... is the largest number of people who have ever attended a single exhibition or program here at Newfields in 136 years,” he said. “24 percent had never been here in over a year and another 20 percent had never stepped foot on this campus in their lives.”

In order to accommodate the overflow crowds for such events, Newfields will create a parking green by reinforcing turf on the Newfields grounds, Venable said. A Pacers Bikeshare station will be added to campus as well and the former Lilly family playhouse will be converted into a Culinary Arts Center. To read more about these initiatives click here.

Another significant, and potentially controversial, initiative has to do with landscaping.

Along with a plan to stem erosion of the path between the White River and the lake, Venable announced that a pollinator meadow will be created in a section of land in 100 Acres between the lake and the Central Canal Pathway.

“This project will replace early successional pioneer species and nonnative invasives with a meadow of native plants that will enhance habitat for native bees and insect populations in our area,” said Venable. “Along with restoring pollinator habitat ... this meadow will be of great aesthetic beauty and recreate the view that once existed from the Lilly House to the White River.  By restoring this viewshed, the original design intent of the Olmsted Firm that created the garden here in the early 1920s will once again grace this extraordinary property.”

As described in a written Q&A provided by Newfields, the forthcoming “pollinator meadow” is meant to serve as habitat for wildlife, birds, and pollinating insects.

The invasive species to be removed in order to create this meadow are described as “short-lived early successional plant species as well as nonnative invasive species such as Amur honeysuckle, white mulberry, box elder, black locust, slippery elm, Chinese elm, and tree-of-heaven.”

Removing these species is described as “very important to forest health.” Newfields maintains that doing so will increase biodiversity in an area where invasive species, most notably Amur honeysuckle, have advantages over native plants.

The museum states that the “few trees in the removal area” will be repurposed or used for projects on the Newfields campus.

After the announcement, I walked to the terrace behind the Lilly House and stood at the balcony for a while, enjoying the view.

David Rubin — the David Rubin of the Land Collective— happened to be there, talking with some people. Rubin, who led the Newfields Master Plan, then came up to talk with me.

With this plan coming into fruition, the terrace, he told me, will be the new “genius loci” of the Newfields campus.

“From this terrace you can understand the breadth of this institution,” he said.

According to the Land Collective website, “a major goal of the [Newfields master] plan is to integrate the IMA’s cultural and natural resources to create a holistic campus experience that enhances engagement with visitors and members.”

But it’s a safe bet that not everybody in Indianapolis will understand sacrificing the trees to save the bees, as it were — or to create a multiplicity of beeline views of the White River from Newfields' upper campus.

In responding to Bill Watts’ article on April 6,  Angela Herrmann commented on some recent tree cutting in 100 Acres:

“On Wednesday (4/3/19) I hopped on my bicycle, in search of spring ephemerals. As I traveled along the canal towpath, passing under Michigan Road towards the 100 acre woods, I thought the woods might be a lovely place to stop. I rolled off the towpath toward Hidden Lake, only to make the most hideous of discoveries: many trees had been cut down near the now not-so-hidden lake — trees that appeared to have been native hardwoods.”

Herrmann is director of communications and outreach at the Indiana Forest Alliance. She indicated to NUVO, however, that her comments on Watts’ article were her own personal views, not those of the organization she represents.

After reading Herrmann's comment, I reached out to the Indiana Forest Alliance. I was promptly forwarded a note from Urban Forest Preservation Director Jerome Delbridge addressed to Katie Booth, horticulturist at Newfields. Delbridge expresses the desire in said note to talk to the decision makers of the project to ensure that "more educated decisions are made in the future"—  particularly if more cutting is planned.

“I saw the tree removal last week at the 100 Acres,” he wrote. “It was upsetting to me that many native trees were removed to install a pollinator meadow.  Possibly the design team and entomologist(s) were not aware [of] the critical importance of the protein-rich pollen boxelder and other maples produce as the first source of food for bees in the spring. Have they not witnessed the densely-packed vertical flower gardens black locusts give every spring or the bees who flock to the blooms? Even the invasive mulberry provides a rich source of food for pollinator species. All tree species I saw removed provide pollen and/or nectar for pollinators.”

Originally the author of this article indicated that a letter was sent from Indiana Forest Alliance to Katie Haigh, Chief Operating Officer for Newfields, but this letter was actually sent to Katie Booth, Newfields horticulturist. We  regret the error.

As the museum continues to shift gears by implementing aspects of its master plan, Indiana Forest Alliance and Newfields come to an understanding on the creation of a pollinator meadow in 100 Acres Park.