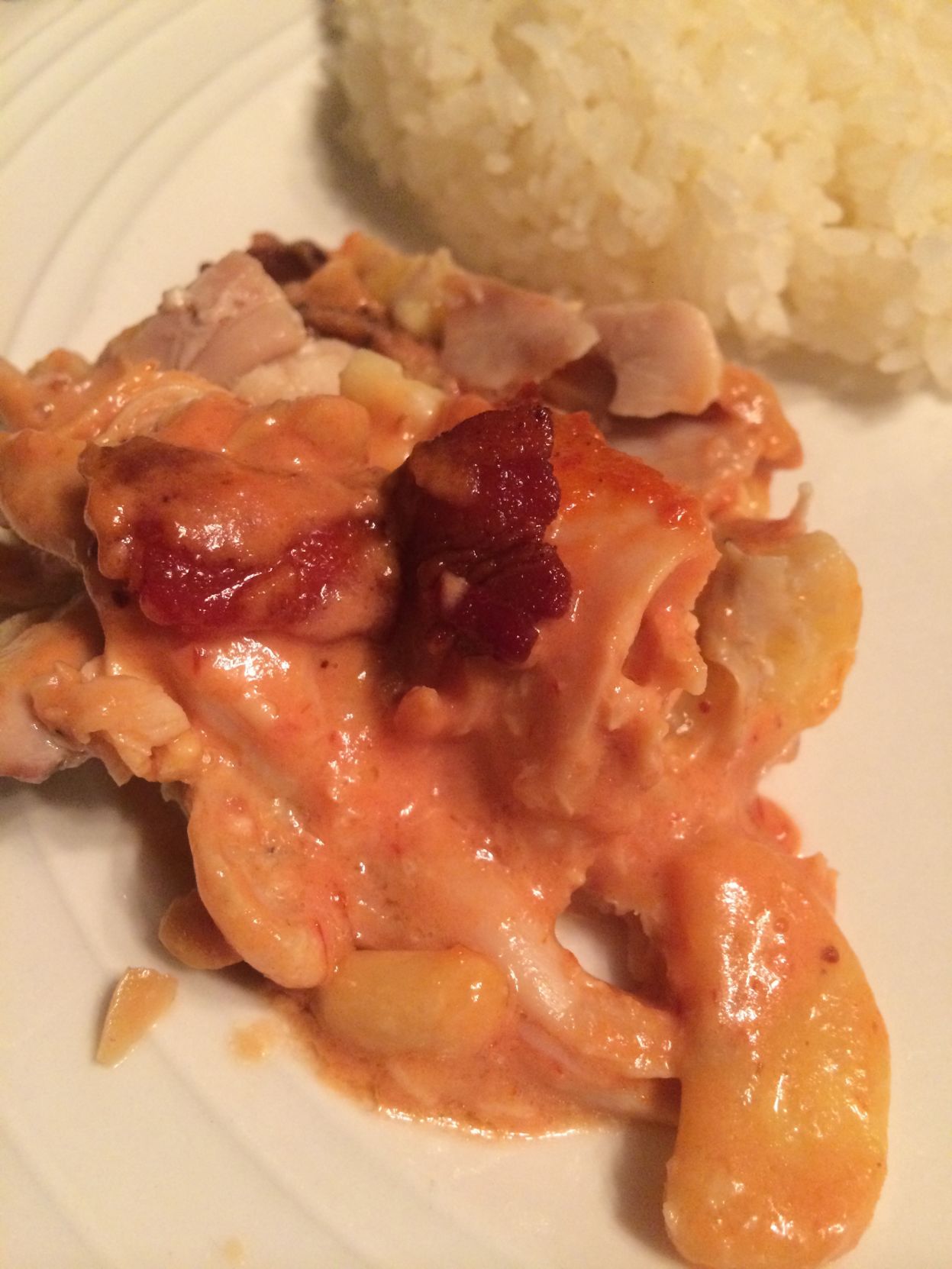 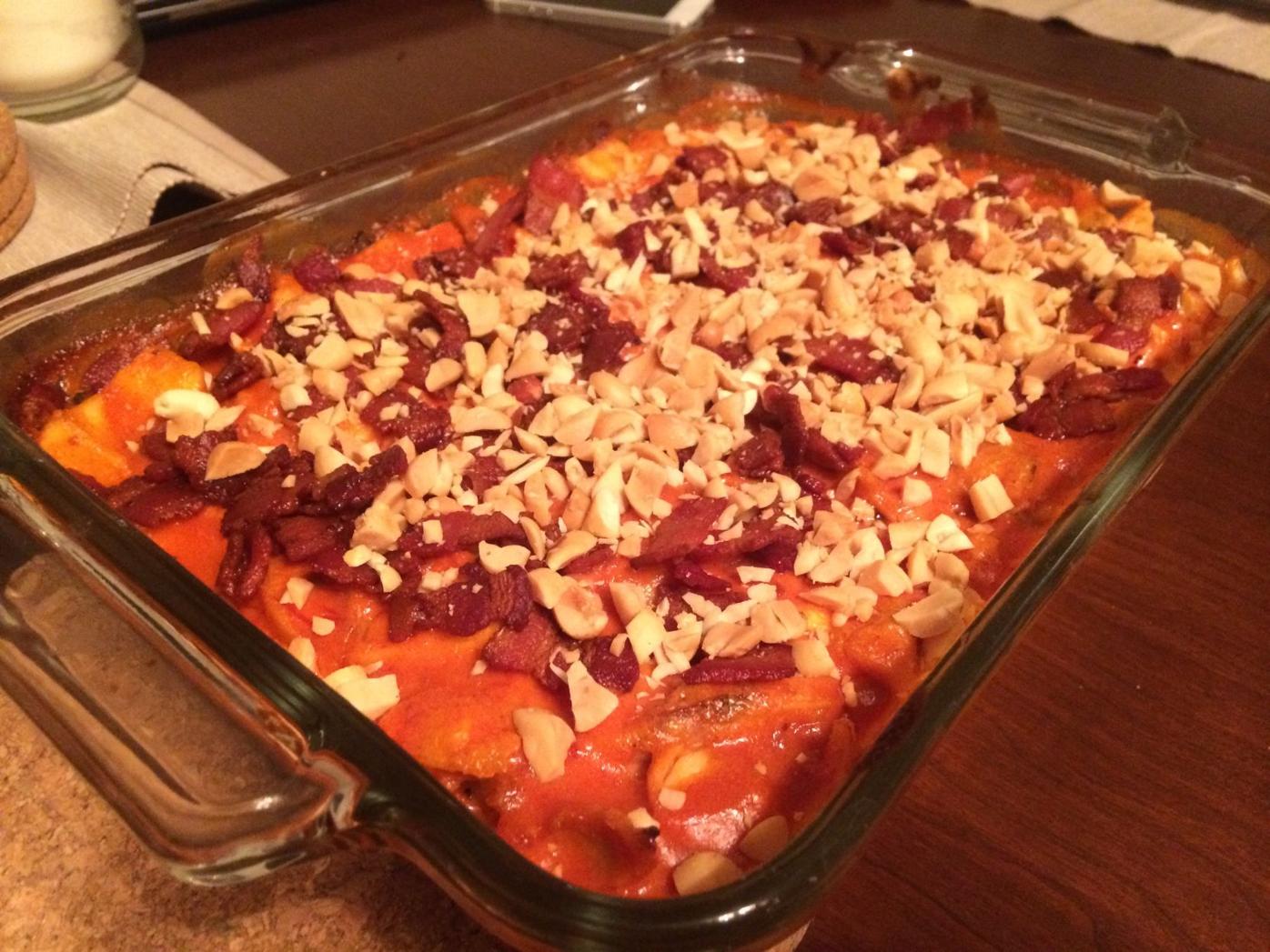 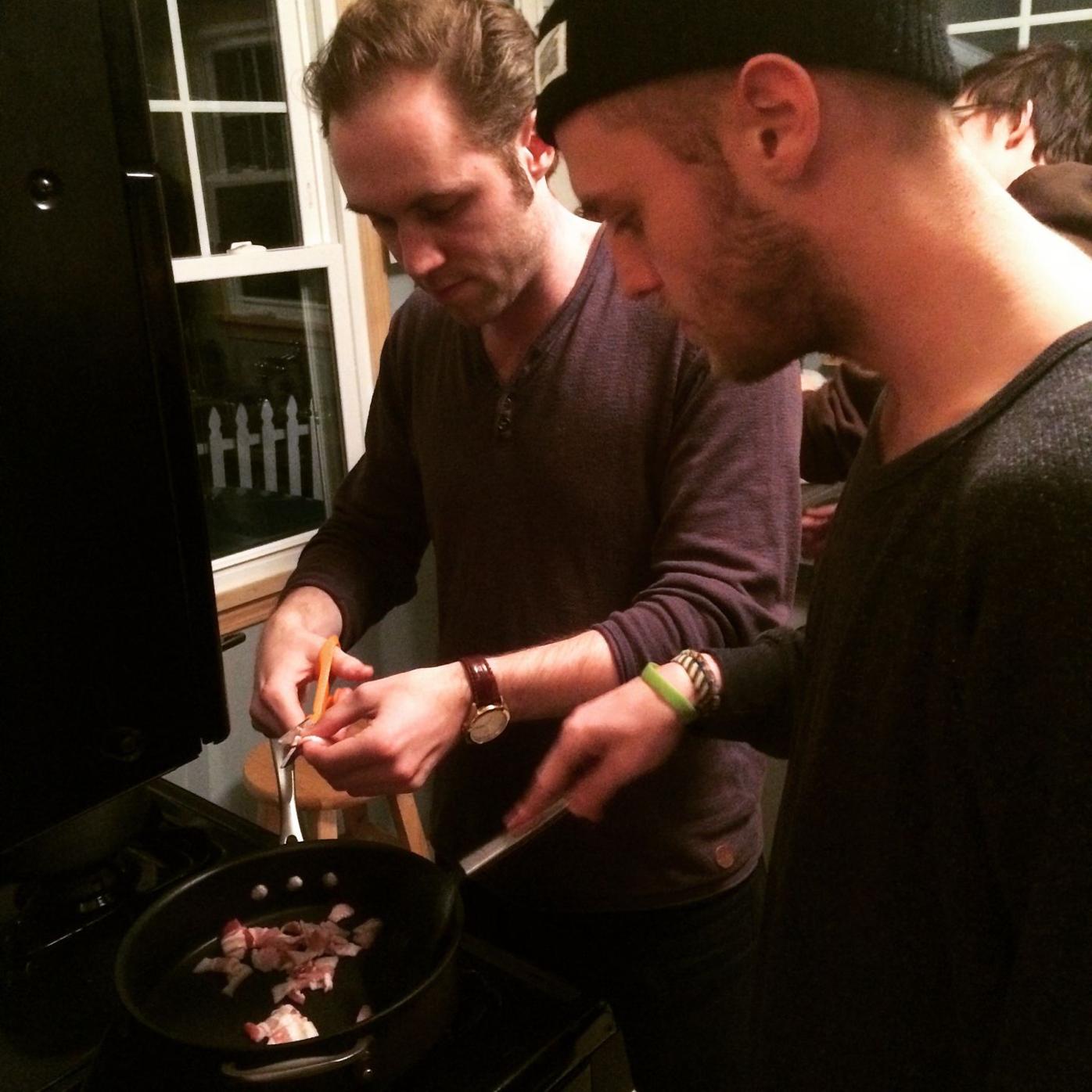 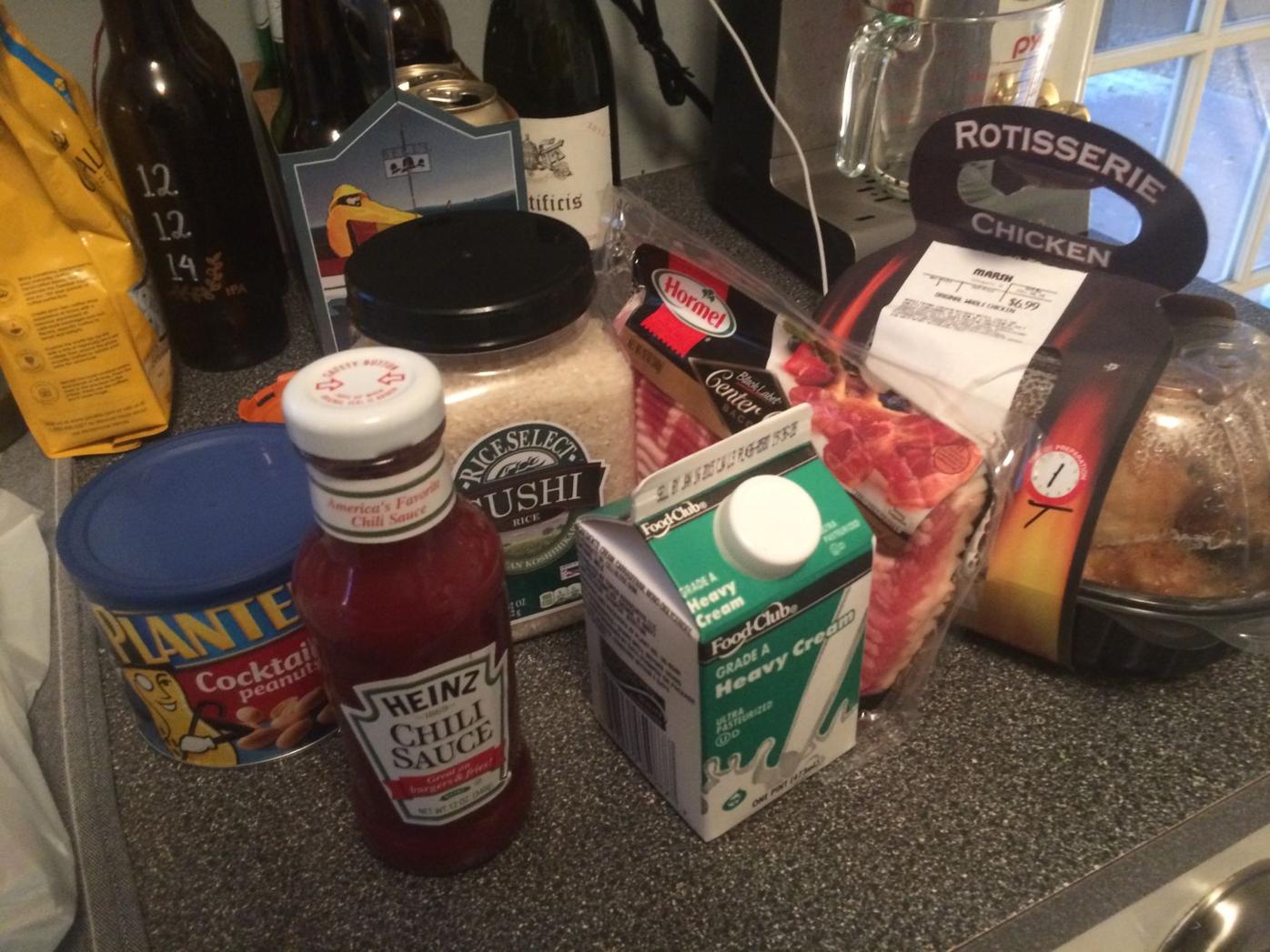 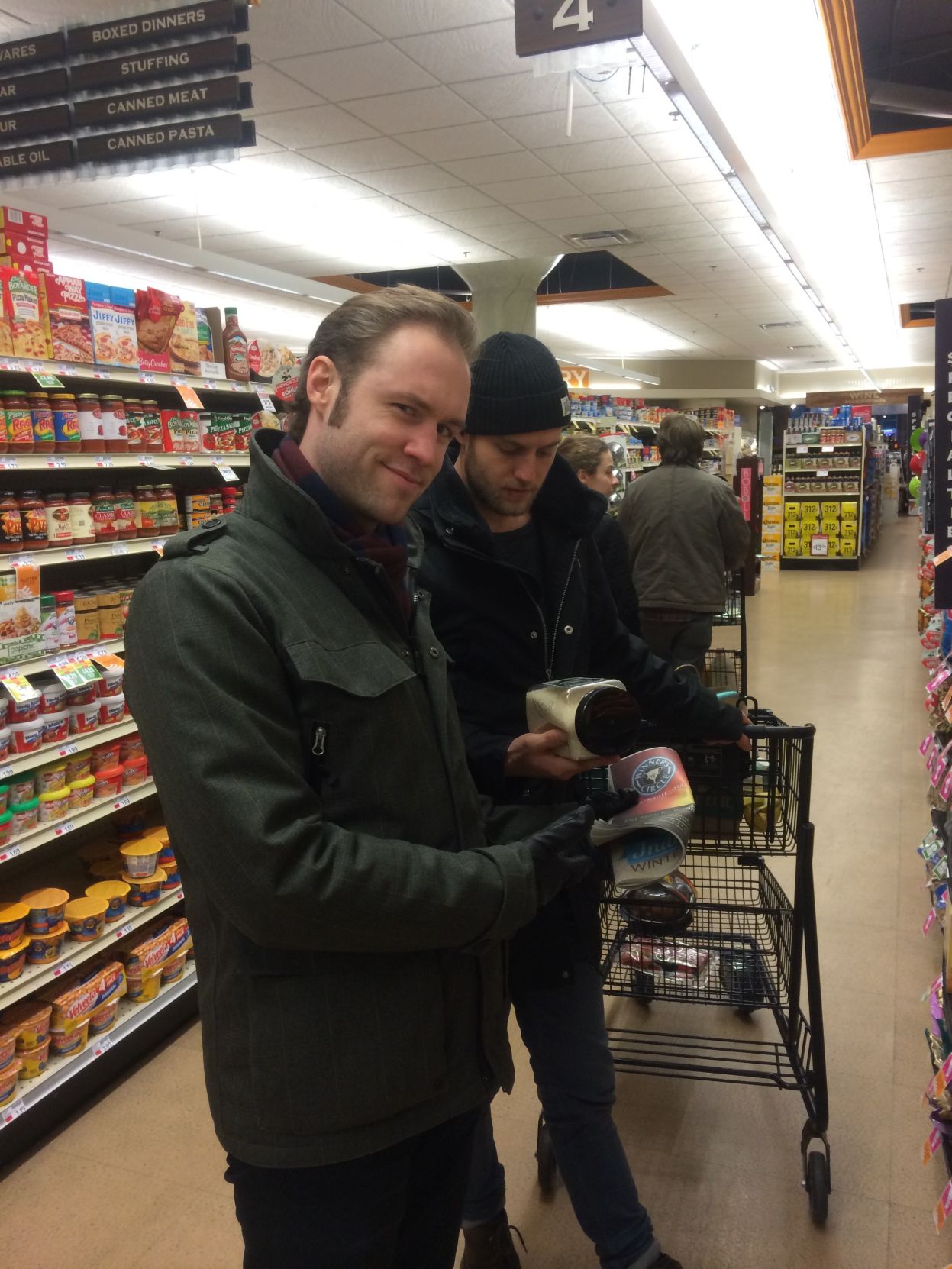 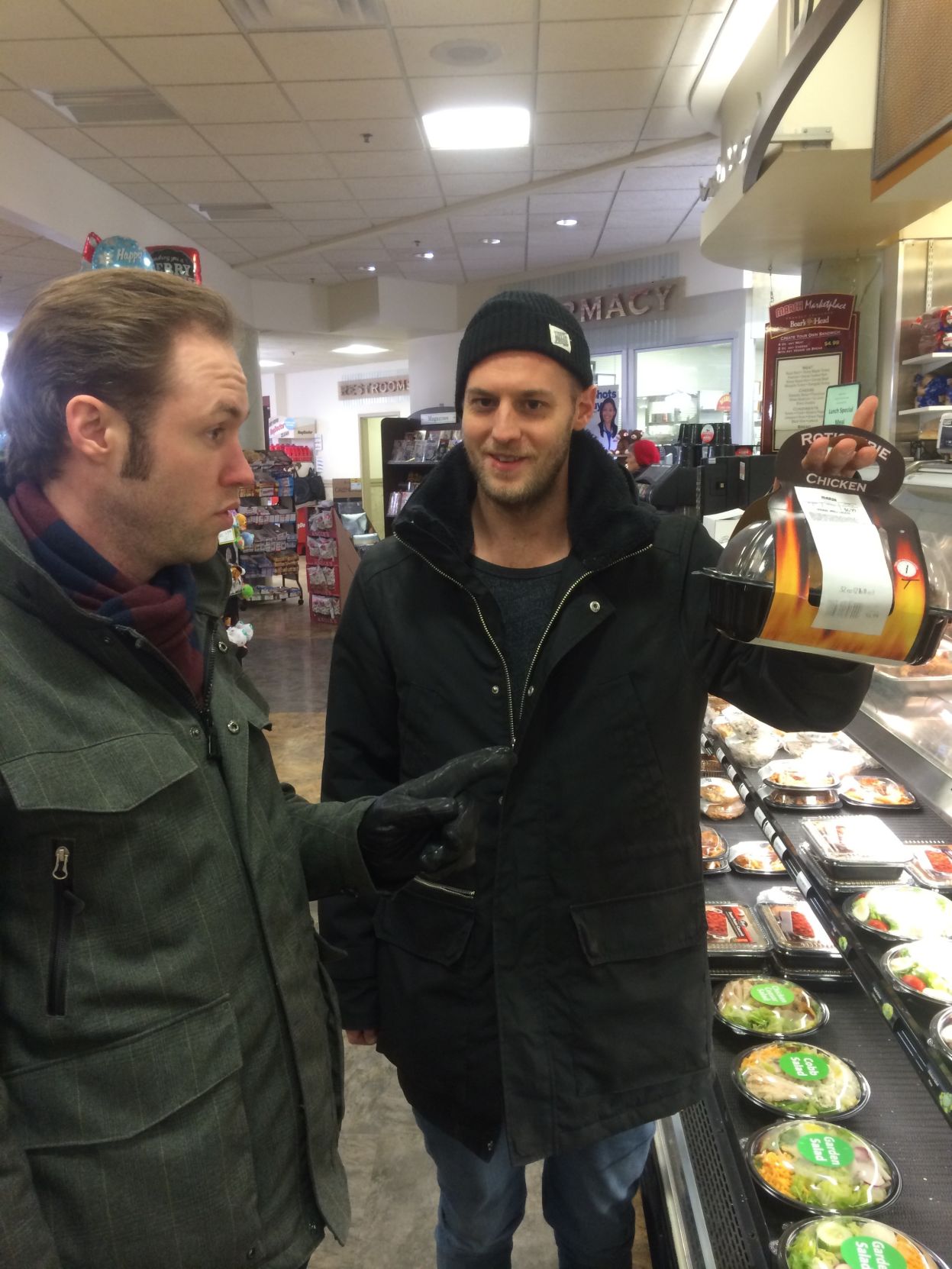 Here’s the thing about Swedish people: they’re an incredibly beautiful collection of folks. My friends Kim and Andreas are no exception. When I went to pick up my friends to do some grocery shopping and cooking, they showed up dressed in classic sweaters and sophisticated overcoats. They read “refined and European” from the street. The Sartorialist would lose it over their day-to-day fashion choices.

So it was a huge relief when I asked them to cook me a dish they eat regularly as refined Swedes and they described a dish that might have been invented by a stoned college freshman in a moment of desperation-meets-ingenuity. Flying Jacob (Flygande Jakob) is, on the page, a truly horrifying mashup of things that, logically, do not belong together. Some might call the Flying Jacob an abomination, and, at least by Biblical definition, that would be correct.

What kind of sick person would mix banana slices with chopped chicken, then smother the whole thing in a cream-and-chili-sauce mix and bake it? And then — AND THEN — top it with chopped cocktail peanuts and bacon?! Why?! Why would anyone do this to perfectly innocent ingredients. It’s like when your teacher would put all the class outcasts and weirdos in one group and just sort of hope they make friends with each other. I hate that person, because I just can’t get into their head enough to pick up on the logic, in the same way that I hate ultramarathoners and the celibate.

But Kim and Andreas promised me that it was consumed often in Swedish households in the same manner that Americans choke down green bean and tuna casserole: a few ready-made ingredients combined to for a quick and filling dinner. It’s workweek food.

“If I were cooking something for someone special,” Kim said in the car, “this would not be it.”

Flying Jacob: the only dish that lets you know right where your relationship stands.

The ingredients cost us less than $25 altogether, and you can use pretty much any rice for it. Kim and Andreas met while studying in Japan with my local buddy Ross Bercot over at New Day, so they made it with sushi rice. Also recommended: jasmine or basmati rice, or brown rice if you’re trying to get some kind of fiber in this thing, which it does not have. Kim recommended it be served with salad for that reason, so you’re looking at a 20 minute dinner at most, with a meal that lasts a few days for two people.

Save yourself some time by grabbing a pre-cooked rotisserie chicken, which will cut your prep time down to about 10 minutes, if that. The chili-cream sauce should cover all your chicken and bananas, so if you run out, the important thing to remember is a 1:3 ratio of chili sauce to cream. We ran short the first time, so this recipe reflects the final amount. There are ways to cut down on the fat, either by using lower fat milk (nothing less than whole though or, well, yuck) but that will make the sauce more ketchup-y tasting. And if you’re a youngin’ and you’re unfamiliar with the Heinz Chili Sauce product of yore, look for it in the ketchup section. Or just use ketchup and put chili powder in it, but it’s really not the same.

When it was all said and done, we set the table and put out the dishes of Jacob and the sushi rice. You’ll never guess what happened.

It was really good. I’m ashamed of how doubtful I was of the flavor combinations. The bananas, weirdly, create a satisfying sweetness against the salt of the bacon and fucking cocktail peanuts. Andreas said you can skip this step if you truly can’t stand the idea of bananas in your chicken, and Kim warned that the bananas will oxidize and look weird as leftovers. But let’s forget this for a second and just appreciate the unimaginable reality of this abomination’s deliciousness. It doesn’t make any sense. It shouldn’t. But damn it all if those Swedes aren’t constantly onto some next-level shit while we’re over here all, “Chili and cream and peanuts? Self-assembly furniture? It’ll never work.”

Talk about eating your words.

Stir cream and chili sauce together, set aside. In a frying pan, fry bacon until crispy and drain, set aside.

Pull all the chicken meat off of the bone. If you want to make it leaner, discard the chicken skin (but do know that you are a monster if you do this). Chop the chicken into chunks.

Slice bananas lengthwise and then cut into ¼ inch slices. Mix by hand with chicken until evenly distributed.

Pour cream-chili sauce over the chicken and banana mixture so that it’s all covered. Bake for 15 minutes until it’s bubbly and rust-red. Sprinkle peanuts and bacon over the top and serve with whatever rice you have.