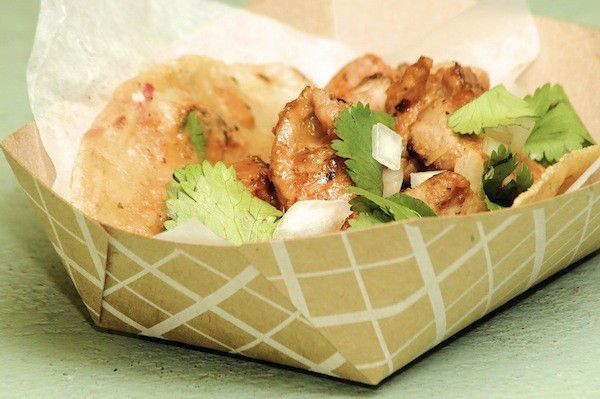 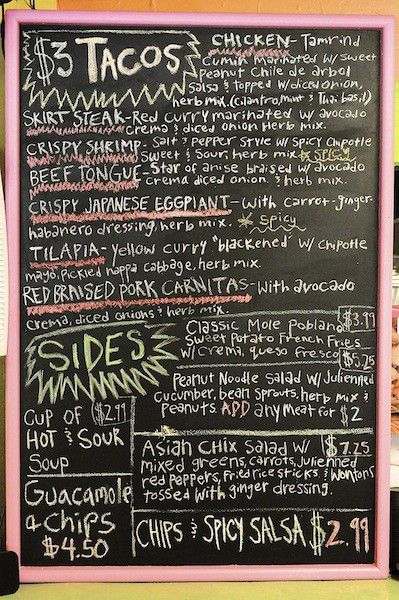 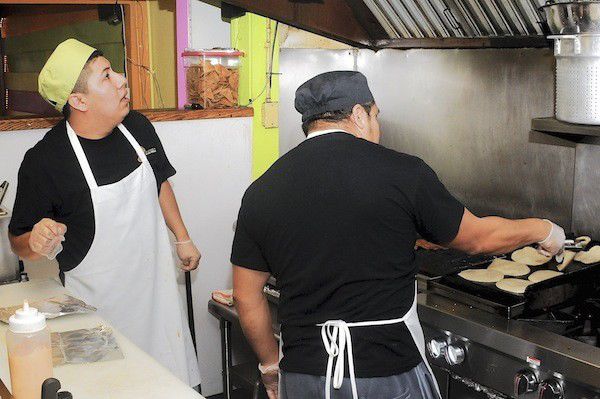 In the kitchen at La Chinita Poblana.

In the kitchen at La Chinita Poblana.

Walking through the doors of La Chinita Poblana, you're surrounded by bold citrus-colored stripes that allude to the robes of the princess fro “The Legend of La Chinita Poblana” that gives the restaurant its name. (We'll tell you more about that in a minute; suffice it to say that the story represents a happy mixing of Chinese and Mexican cultural traditions.)

And if those slightly-offbeat colors don’t give signal that this isn't an ordinary taqueria, the menu items will: chicken tacos spiced with tamarind-cumin and topped with sweet chile de arbol salsa, star-of-anise braised beef tongue with avocado crema, and crispy Japanese eggplant with carrot-ginger-habanero dressing.

Prices are modest — at $3 each, you can feel free to try more than one taco flavor (a lunch special offers 2 tacos, a cup of soup or chips and salsa, and homemade agua fresca for $8). Sides include classic mole poblano sweet potato fries, a peanut noodle salad with vegetables, and hot and sour soup. Desserts include a Thai tapioca pudding with mango and whipped cream, a crispy chocolate banana eggroll or tres leches flan.

The taqueria, now inhabiting the space that once housed Boogie Burger at the corner of Westfield and Winthrop Avenues, can be defined as Mexican-style with an Asian twist. The owner and chef, George Munoz, was a managing partner of the downtown Adobo Grill until he opened the brightly-colored take-out restaurant just two months ago.

A Chicago native who trained at City Colleges of Chicago, Munoz has 20 years restaurant experience under his belt on both kitchen and management sides.

“My friend Patrick McGarvey is a general contractor — he’s been building restaurants for decades — he had the key and was showing the location. I called him up, took a look, and it all happened really fast. From idea to opening was just about 2 months,” says Munoz, who adds with a laugh, “One day over several bourbons, the whole idea took shape.”

Munoz had been thinking on the concept of a fusion taqueria for a while. When cooking for his family he often uses flavor profiles found in Mexican and Asian cooking.

“Broad Ripple needed a taqueria — but I didn’t want to go with a purely traditional version,” Munoz says. “With the fusion concept, it makes sense that I offer bubble tea along with tacos.”

The name of the taqueria reflects these flavors as well. “The Legend of La China Poblana” tells of an Indian princess who was kidnapped and taken to Puebla, Mexico. The locals believed the girl came from China, and she became a curiosity with her brightly-colored robes and head coverings, eventually inspiring the women of the town to dress like the demure beauty.

The story points to a centuries-old cultural exchange between Mexico and the East. Foods such as tamarind and mango that were originally imported from Malaysia and India have now become synonymous with Mexican culinary tradition.

La Chinita Poblana has just one hiccup in the plan so far — because the building is currently restroom-free, Munoz has been unable to get a license to offer seating. While all orders are wrapped to-go, customers are welcome to stand at counters along the walls for instant gratification.

Munoz hopes to acquire an exemption to allow for some seating — Boogie Burger had plenty of seating when it occupied the location — but until then it’s technically a take-out-only restaurant. Maybe that's the only traditional element of this unusual taqueria.