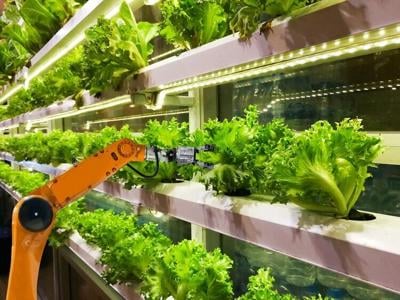 CA former grocery store or an empty strip mall might not be the first image that comes to mind when thinking of places to grow food. But around Indiana, many of these spaces are being turned into vertical farms to help alleviate farmland shortages and greenhouse gas emissions linked to traditional farming practices.

Vertical farming uses controlled environmental agriculture techniques, like hydroponics or aquaponics, to grow crops in vertically stacked rows with 90% less water than traditional soil-based farming. It also uses 75-90% less land than traditional farms and is able to be conducted in industrial areas. It allows the grower to have total control over the growing cycle of the crop.

The technique allows for year-round income for farmers and fresh, healthy, local produce for consumers regardless of climate.

With the world’s population expected to grow to 9.7 billion people by 2050, agricultural production will need to increase by 70%. Vertical farming offers an alternative to scarce farmland and to traditional farming techniques, which cause 22% of the world's greenhouse gas emissions.

In Indiana, farmers can do little outdoors between fall and spring because of low light levels and temperatures, he said.

“But with controlled environmental agriculture, you can produce year-round because you artificially manage the ideal environmental conditions for plants,” he said.

The farmer controls the lighting, temperature, nutrients, water and sometimes even carbon dioxide, but needs to understand plant science to know what is best for the plant being grown, as well as the engineering behind how best to deliver those resources without waste.

“Our research shows that we use about one-third of the water used to grow the same crop in the same acreage outdoors. That’s because we recycle the water; we don’t just add water on top of the plants. In controlled environmental agriculture, the water is recirculated and is delivered to plants in a closed-loop system, where there is no runoff or leaching,” said Nemali.

While such systems do require a large amount of energy use, Nemali said research has enabled farmers to optimize energy use and lower consumption.

But there are limits to what can be grown using these methods.

“Because your investment is high, your return should also be high in order to make profits. There is a technology piece and usually, there is high-intensity cultivation that happens; therefore, growers want to grow high-value crops like vegetables and those that have direct impact to consumers,” said Nemali.

The time for harvesting the vegetables is more condensed as well. For instance, it will take about a month to grow leafy greens, around six to eight weeks for tomatoes and eight weeks for strawberries, instead of an entire season like in traditional farming.

The industry is growing rapidly and creating new jobs in many urban areas because it doesn’t require soil to produce fresh produce.

“A grower can purchase an old warehouse, let’s say 10,000 square feet or a quarter of an acre. But then they can grow 10 or 11 levels vertically, and in doing so, that’s a quarter of acre times 10. So they are actually producing crops that would normally require two-and-a-half acres of land on this quarter of an acre simply by going vertically,” said Nemali.

Nemali said there is a huge amount of interest in vertical farming in Indiana. Indiana currently imports around 95% of its vegetables from outside the state. That means there is potential for large profits in vertical growth.

For example, USDA estimates that each person in the US consumes around 11-13 pounds of lettuce each year, which would roughly equal a salad each week. Nemali estimates Hoosiers consume about $60 million in lettuce each year, but Indiana farmers grow only a fraction of that amount.

“We probably won’t produce $1 million worth of lettuce this year. So there’s a huge demand for local production,” Nemali said. “I’m just giving you one crop; imagine all those vegetables we are importing from outside. If it’s grown locally, that money stays with our growers and our farmers, and that will improve their livelihoods. That is why there is a huge interest in this industry.”

A pioneer in northwest Indiana

One company that has been a leader in the vertical farming industry for a while is Green Sense Farms in Portage.

Before he founded Green Sense, Robert Colangelo spent many years working on a wide variety of environmental issues, from research at Argonne National Laboratories to cleaning and repurposing brownfields. He said he was looking for something new when a friend approached him with an idea to start a vertical farm.

“I became very passionate about it, and I thought this would be a next great step in my environmental career, getting involved in agriculture,” he said.

He said he wished he had gotten involved in agriculture earlier in his career.

“We are not here to put field farms or greenhouses out of business,” he said. “I think as the population grows, we really have to look at what crops grow best outdoors and what crops grow best indoors and just rethink agriculture based on water and soil conservation. When we approach it that way, everyone feels comfortable with vertical farming.”

Green Sense began as an owner-operated farm. Colangelo grew leafy greens and herbs, which he mainly sold in the Chicago and Northwest Indiana markets. However, he now helps other companies or growers develop and build their farms.

Colangelo said while the business side of Green Sense was harder to learn than the growing itself. Knowing where to locate the farm and find the right talent, having the right operating procedures in place and finding the right customer base took longer to learn, but now Green Sense helps others with exactly those issues.

It also designs farms specifically for the crop that the company or individual wants to grow, customizing growing techniques and economic data.

Vertical farming extends to other industries

Green Sense is currently working on several projects, including a casino in Las Vegas that would showcase a vertical farm in its restaurant so the diners could see the food they are eating. It has partnered with a company in Spain to offer combination greenhouses and vertical farms, and it also is considering a project that would turn old grain silos into a combination vertical farm, restaurant and market.

“We’ve learned a lot about what doesn’t work, and we keep striving each day to figure out what works better,” said Colangelo.

Vertical farming isn’t limited to growing food. Green Sense has worked on projects for many different industries, including pharmaceutical companies, tree growing and many others that may seem surprising.

Colangelo believes the future of vertical farming will be highly automated.

“They will still require smart people to run them, but (with) a lot of the menial, repetitive tasks being done by machines. I think the future for farming is bright, and this is a great opportunity for young, smart people to get involved with,” he said.

Piper Halpin agrees. She worked with Colangelo for four years at Green Sense, starting out harvesting and seeding crops before becoming an operations manager. She now is involved in vertical farming in Boston.

“It’s exciting to be a part of and addicting because it is so technology forward, innovative and new,” she said. “Also, you don’t have to live in a rural area in order to be successful.”

Colangelo and Halpin agree the technology aspect is attractive to younger people and helps to engage their interest in the field.

“It’s a great way to get young people reinvolved in agriculture,” Halpin said. “It’s been a cool bridge between old agriculture and new agriculture. I think it’s going to jump start a whole new interest level in ag that was kind of dying off before.”

“They also see the importance of this industry in terms of feeding millions with fresh food, making sure it’s safe and done in a responsible way,” he said.

Nemali would like to see an increase in the variety of crops that can be grown in controlled environmental agriculture, technological improvements that lower energy consumption and more university programs to train workers and researchers for these farms.

“This area is growing, and I want people to see, admire and provide support for it,” Nemali said.
Support from scientists, policymakers, marketers and the government will enable a new workforce to develop the industry in the next 10 to 15 years.