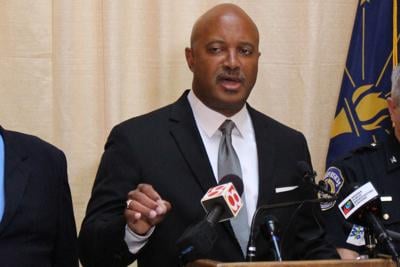 Four women who accused Attorney General Curtis Hill of grabbing and groping them at a party in 2018 have sued him again, this time in Marion Superior Court after a similar case had been dismissed in federal court.

The women—legislative staffers Niki DaSilva, Samantha Lozano and Gabrielle McLemore, and Rep. Mara Candelaria Reardon, D-East Chicago—accused Hill of battery when he touched them inappropriately at the party celebrating the end of the legislative session.

Their lawsuit also says he defamed them by accusing them of fabricating the incidents. The state lawsuit is filed against Hill personally and, unlike the federal lawsuit, leaves out claims against the state.

The 19-page lawsuit that was filed on July 7 recounts the same details as the women’s testimony last fall at Hill’s hearing before the state Supreme Court Disciplinary Commission and in the federal lawsuit, which was dismissed on a technicality.

The incident at the party started when Hill told the women that in order to get a drink they should “show a little skin.” He then went on to inappropriately grab DaSilva, Reardon and McLemore while calling Lozano, “really hot.”

The women say Hill, in denying the accusations, defamed them. In a July 2018 statement on his website he wrote, “The allegations against me, which continue to change, are vicious and false. At no time did I ever grab or touch anyone inappropriately.”

However, former state Supreme Court Justice Myra Selby, the hearing officer for the disciplinary commission, found the women’s stories credible. She recommended a 60-day suspension of his license to practice law, but the state’s higher court only imposed a 30-day suspension, which Hill has already served.

Hill lost his bid for a second term as attorney general to former U.S. Rep. Todd Rokita at the Republican state convention, which was held in a virtual format in June. The Democrat on the Nov. 3 ballot is former Evansville Mayor Jonathan Weinzapfel.

Taylor Dixon is a reporter for TheStatehouseFile.com, a news website powered by Franklin College journalism students